Schalke's preparations for demotion are not going to plan 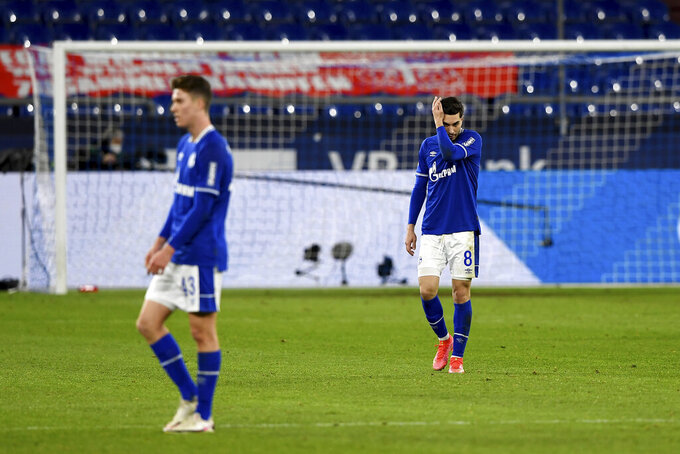 Schalke's Matthew Hoppe, left, and Suat Serdar react on the pitch during the German Bundesliga soccer match between FC Schalke 04 and Borussia Moenchengladbach at Veltins Arena, Gelsenkirchen, Germany, Saturday March 20, 2021. After loosing the match 0-3 Schalke is last in the Bundesliga with little to no hope of survival. (Guido Kirchner/dpa via AP)

BERLIN (AP) — Schalke’s preparations for Germany’s second division are proving as problematic as they were for life in the first.

Last in the Bundesliga with little to no hope of survival, Schalke is trying to lay the groundwork for an orderly demotion, hopeful that the right appointments now can mitigate relegation and restore the club's standing as one of Germany’s heavyweights.

Schalke was Bundesliga runner-up in 2018, when it reached the semifinals of the German Cup. It is a seven-time German champion and five-time German Cup champion. It won its last cup final in 2011.

Schalke had been hoping that former coach Ralf Rangnick would return as sporting director to oversee its rebuilding, but the 62-year-old publicly turned down the offer on Saturday after several days of talks.

“Unfortunately, due to the many imponderables within the club, I cannot see myself taking on the sporting responsibility at Schalke,” Rangnick said.

Rangnick’s agent Marc Kosicke reportedly told Schalke chairman Jens Buchta that the decision was final and there would be no continuation of talks, but Buchta said later Saturday that he was “completely surprised” by the decision and that he still hoped Rangnick can be persuaded to return.

It’s just the latest sign of dysfunction at a club that is currently on its fifth coach of the season. The little-known Dimitrios Grammozis was appointed coach earlier this month following a purge of senior club staff that saw Schalke firing its coach, sporting director, team coordinator, lead fitness coach and assistant coach.

Grammozis, who may have been one of the few candidates willing to take on the job, has one point from his two games in charge.

Each of the goals in Saturday’s 3-0 loss at home to Borussia Mönchengladbach – a team that had lost its previous seven games across all competitions – illustrated why Schalke has lost all hope of survival.

Brazilian defender William was at fault for Gladbach’s first, Stefan Lainer was left completely free to head the visitors’ second, and Schalke goalkeeper Frederik Rönnow’s own goal completed another game to forget.

Supervisory board member Stefan Gesenhues resigned on Sunday, possibly due to the fall-out from Rangnick’s decision. The club did not give any further details.

Schalke’s boardroom has been plagued by upheaval since former chairman Clemens Tönnies stepped down last June. He finally bowed to pressure after a huge outbreak of coronavirus infections at one of his company’s slaughterhouses, but had been under fire from Schalke fans since making a racist comment about Africans at a public meeting in Paderborn in August 2019.

Tönnies was on the board for 26 years and had spent 19 as chairman. Buchta, who was vice chairman at the time, said the club “very much regrets Clemens Tönnies’ decision.”

Schalke has been hard hit by the coronavirus pandemic. Even before the Bundesliga’s two-month suspension last year, Schalke had debts approaching 200 million euros ($225 million).

Huntelaar arrived with an injury and has made just two substitute appearances in Schalke’s 11 games since. The Dutch forward is Schalke’s second highest ever goal-scorer from his first stint at the club – only West Germany forward Klaus Fischer scored more – but Huntelaar is 37 years old and no longer at his best.

Huntelaar’s return epitomizes Schalke’s yearning for former glory. The club won the UEFA Cup in 1997, and regularly competed in the Champions League in recent seasons. It reached the quarterfinals of Europe’s premier competition in 2019.

Those days seem far away now with just one win in the Bundesliga all season and the outlook is bleak. Schalke has 10 points from 26 games played and is already 14 points from safety with eight rounds to play. The team has conceded 69 goals in those 26 games, 18 of which ended in defeat.

“We caused the goals ourselves, we made the mistakes,” Huntelaar said after the latest loss. “We simply make too many decisive mistakes, and we don’t do enough in attack. But we want to give a good impression, especially for ourselves.”