As school workers get vaccine, Wolf puts police, others next 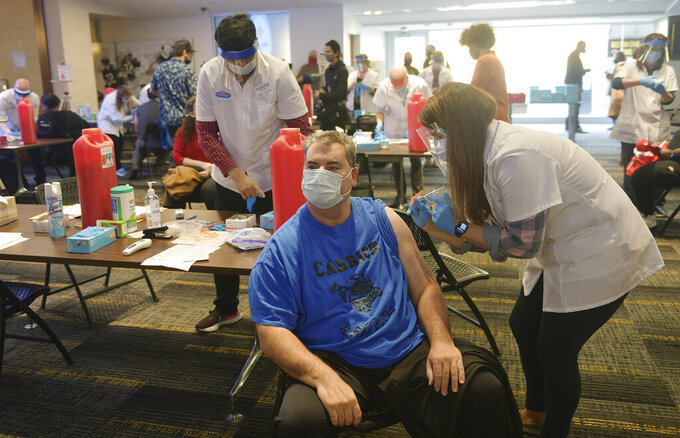 Wolf also said he was confident that Pennsylvania will meet President Joe Biden's directive to make everyone eligible for a vaccine by May 1.

“We can meet that timeline,” Wolf said, appearing by video with lawmakers on a vaccine task force. "We want to get everybody vaccinated as quickly and fairly as possible. That’s what we’re trying to do here.”

Sen. Ryan Aument, R-Lancaster, a vaccine task force member, said the plans mean “a spring of hope is upon us.”

“Much work remains,” Aument said. “But we are turning the corner and dramatically improving the process.”

Wolf said planners have to figure out how those doses will be administered, suggesting it could take many forms.

Wolf said all who currently qualify for the vaccine, the so-called “1A” group that includes older people and those whose medical conditions put them at risk, should be able to get an appointment for their first shot by month's end.

The administration says nearly 1 million Pennsylvanians over 65 have received at least one dose of a COVID-19 vaccine. Wolf said the state is currently averaging some 70,000 vaccines a day, and was encouraged that more than 114,000 were vaccinated in Pennsylvania on Thursday.

Some of the Johnson & Johnson vaccines will go to regional clinics starting in April. The shape and form of those clinics is a work in progress, and Wolf said the County Commissioners Association of Pennsylvania is involved.

Pennsylvania’s program to vaccinate teachers and other school workers, starting in the youngest grades, immunized more than 6,500 people in its first days, officials said.

The Wolf administration said 10 of the school clinics are up and running. Ten more were expected to become operational on Friday and the other eight should begin over the coming weekend. They are organized around the state’s regional schools network known as intermediate units.

In this first round, the clinics are administering the state’s allocation of the Johnson & Johnson vaccines to school employees in kindergarten through third grade, as well as those working with students with disabilities and students learning to speak English.