Scientists to Spanish politicians: 'You rule but don't know' 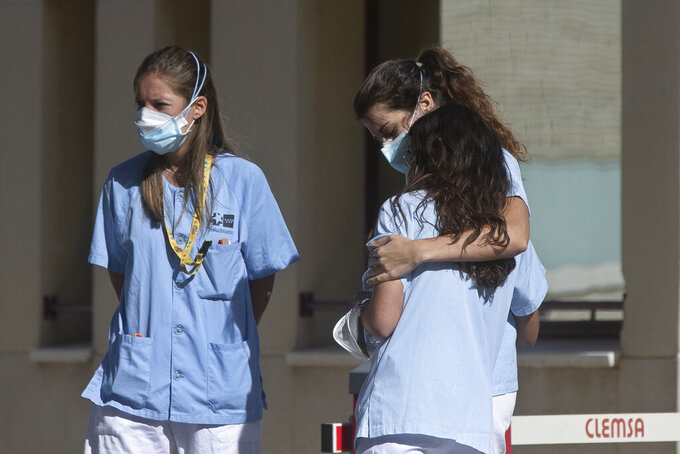 A health worker hugs her colleague during a break outside hospital in Madrid, Spain, Monday, Oct. 5, 2020. Madrid has been the source of Europe’s most worrying surge of infections in the ongoing second wave of the pandemic. (AP Photo/Paul White)

MADRID (AP) — Although the speed of new coronavirus infections is waning, hard-hit Spain has accumulated more than 800,000 cases since the beginning of the pandemic as scientists and health workers redouble their criticism for how the country's politicians have responded to it.

The health ministry on Monday confirmed 23,480 new infections for the previous three days, bringing the total caseload to 813,412. The two-week infection rate per 100,000 inhabitants has come down from 286 cases on Sept. 23, a peak for the second wave that Europe is experiencing since the end of the summer, to 254 on Monday.

“These are still very high incidence rates that are keeping us in a situation of high risk,” said Fernando Simón, the ministry’s top coronavirus expert, warning that delays in reporting the weekend data could be underplaying the true extent of the virus spread.

Hospital admissions have kept increasing, slow but steadily, according to the latest available data. Over 9% of normal beds and more than 18% of intensive care unit beds are devoted to treating COVID-19 patients at the national level, although the situation is far worse in the most affected areas.

Madrid, with 586 new coronavirus infections per 100,000 residents in the past two weeks, has been the source of Europe’s most worrying surge of infections in the ongoing wave. The region has also been the battleground between the left-wing national government and the conservative regional authorities, who have gone head-to-head over how to rein in the outbreak.

Nearly 4.8 million people in the Spanish capital and nearby towns are since last Friday restricted to stay within their municipalities, having to justify trips in and out for work, study or to conduct indispensable administrative or legal errands. Attendance and opening hours of shops and restaurants are also affected and social gatherings remain limited to a maximum of six people.

After weeks of the political kerfuffle over Madrid, scientific groups representing over 170,000 health workers urged Spanish politicians to base their response to the coronavirus pandemic on science rather than politics.

Under the headline “In health, you rule but you don’t know, 55 scientific societies published a 10-point manifesto that began saying that “decisions must be based on the best available scientific evidence, completely detached from the continuous political confrontation.”

The manifesto was published Sunday in all of Spain's major newspapers and had received more than 24,000 online backers on Monday.

Few changes were noticeable in Madrid on the first working day of the restrictions, with many workers and students filling up commuter trains in and out of the Spanish capital. Owners of small businesses, including restaurants, did notice a trickle in the flow of customers.

“I don't see things very different," said José Carlos Herrero, a 69-year-old who was strolling in the central Puerta del Sol square. “There is a bit less people in the streets, but I don't think that should be worrying.”

The cities of León and Palencia, home to more than 200,000 people in northern Spain, will also implement similar partial lockdowns from Tuesday, the Castilla-León regional government announced Monday. Both cities have confirmed more than 500 cases per 100,000 residents in the past 14 days, which has become the national benchmark for imposing new restrictions since last week.

Expressing disagreement at how some regions and the central government have come up with the criteria, the scientists called in their manifesto for the national standards to be based on science and to guide regional health policies.

They also called for less red tape in adopting measures against virus outbreaks and an end to interference in medical decisions.

Addressing “politicians," the scientists write: “On behalf of more than 47 million Spaniards, including you and your families, we have to change so much political, professional and human inconsistency.”

With 139 new fatalities recorded on Monday, Spain’s confirmed death toll for the new virus reached 32,225, although official excess death statistics show that thousands more have died without being tested.

Alicia León contributed to this report.