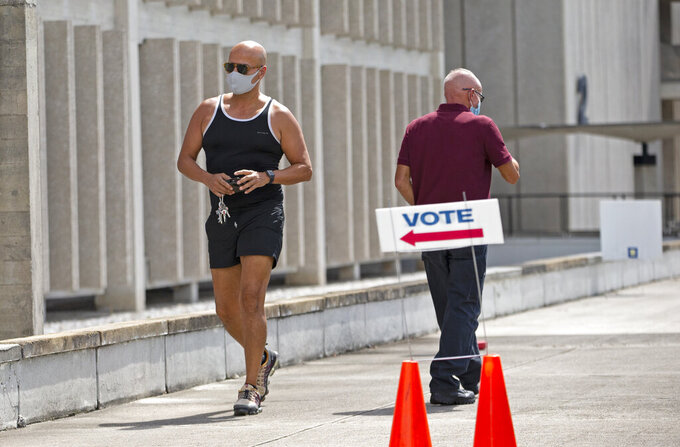 A polling workers leave as a man walks to the polling place for casting his vote during early voting for the primary election at the Miami Dade College North Campus located at 11380 NW 27th Avenue in Miami on Sunday, August 9, 2020. (David Santiago/Miami Herald via AP)

The Lakeland City commissioner's victory came in a primary where many people voted by mail because of the coronavirus pandemic. As of Tuesday morning, more than 2.2 million people had cast mail-in ballots with more still coming in. That compares to fewer than 1.3 million in the 2016 primary. Unlike 2016, when there were primaries for U.S. Senate that helped drive up turnout, there were no statewide races on the August 2020 ballot.

The U.S. Department of Justice is investigating Spano for alleged campaign finance violations. The House Ethics Committee was looking into allegations that Spano borrowed more than $100,000 from two friends and then loaned the money to his campaign. But it paused the review when the criminal investigation began.

“Politically, ideologically we’re pretty close on the issues, but with the ethics and the investigations hanging over him it just really made the seat vulnerable, and that was my concern,” Franklin said. “This has been a conservative, strong conservative seat, for decades and I was fearful of that seat being flipped in November.”

The district sits east of Tampa in central Florida and has traditionally voted Republican. Franklin will face Democrat Alan Cohn, a former television journalist who had raised about $600,000 for the race as of July 29.

Spano was the eighth incumbent House member to be defeated in party primaries this year. That’s double 2018’s total and the most since 1974 to lose in a year when the nation’s congressional districts hadn’t just been redrawn to reflect a new census, which happens every 10 years.

The 32-year-old Cammack owns a political consulting firm and previously served as Yoho’s deputy chief of staff and his former campaign manager. She prominently featured her connection to Yoho during the campaign.

Cammack beat a Republican field of 10 candidates in the firmly Republican district that runs from Ocala to just south of Jacksonville.

“It's a very humbling experience winning a 10-way primary,” she said. “It's a sign that there's a next generation of conservatives coming up and we're ready to start a new squad on Capitol Hill.”

Florida will also elect a new member of Congress in a strongly GOP district in southwest Florida, where U.S. Rep. Francis Rooney is stepping down after two terms. Nine Republicans faced off in the primary to replace him in a race that was too close to call late Tuesday.

In Broward County, Sheriff Gregory Tony claimed victory in the Democratic primary over his predecessor, who was fired after the Parkland massacre. Tony replaced Scott Israel in 2019 after Gov. Ron DeSantis dismissed Israel over his handling of the 2018 shooting at Marjory Stoneman Douglas High School that left 17 dead.

In a Palm Beach County congressional district, far right conservative Laura Loomer won the Republican primary to face Democratic U.S. Rep. Lois Frankel. The district is firmly Democratic, and Frankel has been a political fixture there for decades. Loomer has been banned from some social media sites, but has a large following and has raised $1.2 million for the race — even more than Frankel.

While President Donald Trump has raised questions about the potential for fraud in voting by mail, he later walked back his comments, at least as far as Florida was concerned, and requested a mail-in ballot of his own.

Catharine Skipp voted by mail for the first time ahead of the primary because she has largely confined herself to home during the pandemic. The 66-year-old Democrat and native Floridian lives in Miami-Dade County, the area hardest hit by the virus.

Skipp praised the system, even after elections officials questioned the signature on her ballot. She was given notice that her signature was challenged and given plenty of time to correct it.

“I was impressed. It felt very secure. Very on top of it,” she said. “They questioned my signature in an efficient way. And then I got an email that they had received my cure affidavit and everything was cool.”

Democrats now have the registration edge in Florida, but independents can, as usual, make all the difference. As of June 30, Florida had nearly 4.9 million active Republican voters and more than 5.1 million active Democratic voters.

Florida Secretary of State Laurel Lee said she contacted the U.S. Postal Service to make sure ballots in the mail would be expedited and election supervisors had "taken health precautions to keep others and election workers safe and to mitigate the spread of COVID-19.”

James Collins, 69, a retiree in Fort Lauderdale, said that because he was “a bit apprehensive because of the pandemic," he went to his polling station early in the morning Tuesday, donning vinyl gloves and a face mask.

“No one was there except the poll workers. It was very quick,” Collins said.

This story has been updated to correct Loomer's first name. It is Laura, not Laurel.