Scottish grandmother climbs a mountain, one step at a time 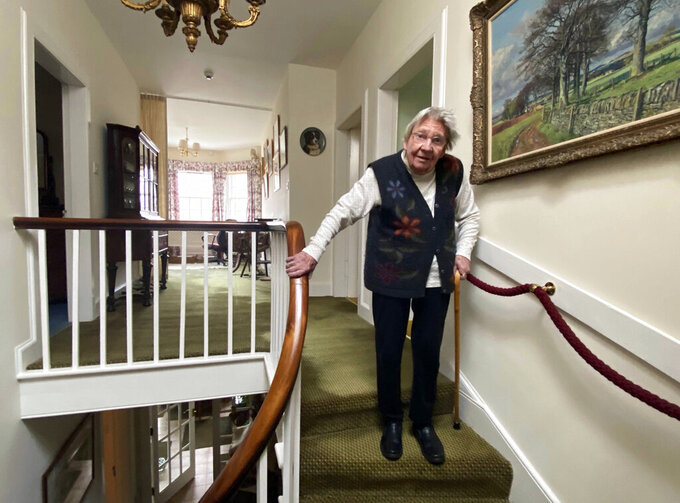 In this undated family handout, Margaret Payne poses for a photo on the stairs of her home in Sutherland, Scotland. Payne, the 90-year-old grandmother who launched an epic climb to raise money for charity completed her fundraiser Tuesday, June 23, 2020 scaling her home’s stairs the equivalent of 731 meters (2,398 feet). That's enough to reach the top of the iconic Scottish peak, Suilven. The feat took her 73 days and kept her busy for 10 weeks while the nation sheltered in lockdown due to the COVID-19 pandemic. (Payne Family via AP)

LONDON (AP) — In the end, Margaret Payne scaled her mountain, one step at a time.

The 90-year-old grandmother who launched an epic climb to raise money for charity completed her fundraiser Tuesday. Paybe scaled the stairs at her home the equivalent of 731 meters (2,398 feet) — enough to reach the peak of Scotland's iconic Suilven mountain.

Payne, who is from Ardvar in the Scottish Highlands, calculated that climbing 282 flights of her staircase would get her to the top of a mountain she climbed only once, when she was 15.

“I just climbed a few stairs every day until I got to the top, 282 times,’’ Payne told The Associated Press. The feat took her 73 days and kept her busy for 10 weeks while the U.K. sheltered in lockdown due to the COVID-19 pandemic.

Payne took on the challenge after being inspired by military veteran Tom Moore, who completed 100 laps of his garden just before his 100th birthday to raise money for the National Health Service. The feat captivated the lockdown nation, and Moore ended up raising some 33 million pounds ($40 million).

Watching his feat on television, Payne's daughter, Nicky McArthur, told her mother, “Look at what Tom is doing. We should turn your stair climbing into something.’’

Suddenly, Payne's regular exercise routine on wet and windy Scottish days was transformed into her own fundraiser for the NHS in gratitude for the care for her husband, Jim, received before he died on Christmas Day last year. Three other charities, NHS Highlands, Highlands Hospice and RNL will also benefit.

Her desire to help struck a chord in a country where 42, 927 people with the coronavirus have died and the efforts of the NHS have been heralded as nothing short of heroic.

Payne has raised 416,000 pounds ($521,000), much of which came in small donations from people who were struggling in the pandemic. Among her many fans are Prince Charles and his wife, Camilla, who wrote Payne to praise her accomplishments.

“There could hardly be a better example of this indomitable spirit than your own magnificent efforts in raising money for vital charities,’’ Charles wrote. “It is people like yourself who show that, for every hardship there has been a hero - or, of course, a heroine.’’

Payne seemed properly pleased with completing her epic climb, in part because it helped her show herself what she could do, to move past her own personal grief and to help others. Her telephone keeps ringing sometimes with reporters, sometimes it is just people who want to cheer her on.

“I can’t imagine myself ever doing anything like this again,’’ Payne said. “But I think that it is important, as you get old, that you don’t sit back and think ‘I’m getting old, I can just relax.' If you want to keep going, you must keep active, and keep walking.’’