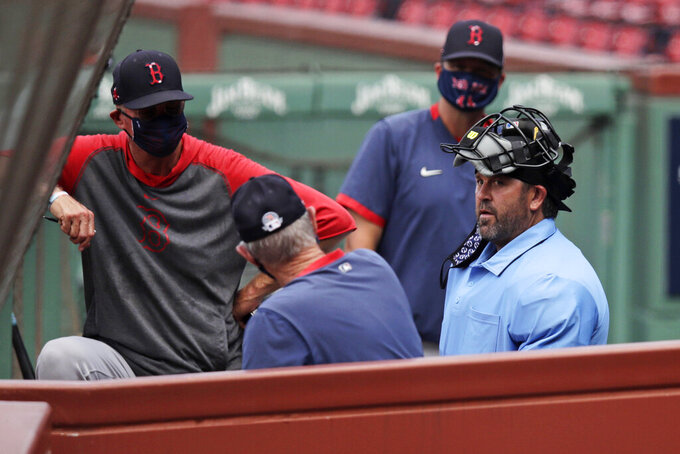 It’s a long sprint, because Andreoli was playing center -- the only outfielder in the game at the time. The ball fell just out of the reach of his outstretched glove as Devers coasted into second base.

And then a voice echoed off the empty Fenway seats: “Out!”

Welcome to the Boston Red Sox summer camp, a reboot of the spring training that was aborted in March because of the coronavirus pandemic. With its intrasquad scrimmages of 5½ innings and automatic outs to make up for the eight (and later down to seven) fielders, it looked more like the world’s fanciest sandlot on Thursday than a major league team getting ready for the season.

“It seems like everything is just a little bit off,” manager Ron Roenicke said in a video call from one area of Fenway Park to reporters sitting in another. “I thought it was pretty good for what it was.”

A week after reporting for training camp and just 15 days before the start of the reconfigured, 60-game season, the Red Sox split up into opposing dugouts and the home team notched a 4-0 victory over the visitors.

Andreoli, a non-roster invitee who had 61 at-bats with the Orioles and Mariners last season, curled a three-run homer into the empty seats beyond the Pesky Pole. Technopop music broke out during his home run trot, replacing the sounds of cheering fans; after crossing home plate, he knocked cleats with his teammates in celebration instead of the usual, unsanitary high five.

Potential opening day starter Nathan Eovaldi pitched four innings, allowing one hit, a walk and a hit batter while striking out four. He said the players and their surroundings were sprayed with disinfectant between innings, but otherwise he was too focused on his performance to notice much that was unusual.

“It’s just so quiet while you’re out there competing,” he said. “That’s just the biggest difference to me.”

Roenicke said he wanted the pitchers to have as close to a real experience as possible, which is why he went with a full infield while leaving the outfield incomplete. And that’s why Jason Varitek, the former Red Sox catcher who is now a special assistant to Chief Baseball Officer Chaim Bloom, was dressed in full umpire’s gear and calling the game.

“I actually had to do a double take,” Roenicke said. “He was saying it’s important to get this as close as we can to a real game.”

Devers had been semi-isolating at the team’s auxiliary field at Boston College because of a possible COVID-19 exposure, but he joined his teammates at Fenway on Wednesday after testing negative three times. He had three at-bats on Thursday and did not get a hit.

“Everything is strange," Devers said, adding that he usually chews on gum and sunflower seeds during games but is trying to get used to the new ban on spitting. “That’s something that we’re not supposed to be doing, as well. Everything is really strange but obviously we have to adapt.”

Roenicke said the team will play six innings on Friday, starting at noon instead of 2 p.m. to try to beat some bad weather. The Red Sox will also be piping in noise as an experiment, like leagues in Taiwan and Korea have done, with an eye toward the fan-free regular season.

“So hopefully it won’t be quite as quiet. It is quiet today," said the 63-year-old manager, who didn’t sit in the manager’s usual spot in the dugout “because there’s too many people there.”

“I think we’re just constantly adjusting to things and trying to figure it out,” he said.