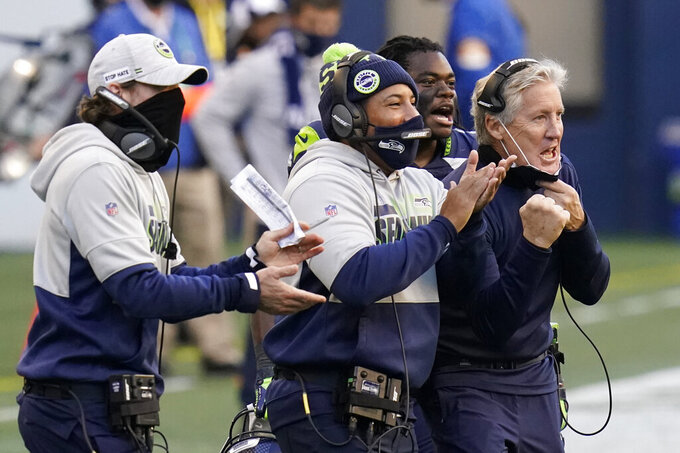 Seattle Seahawks head coach Pete Carroll, right, reacts with running back DeeJay Dallas, second from right, and other coaches after a play against the San Francisco 49ers during the second half of an NFL football game, Sunday, Nov. 1, 2020, in Seattle. (AP Photo/Elaine Thompson)

Seattle Seahawks coach Pete Carroll has signed a multiyear contract extension that will keep him tied with the team well past his 70th birthday.

The Seahawks did not officially announce the deal, but Carroll spoke about it following the Seahawks' 44-34 loss to Buffalo on Sunday.

The new deal is expected to go through the 2025 season and was agreed to earlier this season. Carroll said he didn't feel it appropriate to announce the agreement in the midst of the COVID-19 pandemic.

“For a gesture like this from Jody Allen and the organization and all, and then, at a time when everybody’s suffering and struggling and all that,” Carroll said. “It was something that has been in the works for a long time. I’m talking about way before all the issues that have happened and so it finally came together. Just didn’t feel like it needed to be talked about unless we had to.”

Carroll is in his 15th NFL season as head coach and 11th in Seattle, where he’s led the Seahawks to eight playoff appearances including the Super Bowl championship in the 2013 season.

Carroll’s previous contract ran through the end of the 2021 season after being extended in 2018.

The 69-year-old has a career regular-season record of 139-92-1 and is 150-92-1 including playoffs. He ranks 22nd on the NFL list in wins in both categories, and is three shy of matching Steve Owen, who has 153 wins, including playoffs.

The extension news came with the Seahawks as one of the contenders in the NFC at 6-2.

Carroll took over in Seattle in 2010 after Jim Mora lasted just one season and following a 5-11 finish. Carroll is the Seahawks longest-tenured and winningest coach with a 106-60-1 record. Seattle has finished with a winning record in each of the past eight seasons.