With season over, Rose can begin work of rebuilding Knicks 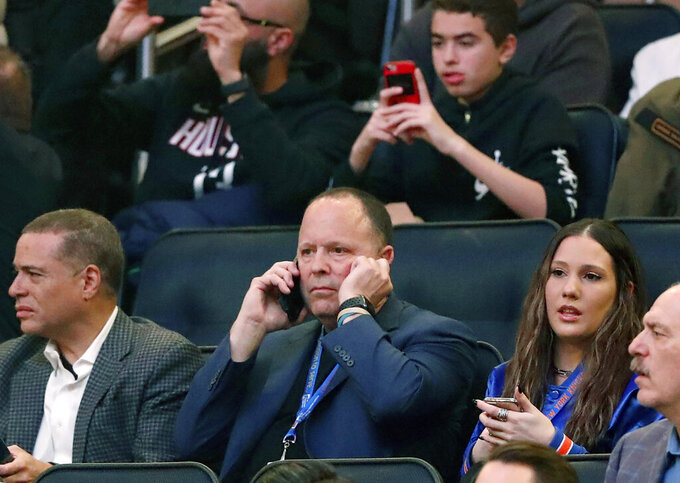 FILE - In this March 2, 2020, file photo, New York Knicks president Leon Rose, center, takes a phone call during the first quarter of an NBA basketball game against the Houston Rockets in New York. Rose didn't have much time to evaluate the Knicks after becoming team president in March. But with their season officially over, he can begin making changes after another losing season. (AP Photo/Kathy Willens, File)

NEW YORK (AP) — Leon Rose took over as Knicks president on March 2, which should have given him a month and a half of season to evaluate his team.

He got a week and a half.

The Knicks played only six games before the season was suspended because of the coronavirus. There will be no more for them, because they are not among the 22 teams who will resume in Florida.

So with another losing season over, the longtime player agent can begin making changes that can perhaps finally move the Knicks in a positive direction.

The Knicks finished 21-45, extending the worst stretch in franchise history by missing the playoffs for the seventh straight season.

The turmoil started early, even by Knicks standards. Coach David Fizdale was fired just 22 games into his second season and Steve Mills was dismissed as president in February.

Mike Miller guided the team as interim coach after Fizdale's departure and had the Knicks defending and competing much better, but Rose is likely to search for yet another new coach.

His plans are unknown. Rose hasn't talked to the media since taking over the job.

He should have opportunities to improve the team through the draft. The Knicks will have another lottery pick this season and own seven first-round picks over the next four years.

Their top pick last year, No. 3 selection RJ Barrett, finished well to average 14.3 points for the season. But Kevin Knox II had an alarming drop in his second season, averaging 6.4 points after scoring 12.8 per game after being taken No. 9 in the 2018 draft.

He needs to bounce back and any new additions will have to perform well to catch up one of the NBA's most punchless teams in an era where offenses rule. The Knicks averaged 105.8 points, ranking 29th in the 30-team league.

Some things to know as the Knicks enter the offseason:

Miller went 17-27 after replacing Fizdale and earned respect for the way he handled the team and all its distractions. But Rose will have intriguing options to consider, including former Knicks assistants Tom Thibodeau and Kenny Atkinson, who reached the playoffs as head coaches. Former Knicks coach Jeff Van Gundy and player Mark Jackson are also available, and Rose has a relationship with Kentucky coach John Calipari.

Second-year center Mitchell Robinson shot 74.2% from the field, leading the league by a wide margin. He hasn't locked up the season title just yet, because the NBA is still determining if the remaining games will count toward regular-season statistics.

Point guard remained a weakness for the Knicks. Neither Frank Ntilikina nor Dennis Smith Jr., both former lottery picks, played well enough to prove himself the answer at the position. Elfrid Payton gave the Knicks their best play at the position, but he battled injuries and played in just 45 games in his first season with the team.

Madison Square Garden executive chairman James Dolan was criticized after the Knicks were the last NBA team or coach to not comment after the death of George Floyd in Minnesota and the protests that followed. The organization finally released a statement on Tuesday that read: “Every one of us has a role to play in creating a more just and equal society, where there is no racism, bigotry, violence or hate. We stand with all who act for positive change.”

Before a victory over Houston the night Rose took charge, Oscar-winning writer-director Spike Lee argued with security guards who blocked him from using the employee elevator to reach his seat. Lee, a season ticket holder for nearly three decades, criticized Dolan for harassing him and told ESPN the following day he wouldn't attend any more home games this season. There ended up being only three more, giving Lee plenty of time to determine if he will come back in 2020-21.