Second mass vaccination closes in Birmingham in a week 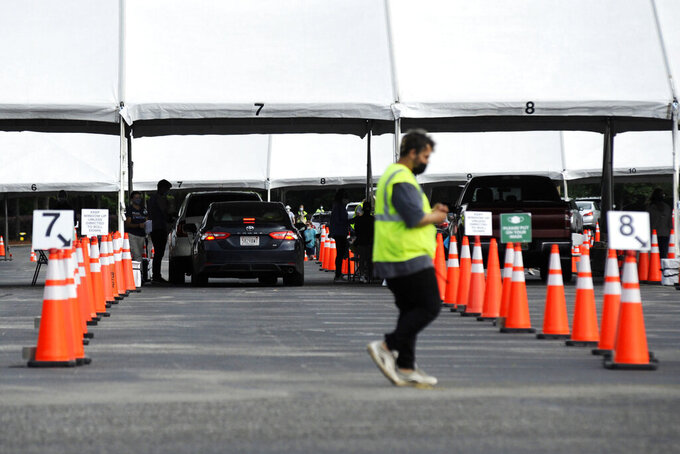 People work at a mass vaccination site operated by the University of Alabama at Birmingham on Tuesday, May 18, 2021, in Hoover, Ala. Across the Deep South, where vaccination rates are the lowest in the nation and mistrust remains high, this site, one of the largest clinics in Alabama already shut down Wednesday and others will follow in the coming weeks because demand for the shot has plunged. (AP Photo/Jay Reeves)

BIRMINGHAM, Ala. (AP) — A second mass vaccination clinic in Alabama's largest metro area is closing within days of an earlier shutdown because of low demand, but health officials said COVID-19 immunizations remain available for most anyone who wants one.

A vaccine site set up outside Birmingham's airport was shutting down Friday because too few people are showing up for shots, Dr. David Hicks of the Jefferson County Health Department told WBRC-TV.

The site was too expensive to keep open when so few people have been seeking the vaccine to protect them from the new coronavirus that causes COVID-19, he said. “First doses went from 1,000 a day, then it dropped down into the hundreds, low hundreds,” said Hicks.

“It’s just that your options are changing from large to smaller venues,” Hicks said. “We know there is a demand from the ages 12 to 15, but the demand is not in the several thousand all at once.”

A mass vaccination site run by the University of Alabama at Birmingham closed on Tuesday in Hoover because of low demand and the high cost of maintaining such operations. UAB has spent about $1.4 million a month operating that location and three others, officials said. UAB will continue providing inoculations at smaller, short-duration clinics as its other large sites prepare to close.

With only about a quarter of Alabama's roughly 5 million people fully vaccinated and the rate of immunizations down sharply in just a few weeks, health officials are concerned that many of those who haven't already received a shot simply aren't willing.

Landers said she spends every day answering questions about the vaccine and addressing a sea of misinformation and concerns.

To combat hesitancy, the state has rolled out a variety of information campaigns, including a new public service announcement featuring University of Alabama football coach Nick Saban asking people to “please get your COVID-19 vaccine” for the sake of having full football stadiums in the fall.

Months into the beginning of vaccinations, immunization rates in the South are generally lowest in the nation and those in the Northeast are the highest.