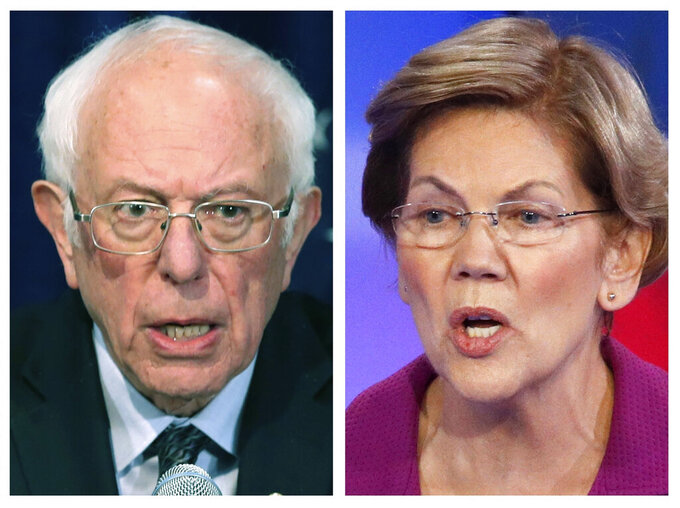 FILE - This panel of 2020 file photos show Sen. Bernie Sanders, I-Vt., and Sen. Elizabeth Warren, D-Mass. The two will address an online event for the Maine Democratic Party on May 31 after the state convention in Bangor was canceled because of the coronavirus pandemic. (AP Photos, File)

PORTLAND, Maine (AP) — Vermont Sen. Bernie Sanders told Maine Democrats on Sunday that “police murder is an outrage” and said that creating a system that values the dignity of all people “starts with justice for George Floyd.”

The former Democratic presidential candidate told a “virtual rally” that replaced the state party convention that the Department of Justice should conduct an independent investigation of all police killings, including the death of Floyd, an African American man, in Minneapolis.

“We need a massive overhaul of policing in America which understands that a lethal response is the last response, not the first response,” he said.

Former Vice President Joe Biden was originally scheduled to participate, but he was removed from the program.

Democratic candidates used their allotted times to tout their positions and to get people fired up to vote Republican President Donald Trump out of office and to defeat GOP Sen. Susan Collins to retake the U.S. Senate.

Tom Perez, chairman of the Democratic National Committee, sought to link Collins and Trump, saying she's voted with him 94% of the time.

“Listen, I've been married over 30 years, and I love my wife. And I love her a hell of a lot better than Donald Trump. But I'm not even sure my wife and I agree on 94% of the things,” he said.

“The fact is Senator Collins was just named the most bipartisan senator for the seventh straight year. She votes with the president when she thinks he is right, and she votes against him when she thinks he is wrong regardless of which party controls the White House,” said campaign spokesman Kevin Kelley.

The event was held as protests, some violent, swept across the nation throughout the weekend following the death of Floyd, who died May 25 after a white Minneapolis police officer pressed his knee on his neck until he stopped breathing.

Sanders decried “systemic racism” against people of color and accused the president of being unwilling to fight injustice.

“What our people want is a nation that respects the fundamental human dignity of every person. That starts with justice for George Floyd. But it cannot and must not end there. We’ve got to end the racism, oppression and massive inequality that currently exists,” he said.

The 2020 state convention was supposed to be held over the weekend in Bangor but was canceled because of the coronavirus pandemic.

It was replaced by the rally that was streamed online, along with virtual elections that started Friday and ended Sunday for delegates to the national convention and for state and national party officers.