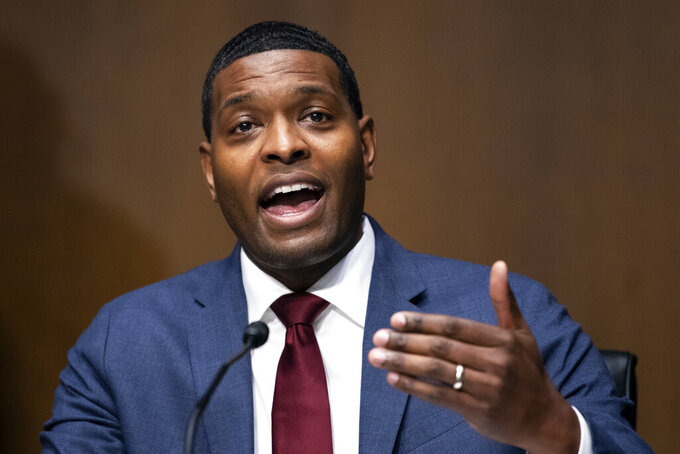 Administrator of the Environmental Protection Agency nominee Michael Regan, testifies during his confirmation hearing before the Senate Environment and Public Works committee on Capitol Hill in Washington, Wednesday, Feb. 3, 2021. (Caroline Brehman/Pool via AP)

WASHINGTON (AP) — The Senate on Wednesday confirmed Ohio Rep. Marcia Fudge to head the Department of Housing and Urban Development and North Carolina regulator Michael Regan to lead the Environmental Protection Agency, picking up the pace for confirmations in President Joe Biden's Cabinet.

Fudge, a veteran lawmaker, will lead the housing agency agency just as Congress has passed new benefits for renters and homeowners who have suffered economic losses amid the coronavirus pandemic.

Regan, who has served as North Carolina’s top environmental regulator since 2017, will help lead Biden's efforts to address climate change and advocate for environmental justice, two of the administration's top priorities. He is the first Black man to run the EPA.

Fudge, who has represented parts of Cleveland and Akron in the House since 2008, is a former mayor and a longtime advocate for assistance for the needy. She said at her confirmation hearing in January that her first priority would be protecting the millions of people who have fallen behind on rent or mortgages due to loss of income during the pandemic, telling senators that “we cannot afford to allow people in the midst of a pandemic to be put in the streets.”

Shortly after she was confirmed — and minutes before she resigned — Fudge took the last vote of her House career in support of the $1.9 trillion COVID-19 relief bill, which will provide billions in housing assistance to low-income households.

Fudge was confirmed 66-34, while Regan was also approved by a 66-34 vote. The Senate also confirmed federal Judge Merrick Garland as attorney general Wednesday.

“These aren’t the nominees that any Republican would have picked for these jobs,” McConnell said ahead of the votes. “But the nation needs presidents to be able to stand up a team so long as their nominees are qualified and mainstream.”

McConnell voted against Regan’s nomination and announced he will oppose New Mexico Rep. Deb Haaland, Biden's choice to be interior secretary. The two nominees both support “far-left policies that crush jobs″ in his state and across the country, the Kentucky Republican said.

Regan and Haaland “both report straight to the front lines of the new administration’s left-wing war on American energy” and would “unbalance the balancing act between conservation and the economic comeback we badly need,″ McConnell said.

He cited Regan’s support for the Obama administration’s Clean Power Plan to reduce carbon emissions from coal-fired power plants, and Haaland’s support for the Green New Deal, a far-reaching, if nonbinding set of proposals to address climate change and reduce economic inequality.

Timing for a vote on Haaland’s nomination has not been set.

Republicans who opposed Fudge’s nomination argued that she was also out of the mainstream. Pennsylvania Sen. Pat Toomey criticized some of Fudge’s past comments about Republicans, saying they could have a “toxic and detrimental impact on the working relationship that ought to be a constructive relationship” between Congress and the Biden administration.

Fudge at the time called Senate Republicans “a disgrace to this nation” and said they ”have no decency, they have no honor, they have no integrity.” At her confirmation hearing, Fudge did not walk back any of her previous statements but described herself as “one of the most bipartisan members in the House of Representatives.”

Democrats argued that Fudge’s experience was right for the times. Senate Banking, Housing and Urban Affairs Committee Chairman Sherrod Brown, an Ohio Democrat who lives in Fudge’s district, noted that Ohio suffered a disproportionate number of foreclosures even before the 2008 economic crisis.

“She knows how for decades, communities have watched as factories closed, investment dried up and storefronts were boarded over,” Brown said. “And she knows how many neighborhoods and towns have never had the investment they should – because of discrimination, because of redlining, because of decades of policy that funneled resources and jobs away from Black and brown communities.”

Senate Majority Leader Chuck Schumer, D-N.Y., said Fudge “has a difficult job ahead of her” as millions of American renters are behind on payments and millions of homeowners are in forbearance.

The COVID-19 relief bill provides about $30 billion to help low-income households and the unemployed afford rent and utilities, and to assist the homeless with vouchers and other support. States and tribes would receive an additional $10 billion for homeowners struggling with mortgage payments because of the pandemic.

Regan is known in his home state for pursuing cleanups of industrial toxins and helping low-income and minority communities significantly affected by pollution.

Sen. Tom Carper, D-Del., the chairman of the environment panel, said Regan has a proven record of forging “practical solutions to clean our air and our water, while building a more nurturing environment for job creation and job preservation.''

One of Regan's biggest challenges will be returning scientific integrity to an agency that under former President Donald Trump frequently allowed business groups and other special interests to “play a large role in crafting the agency’s policies,'' Carper said.

West Virginia Sen. Shelley Moore Capito, the top Republican on the environment panel, said Regan would return the EPA to the policy agenda of the Obama administration, an agenda she said “absolutely devastated my state and other energy-producing states.''

Capito also complained that Regan will take cues from Biden's White House climate adviser Gina McCarthy, a former EPA chief. “For almost two months now unaccountable czar Gina McCarthy has been working both behind the scenes and in front of the press to lay the groundwork for the Biden administration’s agenda,'' Capito said. “She’s operating this stronghold office with no transparency, outside of the Senate confirmation process.”