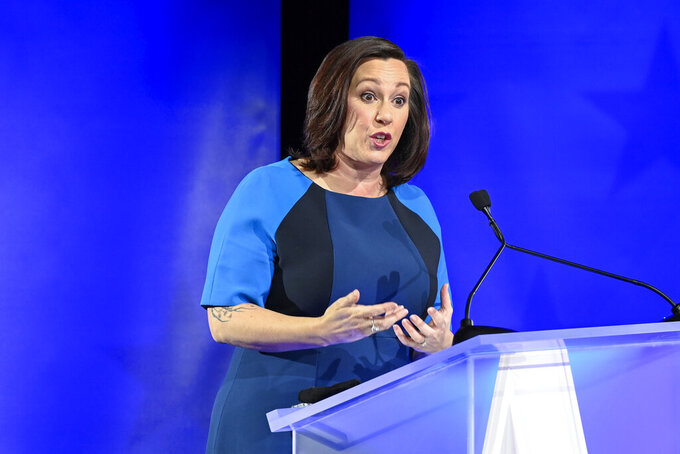 WASHINGTON (AP) — Buoyed by massive fundraising success, Democratic Senate candidates are mounting a push in Republican states that few would have thought possible just a few months ago, placing continued GOP control of the chamber at risk.

The windfall speaks to the energy coursing through a restive Democratic base that hopes not only to oust President Donald Trump, but also to flip control of the Senate, where Republicans have a 53-47 majority. That will be key for Democratic presidential nominee Joe Biden to enact his agenda, if he wins.

But the flood of money flowing to high-profile Senate candidates is so large, it's not at all clear the recipients will have time to spend it. That may inadvertently short low-profile states and candidates who may not engender the same fervor from party activists and could use an infusion of resources. And since much of it is coming from donors outside their states, it's an imperfect measure of the candidates' chances — especially in red states.

“For Jaime Harrison and Amy McGrath, money can buy you a lot of TV advertising,” said Josh Holmes, a Republican strategist and McConnell adviser. “But they are never going to have enough money to buy another 2 million liberal voters in South Carolina and Kentucky.”

The cautionary tale for these candidates is Texas Rep. Beto O'Rourke, who in 2018 raised a record-breaking $80 million for his losing Senate campaign against Republican incumbent Ted Cruz, who was widely reviled by liberal activists and donors. O'Rourke was criticized for being too stingy with his cash, only reluctantly aiding other Democrats, though he eventually donated large amounts to the Texas Democratic Party.

In the days after Ginsburg's death last month, over $100 million flooded in through ActBlue, Democrats' fundraising platform, with Harrison garnering a large chunk.

Harrison's campaign manager, Zack Carroll, said the plan is to use “every dollar donated” for ads, digital organizing and communication.

But with TV largely saturated, there are limited avenues for him to productively spend such a massive sum of money with just three weeks left before the election.

“I don’t think Jaime Harrison can spend $57 million in the next couple weeks. But that’s not his fault,” said Jefrey Pollock, a Democratic pollster who is working on eight Senate races. Pollock said much of the money will go to advertising, get out the vote and other expenses, but "at some point they’ll start sending that money to other places or spending down ballot.”

The same could apply for McGrath, who is fighting an uphill battle against Senate Majority Leader Mitch McConnell in Kentucky. She has yet to release her most recent fundraising figures, which must be made public by Thursday, but has pulled in $47 million this cycle as of July 1.

Democrats dismiss such concerns and say there's no such thing as too much money. Plus, they argue, the wild success some have enjoyed has warped perceptions about what is needed.

“All of these challengers are doing well, and it’s hard to find a spot where Democrats are struggling at this point,” said Stewart Boss, a spokesperson for the Democratic Senatorial Campaign Committee.

The money to Democrats has heightened a sense of dread among Republicans. They've watched as developments this year — including a global pandemic, a faltering economy and the president's diagnosis of COVID-19 — have expanded the map of competitive races.

Money has washed up in predictable races where Democrats are mostly outspending Republicans, including Iowa, Michigan, Maine, North Carolina, Georgia and Arizona.

In Montana, the estimated $131 million that will be spent on advertising in the Senate race between Republican Sen. Steve Daines and outgoing Democratic Gov. Steve Bullock translates to about $122 for every state resident.

But money is also trickling down to once unthinkable states, including Kansas, Alaska and Mississippi, forcing Republican outside groups to spend money playing defense, according to data from the ad tracking firm Kantar/CMAG.

Senate Leadership Fund, a super PAC with ties to McConnell, is projected to spend about $14 million in Kansas to boost Republican Rep. Roger Marshall, who is being outspent nearly 4-to-1 by Republican-turned-Democrat Barbara Bollier. In Alaska, the group has gone up with $1 million in advertising boosting first-term Republican Sen. Dan Sullivan, who was being outspent by his independent challenger Al Gross.

In Texas, though, Hegar is slated to be outspent by Cornyn, barring another infusion of advertising dollars.

“Everything is really close. And that’s not great news for Republicans,” said Holmes, the McConnell adviser. “There’s just an awful lot of combinations the Democrats could have to take the majority."

For Democrats, the torrent of resources is allowing them to get creative.

Harrison is not only inundating the TV with advertising, but in conjunction with the state party, he's also run digital ads calling a third-party candidate on the ballot “too conservative” for South Carolina, even though Constitution Party candidate Bill Bledsoe has endorsed Graham and is no longer campaigning. The ploy is aimed at depriving Graham of some votes from conservatives.

In Maine, where vulnerable Republican moderate Sen. Susan Collins is being challenged by Democrat Sara Gideon, the state Democratic Party has paid for “Trump Collins 2020” yard signs in their push to link Collins to the president. The race has similarly shattered state spending records, with an influx of cash from both sides that's expected to reach at least $106 million.

Then there's McGrath. Flush with cash, her campaign has paid for slickly produced “Swamp Turtle" cartoon ads that portray McConnell as a denizen of the entrenched Washington interests that Trump ran against in 2016.

“Amy McGrath is just lighting money on fire," Matt Jones, a Kentucky radio host who briefly considered jumping in the race as a Democrat, tweeted in response.