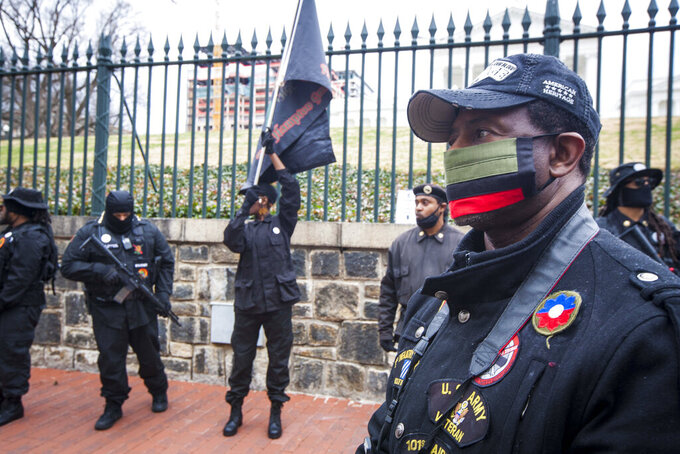 Several gun-rights advocates came to Richmond on Monday, some of them heavily armed. The Martin Luther King Jr. holiday is typically a chance for citizens to use a day off work to meet with their legislators in what’s informally known as “Lobby Day.”

Gun-rights activists typically make a large, organized appearance each year. Last year, tens of thousands of gun-rights activists from around the country flooded the Capitol and surrounding area in protest of a new Democratic majority's push to enact new gun restrictions.

This year they organized a series of caravans through the city decked out in pro-gun messages amid the coronavirus pandemic. Gun laws have gotten much less attention this year and Democratic leaders have not prioritized gun legislation.

In comments to gun-control advocates Monday, Democratic Gov. Ralph Northam urged them to stay “vigilant” and to continue working to elect lawmakers who support what the governor said were common-sense gun restrictions.

“We can't take any chances of going back,” Northam said.

Because of the coronavirus pandemic, the state Senate is convening for this year’s legislative session at a science museum event center that allows for greater social distancing. House lawmakers are meeting virtually.

A small caravan of about 10 vehicles drove past the museum shortly before the Senate convened on Monday. It was not visible to lawmakers inside the event center. Lawmakers held a brief floor session with little mention of guns.

Republican Sen. Amanda Chase, a far-right candidate for governor, urged her colleagues in a floor speech to “advocate for the Constitution, whether we agree with each other or not.”

The state Capitol and grounds around it are closed to the public through at least Thursday. Turnout was light near the Capitol on Monday, with some people carrying long guns.

Among the attendees was Mike Dunn, a leader in the boogaloo movement, a slang term adopted by the pro-gun extremist movement that is a reference to a sequel — in their case, a second U.S. civil war. The movement has been linked to a string of domestic terrorism plots and has been promoted by white supremacists, but many supporters insist they’re not truly advocating for violence. The term “boogaloo” derives from the name of a 1980s-era movie sequel.

The FBI issued a warning about the potential for violence at state capitols in the aftermath of the deadly insurrection at the U.S. Capitol. But there were no reports of major incidents over the weekend and only small groups of right-wing protesters — some of them armed — gathered outside heavily fortified statehouses around the country on Sunday.