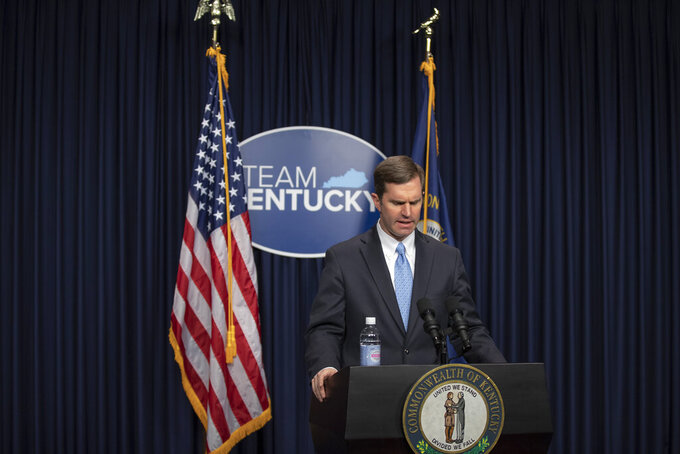 FRANKFORT, Ky. (AP) — The Kentucky Senate advanced a bill Friday that would allow the state to waive the overpayment of some unemployment claims, but bickered over the long delays many people have endured in seeking jobless assistance amid the COVID-19 pandemic.

Lawmakers recounted heartbreaking calls from constituents desperate for help after losing their jobs amid the COVID-19 pandemic that battered the economy.

Republicans condemned the massive claims backlog and the long waits people have faced in trying to talk to officials in the unemployment insurance system, laying blame at the feet of Democratic Gov. Andy Beshear. GOP lawmakers repeatedly said: “Answer the phone.” They asked what his administration was doing to resolve the problems.

Democrats countered that the system — overwhelmed by record numbers of claims — suffered from staffing cuts before Beshear took office, three months before the pandemic hit.

“We can yell and scream about answering the phone. Let’s just be honest about why there’s no one on the other end,” said Sen. Morgan McGarvey, the chamber's top-ranking Democrat.

In his budget plan submitted in early January, Beshear proposed allocating $47.5 million to fix what he called “a legacy of underfunding” the unemployment insurance system. Republican lawmakers are still working on their version of the state budget for the next fiscal year.

Senators banded together Friday to pass the measure aimed at allowing the waiver to resolve one unintended issue in the unemployment crisis. Under the proposal, the waiver would apply to some people who left their jobs early in the pandemic due to concerns about exposure to COVID-19. At the time, the state signaled they’d be eligible for unemployment assistance, but recipients later were informed the money had to be given back.

“They don’t have that money," Republican Sen. Michael Nemes said Friday. "They spent it. They needed it. They paid it on their rent, on their mortgage, on their food.”

The legislation, which now goes to the House, would allow the state Labor Cabinet to waive overpayments when the unemployment office was at fault. Recipients would be expected to request the waiver.

“We will make it possible for this administration to start to fix what they’ve broken,” said Republican Sen. David Givens, the bill's lead sponsor.

Beshear’s administration has pointed to the U.S. Labor Department for the mix-up.

The state Labor Cabinet praised the Senate's passage of the legislation.

“We are satisfied this bill will allow us an equitable solution and give claimants that have received an overpayment notice ample time to file an appeal," the cabinet said in a statement.

Discussion of the bill was overshadowed by the prolonged debate over larger problems in the state's beleaguered unemployment insurance system.

Tens of thousands of Kentuckians found themselves in limbo for months as they waited for their jobless claims to be processed. Beshear’s administration eventually hired an outside company to help work through the claims backlog.

Republican senators said Friday they want to help resolve the problems. They asked how many unemployment claims are still pending and the extent of fraudulent requests for assistance.

GOP Sen. Whitney Westerfield said “it's just a black hole” once constituents are urged to contact state labor officials about their pending claims. He said it's part of a lack of communication from Beshear's administration in resolving the system's problems.

“I’d be OK and I’d be less frustrated with a response that says, ‘Senator, we don’t know,’" Westerfield said. “At least it would be an acknowledgement of the problem.”

Pointedly, he added: “It would be a response instead of just dead air, and that’s what we’re getting.”

Democratic Sen. Robin Webb said lawmakers are "complicit in this failure” with past decisions to underfund the unemployment insurance system.

Beshear has repeatedly pointed to staffing cuts in the system, the closing of many local unemployment offices and an antiquated computer system. Cutbacks occurred during the tenure of Beshear's predecessor, Republican Matt Bevin, when unemployment rates were low.

The legislation is Senate Bill 7.