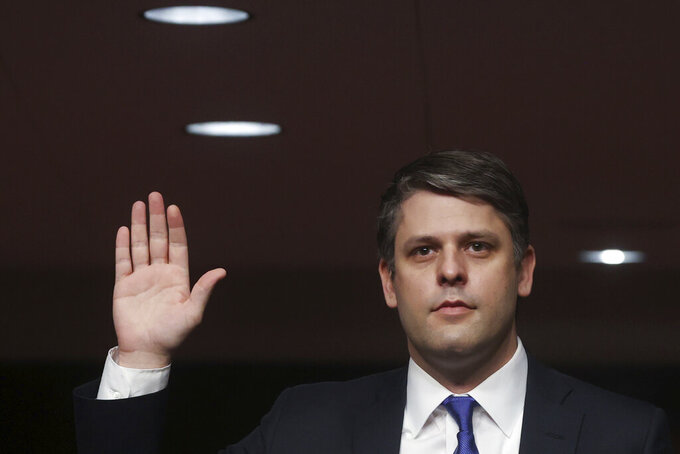 Judge Justin Walker is sworn in prior to testifying before a Senate Judiciary Committee hearing on Walker's nomination to be a U.S. circuit judge for the District of Columbia Circuit on Capitol Hill in Washington, Wednesday, May 6, 2020. (Jonathan Ernst/Pool Photo via AP)

WASHINGTON (AP) — The Senate Judiciary Committee has advanced the nomination of a 38-year-old judge and ally of Senate Majority Leader Mitch McConnell to serve on a federal appeals court, despite Democrats’ objections that he’s inexperienced and biased against the Obama health care law.

Walker, a protege of both McConnell and Supreme Court Justice Brett Kavanaugh, told senators last month that he will have an open mind on the Affordable Care Act, adding that he was writing as an academic and commentator when he criticized as “indefensible” a Supreme Court ruling upholding the law.

Walker, who was confirmed as a federal judge last fall, declined a request by Senate Democrats to recuse himself on matters related to the health care law if he’s confirmed to the U.S. Court of Appeals for the District of Columbia Circuit. The court is widely considered the second-most powerful in the nation and frequently serves as a launching pad for a seat on the Supreme Court. Four current justices, including Kavanaugh, served on the D.C. circuit.

Sen. Dick Durbin of Illinois, the No. 2 Senate Democrat, called Walker's nomination a travesty and an affront to other, more qualified conservative judges.

Walker is not qualified for the job "and we all know it,'' Durbin said. The nomination is moving forward not only as “a personal favor” to McConnell, but also as "a direct attack on the Affordable Care Act in the midst of a public health crisis in America,'' Durbin said.

Durbin and other Democrats say Walker’s confirmation could threaten the health of millions of Americans protected by the law known as Obamacare, which the Trump administration is challenging in court.

Democrats also complained that the committee was advancing Walker’s nomination during the coronavirus crisis and nationwide upheaval over the police killing of George Floyd in Minneapolis. The seat Walker would take will not be vacant until September.

“This committee is rushing to confirm a nominee for a vacancy that does not yet exist,'' said Sen. Kamala Harris, D-Calif.

McConnell, a longtime family friend who employed Walker as an intern in his Senate office, said that in his short time as a federal judge in the Western District of Kentucky, Walker has "wasted no time in expanding his strong reputation for intellectual brilliance, legal acumen and total fairness and impartiality.''

McConnell and other Republicans praised a ruling by Walker defending a Kentucky church's right to hold Easter services, despite a stay-at-home order in response to the coronavirus.

At his hearing last month, Walker defended comments he made during a March speech in which he lavished praise on Kavanaugh, who was confirmed to the Supreme Court in 2018 after a bitter partisan fight over allegations of sexual assault and other claims. Walker clerked for Kavanaugh when he was on the D.C. appeals court.

“In Kavanaugh’s America, we will not surrender while you wage war on our work, or our cause, or our hope, or our dream,'' Walker said in the speech, which was attended by McConnell, Kavanaugh and other conservative luminaries.

Walker told the Judiciary Committee said he was describing the kind of judge Kavanaugh is, adding that he will defend Kavanaugh and former Supreme Court Justice Anthony Kennedy — another mentor — “until the cows come home.″

Walker drew a “Not Qualified” rating from the American Bar Association when Trump nominated him last year to be a federal judge in Kentucky. The group changed its rating just before the May 6 hearing, calling Walker "Well Qualified” to serve on the appeals court.

The group cited Walker’s experience as a clerk to Kavanaugh and Kennedy and his six months as a federal trial judge. Walker, a graduate of Duke University and Harvard Law School, was confirmed as a judge in October. He previously was a lawyer in Louisville and Washington.

More than 200 groups, including the Leadership Conference on Civil and Human Rights, the NAACP and the National Council on Jewish Women, oppose Walker’s nomination, citing his record against expanding access to health care and against safeguards for the environment, consumers and the workplace.