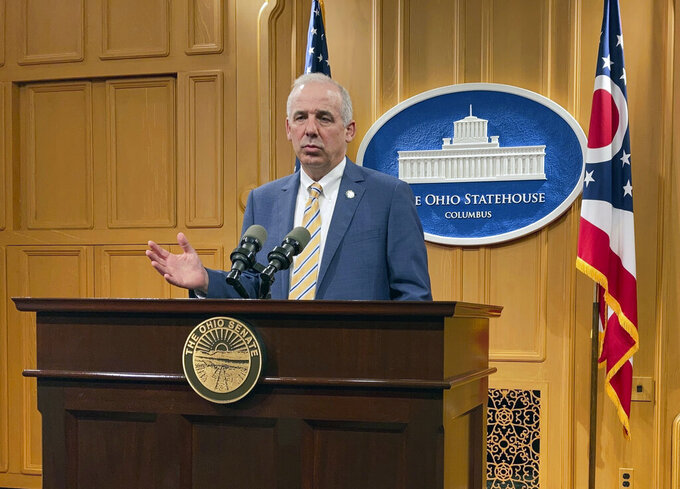 Ohio Senate President Matt Huffman, a Lima Republican, discusses the Senate passage of Ohio's two-year, $75 billion state budget, on Wednesday, June 9, 2021, in Columbus, Ohio. Differences in how to pay for K-12 education are expected to dominate the next stage of deliberations, with the House and Senate taking different approaches to a long-term school funding solution. The two chambers must reconcile two versions of the budget by month's end. (AP Photo/Andrew Welsh-Huggins)

COLUMBUS, Ohio (AP) — Ohioans receiving food stamps would have to undergo a new “asset test” that measures total worth, including the value of cars owned by anyone in a household, under a provision in the Senate's version of the state's upcoming two-year budget.

The goal of the test is to be sure needy recipients of food stamps, or SNAP benefits as they're now known, get what they deserve, said Senate President Matt Huffman, a Republican from Lima.

“There are a lot of folks who can afford to pay for a variety of things who are still receiving these benefits,” Huffman said earlier this month.

The measure incorporates elements of stand-alone legislation introduced earlier this year in the GOP-controlled Senate. Dozens of people representing food banks, legal aid groups and health care advocacy groups have testified against it. The legislation is pending in the Senate Government Oversight and Reform Committee.

Opponents of that bill and its reappearance in the budget say it comes at the worst possible time, as emergency federal benefits enacted during the coronavirus pandemic expire. Those include maximum allotments for food stamp recipients, the $300 weekly unemployment payment, and a moratorium on evictions.

“It will force low-income Ohioans to choose between having food and owning a car to get to work, or saving money to prepare for an emergency,” she said.

Under current law, income is the only test for receiving food stamps. Ohioans making 130% of the poverty level, or about $2,350 a month for a family of three, are eligible.

The Senate measure would still allow ownership of vehicles used for work, to transport a physically disabled family member, or to carry heating fuel or water for home use, under federal guidelines, said Senate GOP spokesperson John Fortney.

The asset test was not included in the House version of the state's two-year, $75 billion budget, which House lawmakers approved in April. A bipartisan conference committee ironing out differences between the Senate and House version of the budget was scheduled to begin work Tuesday afternoon.

The story has been updated to correct that Kelsey Bergfeld is director of Columbus-based Advocates for Ohio's Future.