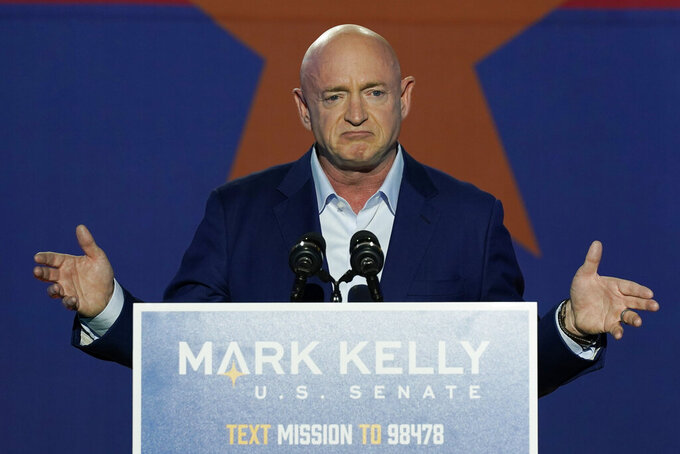 PHOENIX (AP) — Democrat Mark Kelly pledged Friday to stick with the campaign theme of bipartisanship that won him a U.S. Senate seat in Arizona's election, saying it was more than a rallying point to get voters in the traditionally Republican state to back him.

Instead, the newly elected retired astronaut said it's what he and his wife, former Rep. Gabby Giffords, have always believed, and he wants Arizonans to know he plans to turn the campaign theme into action.

“The polarization and the politization that we’ve seen on issues, it just makes it where our country has a hard time, our government doesn’t even function well anymore,” Kelly said in an interview with The Associated Press. “And I think the only way to fix that is for individuals, both Democrats and Republicans, to be committed to working together with the other side.”

Kelly will get an early look at how that might work in a little over two weeks. He will be sworn in as soon as the election results are certified because current Sen. Martha McSally was appointed to the seat once held by the late John McCain until last week's special election could be held.

Kelly has already put together a bipartisan transition team to advise him. McSally called him Friday to concede and offer her help in the transition.

“I spoke to her today and had a great conversation with her,” Kelly said. “And she recognized that I have an accelerated timeline here to put an office together before I get sworn in in December. She pointed that out and wants to be helpful.”

First on the agenda for Kelly will be addressing the coronavirus pandemic and its effects on people and the economy, He noted that the U.S. has seen 1 million new COVID-19 infections in the past 10 days, a massive increase that shows the need for immediate government action. He said that while president-elect Joe Biden is putting together a team to handle the pandemic, when he is sworn in in January, there is a crisis now.

“In a crisis you’ve got to handle those things first, and that means addressing COVID 19 and at the same time trying to support those folks out there that have really struggled, lost their jobs and trying to get by here in the state of Arizona on very little in unemployment benefits,” he said. “And then try to put the economy back together after this.”

Kelly positioned himself as a pragmatic centrist with no patience for Washington partisanship during the campaign. When the coronavirus pandemic struck, he retreated to mostly online outreach, minimizing face-to-face campaigning while blasting McSally and President Donald Trump for allowing the pandemic to get out of control.

McSally, a retired Air Force pilot and former congresswoman who took office in January 2019 after Gov. Doug Ducey appointed her, conceded in a Friday statement and said it was an honor to serve and thanked Ducey.

“I will always be inspired by the strength, resilience, innovation, and compassion that I witnessed from Arizonans as I traveled throughout our great state,” she said. “I will never forget what I learned from all of you. ”

Kelly said his wife, who was left with disabilities after being shot in the head in a 2011 assassination attempt in Tucson, may travel with him to Washington.

“Gabby’s pretty tough – she’s one of the toughest people I know and she is motivated and a hard-working individual,” he said. 'When she served in Congress she went back and forth a lot, and I suspect she’s going to want to spend a lot of time with me in D.C. now."

That shooting led Kelly to push for tighter firearms laws, although he's a gun owner and strong backer of the 2nd Amendment. He said he will seek laws that protect communities from gun violence.

“And there’s a lot that can be done that most Arizonans support,” he said. “It’s a political issue, but it’s something that's very personal to me.”

Kelly said the tight party split where Republicans have a slim Senate majority provides an opportunity for the bipartisanship he ran on.

“It’s going to be important to reach across the aisle to those Republicans who want to get things done,” Kelly said. “I think it’s going to be up to both parties to address some of these major issues that we’re facing.”

Arizona will send two Democrats to the Senate for the first time in nearly 70 years when Kelly joins Kyrsten Sinema in Washington. Kelly will finish the last two years of McCain’s term and then face reelection in 2022.