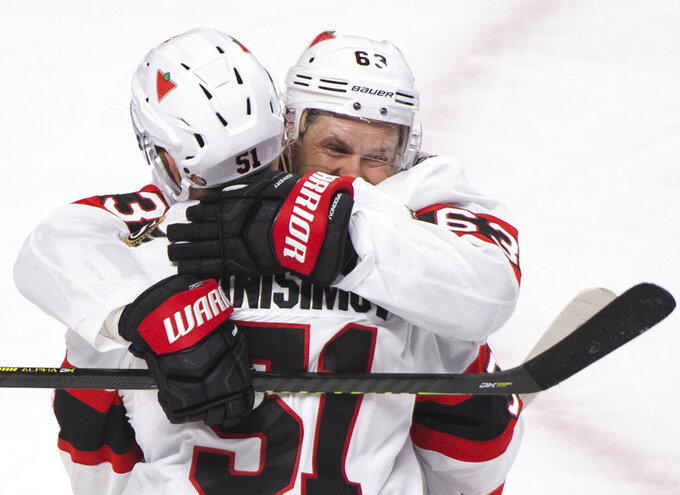 Ottawa Senators' Evgenii Dadonov (63) celebrates with Artem Anisimov after scoring against the Montreal Canadiens during the second period of an NHL hockey game in Montreal, Saturday, April 3, 2021. (Graham Hughes/The Canadian Press via AP)

Montreal entered the game riding a three-game win streak sandwiched around a nine-day hiatus due to COVID-19 protocols. Ottawa (13-21-4) had lost two straight, including a 4-1 decision to the Canadiens on Thursday.

Josh Anderson had two goals and Tyler Toffoli also scored for Montreal. Nick Suzuki and Shea Weber each contributed a pair of assists. Toffoli, returning after missing the last three games due to injury, raised his season goal total to 19.

Forsberg made his second start of the season — and the 50th of his NHL career.

“He gave us every chance. … The kid’s really focused and you’ve got to be happy for him. He battled for us,” Ottawa coach D.J. Smith said of Forsberg.

“Tonight we were just not sharp. We didn’t play a solid game. … On the other side, they played better,” he said.

Ottawa was handed an early opportunity when Brendan Gallagher was assessed a double high-sticking minor after just 28 seconds. Tkachuk took advantage 14 seconds later, stuffing the puck in after Batherson found him at the edge on the crease for his 12th of the season.

Toffoli countered on the power play at 5:31 with a one-timer from the faceoff circle.

Forsberg took a blast from Weber off the shoulder midway through the first.

Brown scored a short-handed goal for the Senators at 12:07, poking in a rebound off a Nick Paul shot.

After Price made back-to-back saves to deny the Senators, the Canadiens tied it at 2-2 at 6:58 of the second period with Anderson beating Forsberg on the glove side with a high shot. Ottawa answered 51 seconds later with Dadonov tipping home a Thomas Chabot shot through traffic from the point.

Dadonov made it 4-2 at 16:04 after both Montreal defensemen headed behind the net to coral Anisimov, only to see him send the puck to his fellow Russian left unmarked in the slot. It was Dadonov’s 11th of the season.

Anderson scored his 13th with 72 seconds remaining in the second period, beating Forsberg to cut the lead to 4-3.

Formenton restored Ottawa’s two-goal lead at 2:55 of the third, beating Price after Jeff Petry lost the puck near the Montreal goal.

Senators: At Winnipeg Jets on Monday.