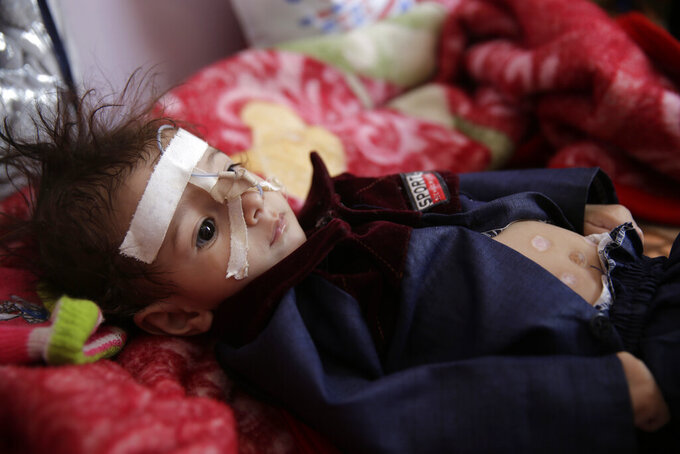 FILE -- In this Nov. 23, 2019 file photo, a malnourished boy lies in a bed waiting to receive treatment at a feeding center at Al-Sabeen hospital in Sanaa, Yemen. The U.N. children’s agency has appealed for an additional $92.4 million to help fight the coronavirus in the Middle East and North Africa. The conflict-battered region had 25 million children in need of aid before the pandemic, the highest number anywhere. The economic downturn linked to the outbreak is expected to push an additional 4 million children into poverty. Ted Chaiban, the head of UNICEF in the region, says Yemen is a top concern. (AP Photo/Hani Mohammed, File)

The slain rebels' special forces commander, Mohamed Abdel Karim al-Hamran, enjoyed close ties to the top Houthi leader, Abdul Malek al-Houthi. He was the most high-ranking commander killed this year, part of an elite brigade trained by militants from the Lebanese group Hezbollah.

Al-Hamran died in clashes between the central provinces of Marib and Bayda, which have been the epicenter of recent fighting, said Yemeni security officials, speaking on condition of anonymity under regulations.

Warplanes with the Saudi-led coalition supporting the Yemeni government forces bombed Houthi targets across the provinces, setting five military convoys ablaze. Dozens were killed and wounded on both sides, the officials added. At least 16 fighters were killed in Bayda, mostly among the Houthis.

The rebel military spokesman, Yehia Sarea, accused their adversaries of launching 11 ground assaults across the front lines in Marib and Bayda and unleashing 110 airstrikes, including on the rebel-held capital of Sanaa.

Yemen’s conflict, now grinding into its sixth year, shows no signs of abating despite the grave threat posed by the coronavirus pandemic and the unilateral cease-fire announced by Saudi Arabia last month.

Separately, a recent declaration of self-rule by Yemen's southern separatists, who had been nominal allies with government forces in the fight against the Houthis, has thrown fuel on the increasingly divisive conflict, which has killed over 100,000 people and generated the world’s worst humanitarian crisis.

In the southern Abyan province, an explosion hit a military checkpoint late Thursday, killing three soldiers and wounding four others. Security officials said they were investigating the cause of the blast, which likely stemmed either from an IED or car bomb attack. The governorate is a flashpoint for clashes between Saudi-backed government forces and the separatist group, supported by the United Arab Emirates.

Meanwhile, aid workers warn of devastation as Yemen’s coronavirus case count rises. Although testing is extremely limited, the country's internationally recognized government has detected 25 infections, including five deaths, across multiple provinces — a sign that community transmission has taken off. The Houthis have reported just one fatality caused by COVID-19 in their territories, prompting speculation about the scale of the outbreak.

The Trump administration this week announced $225 million in emergency aid to the World Food Program, which was forced to scale back its work in northern Yemen after donors cut funding because of long-standing Houthi obstruction. It said the boost would allow the WFP to reach some 8 million hungry people throughout the country. More than 22 million people are in need of humanitarian aid in Yemen, according to the U.N., and hundreds of thousands of children suffer from malnutrition.