Sephora to take over cosmetics in Kohl's stores 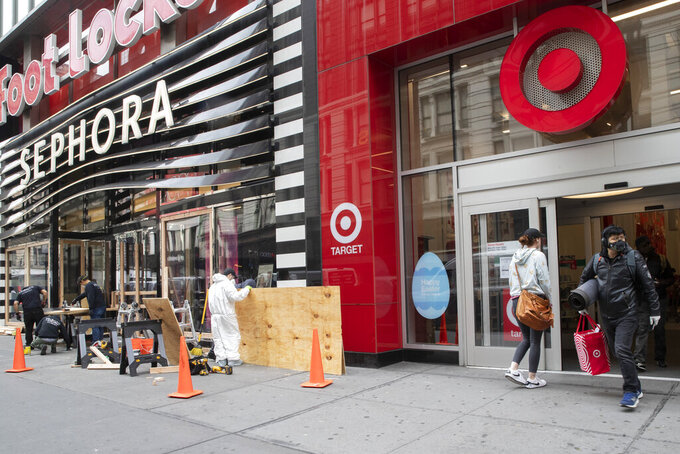 FILE - In this Friday, March 20, 2020 file photo, a shopper leaves the Target Store on 34th St. with supplies as carpenter board up the Sephora story in New York. Target Corp. said Friday it will give a $2 an hour wage increase to its 300,000-plus workers who have been scrambling to help customers. The pay bump will be effective at least through May 2. (AP Photo/Mary Altaffer, File)

NEW YORK (AP) — Sephora will be replacing all cosmetics areas at Kohl's with 2,500 square foot shops, starting with 200 locations in the fall of year.

It will expand to at least 850 stores by 2023, the companies announced Tuesday.

It is the second major partnership announced this month that pairs a department store with a national cosmetics retailer, with both navigating an unrelenting pandemic.

Earlier this month, Target said it would be opening Ulta Beauty shops in more than 100 stores next year.

Retailers have recognized that Americans are consolidating trips away from the house to reduce potential exposure to the coronavirus.

Wall Street liked the idea, sending shares of Kohl's up 15% Tuesday to levels not seen since the coronavirus began to spread in the U.S. early this year.

The Sephora's online beauty experience will launch on Kohls.com in the fall of 2021. The deal upends Sephora's 14-year exclusive relationship with J.C. Penney, which filed for Chapter 11 bankruptcy protection in May. It will emerge from bankruptcy after closing about a third of its stores.

The partnership with J.C. Penney is set to wind down in early 2023, Jean-Andre Rougeot, CEO at Sephora USA, told The Associated Press on Tuesday. J.C. Penney said its developing its own cosmetics area to replace Sephora when that agreement ends.

The 10-year partnership between Sephora, a division of LVMH Moët Hennessy Louis Vuitton SE, and Kohl's stands to benefit both retailers as the coronavirus pandemic upends shopping habits. Kohl's, based in Menomonee Falls, Wisconsin, has struggled during the pandemic and is looking to draw new and younger customers. The partnership will help Kohl's reach its goal of tripling cosmetics and beauty sales, said CEO Michelle Gass.

“Beauty is a very big market," Gass said, noting that customers have already voiced their desire for more in that category.

Rougeot said Sephora was attracted to Kohl's because of its network of 1,100 stores, mostly outside of malls. Malls have suffered from falling traffic for years, and the pandemic has led to further deterioration.

Sephora currently has 500 of its 2,600 stores worldwide in the Americas.

The Sephora shops, which will feature about 100 brands, will be at the front of Kohl's stores. The shops at Kohl's will be staffed people trained by Sephora. Gass said that both companies will share in the operating profit of the shops.