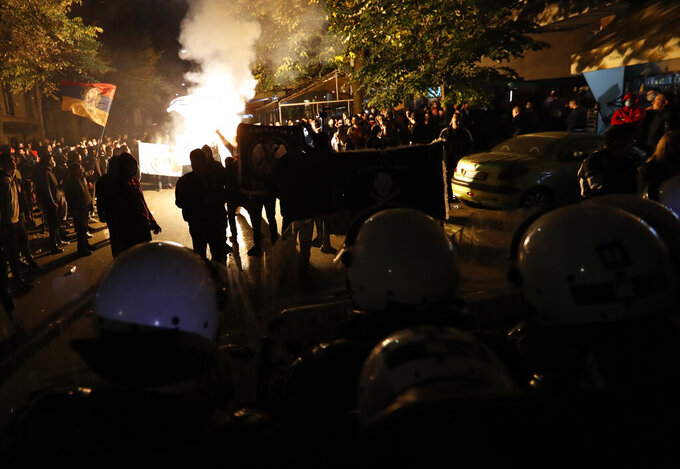 Serbian police officers guard the street during a protest against a festival ''Mirdita-Dobar Dan'' organized by liberal groups from Serbia and Kosovo, in Belgrade, Serbia, Thursday, Oct. 22, 2020. Serbian police prevented dozens of right-wing extremists from disrupting a youth cultural event with Kosovo after similar groups in the past weeks broke into a cartoon exhibition and threatened artists in a theatre play about the 1995 killings in Srebrenica. (AP Photo/Darko Vojinovic)

Riot police deployed around the venue in central Belgrade hosting the Miredita Dobar Dan festival that is organized annually by liberal youth groups from Serbia and Kosovo. One of the extremists managed to break through the cordons and reach the scene before he was taken away.

Serbia does not recognize the independence of Kosovo, a former province that declared independence in 2008 following a war in 1998-99, which ended after NATO intervened to stop Belgrade's onslaught against ethnic Albanian separatists.

International efforts aimed at negotiating normalization of relations between Serbia and Kosovo recently have picked up pace with both the United States and the European Union stepping in to try and broker a solution to the decades-long source of instability in the volatile Balkan region.

Serbian nationalist and right-wing groups view Kosovo as part of Serbia and often seek to disrupt liberal events dealing with the country's role in the breakup of the former Yugoslavia in the 1990s and the war crimes committed by Serb forces during the conflict.

Right-wing protesters on Thursday chanted slogans, sang nationalist songs and waved Serbian flags as they tried to reach the building in central Belgrade where the opening was taking place. Some lit flares and shouted ethnic slurs against Kosovo Albanians.

The festival features culture promotion from Serbia and Kosovo, debates, films or plays. The play that opened the festival on Thursday was held in respect of measures against the new coronavirus.

“We want to be those who will send a message of peace into the world, by sitting at the same table with the youth from Kosovo and by exchanging thoughts and culture with them," said Fiona Jelici, from the Youth Initiative for Human Rights that is behind the event.

In previous weeks, assailants broke into an alternative cartoonist exhibition and smashed it, while the director and actors in the play about the massacre of over 8,000 Bosniak Muslims in Srebrenica by Bosnian Serb troops have received dozens of threats. A right-wing leader recently broke into an exhibition dealing with the Serb bombing of the Bosnian town of Tuzla during the 1992-95 war.

While Serbian populist authorities under autocratic leader Aleksandar Vucic formally are seeking EU entry and have pledged to boost reconciliation in the Balkans, critics say the government mostly has turned a blind eye to the mushrooming right-wing organizations in the country.

More than 100,000 people were killed in the wars that followed the breakup of the former Yugoslav federation in the early 1990s'. Serb nationalists seek to portray the Serbs as the only victims of the conflict, rejecting their role in atrocities committed against other ethnic groups in Croatia, Bosnia or Kosovo.