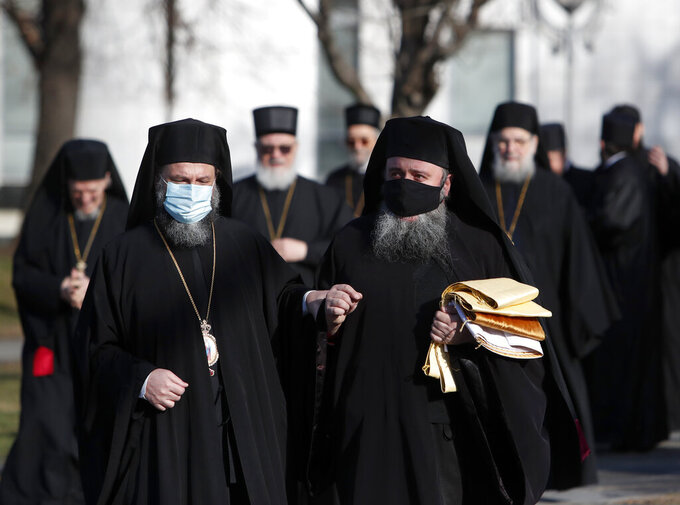 BELGRADE, Serbia (AP) — Serbian Orthodox Church bishops elected an ally of the country’s populist president Thursday as the new leader who is succeeding the church patriarch who died after contracting the coronavirus.

Bells tolled on the sprawling Saint Sava Temple in Belgrade where senior Serbian bishops met to announce Metropolitan Porfirije as the new patriarch of the highly influential church.

Porfirije, 59, was always considered a strong candidate for the post, both because of his ranking position within the Serbian Orthodox Church and his apparent closeness to Serbian President Aleksandar Vucic.

He replaces Patriarch Irinej, who died in November from COVID-19 complications.

Irinej was also close to Vucic, and there were fears within the church and the Serbian leadership that a more liberal religious leader could sway the church away from its traditionally conservative path.

The church strongly opposes the secession of former Serbian province Kosovo, which declared independence in 2008. It played a key role in rallying its believers in Montenegro to vote for the pro-Serbian parties that narrowly defeated a pro-Western government in a parliamentary election last summer.

Having an ally at the church’s helm would be important for Vucic if he tried to negotiate with Kosovo’s majority ethnic Albanians on establishing future ties between Serbia and Kosovo. Ethnic Albanian separatists and Serbian forces fought a brutal 1998-1999 war in Kosovo.

The issue of Kosovo's statehood continues to strain ties between the two countries. Support from the Serbian church, whose ancient seat is located in Kosovo, is considered key for any deal.

Vucic congratulated the new patriarch on the election, saying he joins other church heads who “in difficult time knew how to preserve faith, honor and dignity of our nation and respond to the challenges they faced.”

“Now this hard but honorable task has befallen you,” Vucic said, promising that “our Serbia” would work with the patriarch for the good of the people while following the path set by the past church patriarchs.

Within the church, Porfirije coordinated cooperation with the Serbian military. Before he was elected to the leadership role, he led the Serbian Orthodox Church in neighboring Croatia and in Slovenia.