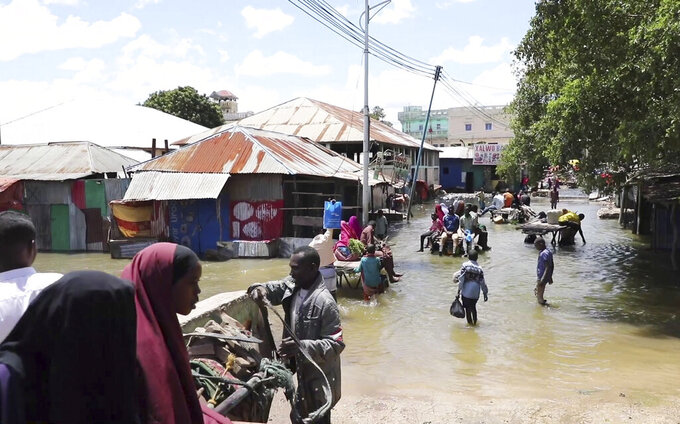 In this image made from video, residents move through floodwaters on foot and using donkey carts in Afgoye, Somalia Sunday, Aug. 9, 2020. Severe flooding continues to displace thousands of people in Somalia and the government in recent days has issued new warnings to communities living along the Jubba and Shabelle rivers. (AP Photo)

The government in recent days issued new warnings to communities living along the Jubba and Shabelle rivers. It said rains in the highlands of neighboring Ethiopia could lead to flash floods in towns such as Jowhar and Beledweyne.

Residents have said several people have been swept away. The United Nations has said at least four displaced people have died. More than 100,000 people have had to flee their homes since late June.

President Mohamed Abdullahi Mohamed has appealed for emergency relief for Afgoye town outside the capital, Mogadishu. Afgoye has seen some of the worst flooding, with parts of town swept away and thousands of families left without power.

Residents have been erecting makeshift barriers against the waters. Some waded through waist-deep water or traveled around town on rafts.

“It looks like each family has to erect its own mountain of sandbags now,” said Mohamed Abukar, a farmer. He called the work exhausting.

Others in the town crowded into shelters, with no chance of staying at a safe distance to prevent the potential spread of the coronavirus.

“You can’t help or otherwise think about a disease when you get as desperate as we are and just want to survive,” said Owralo Ahmed, a mother of eight whose house was swept away.

In Mogadishu, people took shelter at a camp for displaced people.

“We could no longer stay in our home because of the snakes and crocodiles so we have come here,” Batulo Aden said.