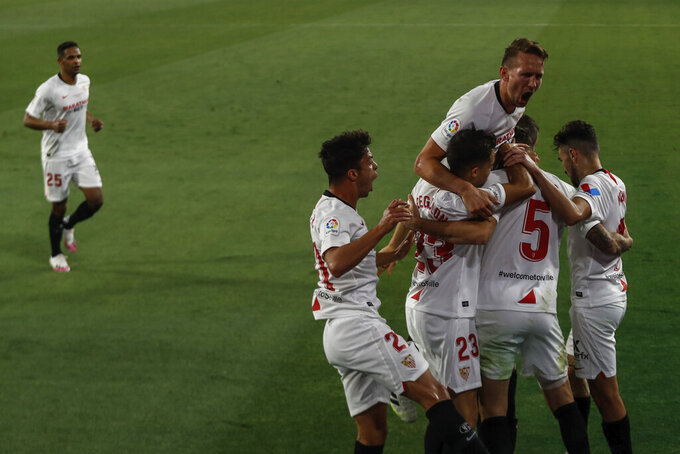 Sevilla's Lucas Ocampos, number 5, is congratulated after scoring against Betis during their Spanish La Liga soccer match in Seville, Spain, Thursday, June 11, 2020. With virtual crowds, daily matches and lots of testing for the coronavirus, soccer is coming back to Spain. The Spanish league resumes this week more than three months after it was suspended because of the pandemic, becoming the second top league to restart in Europe. The Bundesliga was first. The Premier League and the Italian league should be next in the coming weeks. (AP Photo)

MADRID (AP) — With a video game look for fans at home, the Spanish league resumed Thursday with Sevilla defeating Real Betis 2-0 in the Seville derby.

The highly popular match between the southern rivals marked the league’s return three months after it was halted by the coronavirus pandemic. La Liga became the second top European league to resume, after the Bundesliga in Germany. The Premier League and the Italian league are set to follow next week.

Soccer had officially restarted in Spain on Wednesday with the second half of a second-division game that had been halted in December.

There were strict health guidelines in place as the topflight resumed, with ball boys being asked to disinfect the ball every time it left the field and players being told to maintain a “safe distance” when talking to the referee.

Players were also asked to “minimize physical contact” during goal celebrations, though there were lots of hugging and plenty of contact between Sevilla players after forward Lucas Ocampos opened the scoring by converting a penalty in the 56th minute. The same happened after midfielder Fernando added to the lead with a header in the 62nd.

After the match, players also hugged each other and celebrated in front of the stands, as if fans were present.

“We dedicate the victory to them,” Ocampos said. “They couldn't be here, but we felt their presence. We have to adapt to this moment."

Fans were not allowed in the 43,000-capacity Ramón Sánchez-Pizjuán Stadium but virtual crowds and prerecorded chants from fans, similar to those in video games, were added to the television broadcast sent to the rest of the world. Viewers in Spain were the only ones with the option of watching the original feed from the empty stadium.

There were some glitches with the system, though, as the superimposed fans sometimes briefly disappeared from the stands and interfered with the main image.

The virtual crowd noise at first was lower than actual chants from fans, but the effect seemed slightly louder in the second half and worked well during the goals, although there was a longer delay in the sound of the crowd celebration for the second goal compared to the first.

The images of fans — which did not have the same high-definition look as the ones in modern video games — were superimposed on the lower sections of the main stands and behind the goals, and appeared only when the main camera angles were active.

The league says the virtual crowds are only intended to improve the viewing experience while matches are played in empty stadiums.

The league has not ruled out having real fans back in the stands by the end of the season if Spain continues to gradually lift restrictions prompted by the pandemic.

A round of applause was played in the 20th minute as part of the “applause to infinity” tribute that the league will promote in every game to honor those fighting the pandemic in Spain.

The streets around the Sánchez-Pizjuán were mostly empty as barriers were placed around the stadium to keep fans from gathering. More than 600 police officers and private security agents were summoned to work during the match.

Before the game, the video screens at the Sánchez-Pizjúan played videos of Sevilla fans singing the club's anthem, a longstanding tradition when the supporters are in the stadium. The loudspeakers played team songs after the match as well.

A moment of silence was observed before kickoff as the players stood around the midfield circle.

There were no handshakes and team photos before the match but players lined up at midfield without maintaining a safe distance. Everyone except the coaches had to wear gloves and masks on the benches.

Only a few media members were allowed in the stadium.

The victory kept Sevilla in third place with 50 points, six fewer than second-place Real Madrid, which returns to action on Sunday against Eibar. Leader Barcelona, two points ahead of Madrid, resumes at Mallorca on Saturday. Betis stayed in 12th place with 33 points.