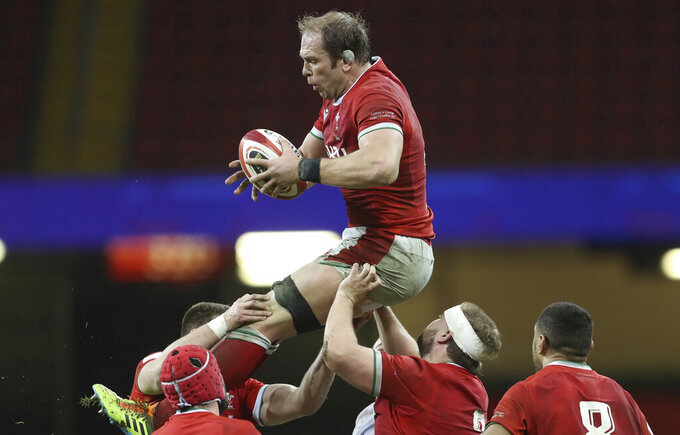 FILE - In this Saturday, Feb. 27, 2021 file photo, Wales' Alun Wyn Jones gathers the ball in a line out during the Six Nations rugby union match between Wales and England at the Millennium stadium in Cardiff, Wales. Wales great Alun Wyn Jones was selected on Thursday May 6, 2021, as captain of the British and Irish Lions for the first time for the tour of South Africa. (David Davies/Pool via AP, File)

In the great Alun Wyn Jones, Warren Gatland went with world rugby's safest pair of hands as his captain for the British and Irish Lions tour of South Africa.

The surprises were saved for elsewhere in Thursday's highly anticipated squad announcement.

One of the mostly evenly spread selections in Lions history saw some of the northern hemisphere's biggest names get overlooked.

No Jonathan Sexton, the Ireland captain who was world player of the year as recently as 2018 and top scorer in this year's Six Nations.

No Billy Vunipola, the No. 8 who has provided much of England's go-forward in the successful Eddie Jones era.

No Jonathan Davies, the reliable Wales center who was the Lions' player of the drawn series against the All Blacks in 2017.

Gatland, understandably, wanted to focus on the players who were selected to go on a tour that was under threat until last month — and still carries with it major uncertainties because of the pandemic.

In a Lions squad that largely reflected this year's highly competitive Six Nations, England, Wales, Ireland and Scotland all had eight to 11 representatives.

Eight Scots is the country’s highest number since 1989, perhaps showing the influence that Scotland coach Gregor Townsend — one of Gatland's assistants — had on selection. One of them is Duhan van der Merwe, a South African-born winger who played for South Africa Under-20s before switching nationalities, and was the top try-scorer in the Six Nations with five.

Jones, tour captain for the first time and in his his fourth straight Lions squad, is one of 10 players from Six Nations champion Wales.

England had 11, a lower-than-anticipated contingent which highlighted the team's struggles in the Six Nations but included Sam Simmonds — a No. 8 without a test cap since March 2018. Quite why he has been ignored by Jones is a mystery, given he is the reigning European player of the year and a superstar for European champion Exeter.

Ireland's eight players did not include 35-year-old Sexton, a player Townsend called one of the “best players in the world."

“Not only does it show the quality of the players we have in the squad,” Townsend said, “it probably shows what's going to be a huge, physical demand on each player out there and he's been unfortunate to miss out because of those reasons.”

Owen Farrell, Dan Biggar and Finn Russell were the flyhalves chosen by Gatland, setting up what could prove to be the most competitive selection fights anywhere in the squad for the test series.

Other leading players overlooked were England pair Kyle Sinckler and Jonny May, and Ireland lock James Ryan. That Bundee Aki was selected ahead of Ireland teammate Garry Ringrose was another nod to the physicality Gatland wants to throw at the Springboks, who haven’t played a game since winning the World Cup in November 2019 due to the pandemic.

“It’s probably using the experience from the last tour, back in 2009," said Gatland, who was an assistant coach that year when the Lions lost a brutal test series 2-1. “We played pretty well in the lead-up but the physicality they brought to the first test was something we weren’t quite ready for.”

One player Gatland couldn't do without is Jones.

He is one of the most respected players in rugby and holds the world record for test appearances at 157, nine of which have come in the last three Lions series. He led Wales to the Six Nations title in March and has been captain of his country on a permanent basis since 2017, when he was handed the role by then-Wales coach Gatland.

Jones was stand-in captain for the series-clinching victory over Australia in the third test in 2013, when Sam Warburton was injured, but has never been tour captain.

The lock is the oldest player to captain the Lions in the professional era and is likely to form a second-row partnership with England’s Maro Itoje, who was also in the frame for the captaincy.

After a warm-up game against Japan at Murrayfield on June 26, the six-week Lions tour is scheduled to start in July and currently will feature five matches against South African domestic and development teams before three tests.

South Africa has had more than 1.5 million reported cases of COVID-19 and more than 54,000 deaths. Its cases have been driven since late last year by a variant that experts says is more contagious.

Only 353,000 people out of a population of around 60 million have been vaccinated and they are health workers. Vaccines have not been rolled out for the general public.

It is still uncertain if fans will be allowed into games. SA Rugby has been trying to convince the South African government, with the hope to have 50% capacity in stadiums.