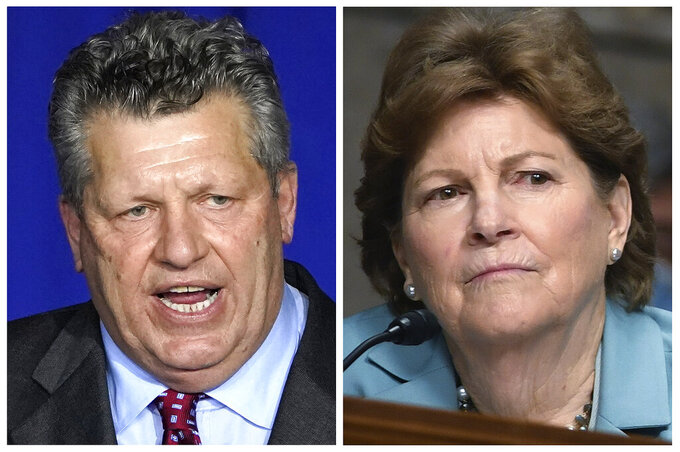 Democratic Sen. Jeanne Shaheen and her Republican challenger Corky Messner clashed in a debate Wednesday over how best to address the economic challenges brought on by the coronavirus.

Shaheen, the first woman in U.S. history to serve as both governor and U.S. senator, is pushing for a more ambitious federal aid package that she says is needed to help small businesses, hospitals, state and local governments. She also wants funding for testing and contract tracing.

Messner, echoing the views of Senate Republicans, called for passing a smaller spending deal now and building on it in the future.

“The latest package should have been passed three weeks ago,” Messner said. “There are small businesses in New Hampshire that need help and and need help now. Democrats are playing politics with that.”

Messner also argued there was too much pork in the coronavirus spending bills approved earlier this year. He took aim at Shaheen whose family received just under $3 million through the government’s small business lending program aimed at saving jobs during the coronavirus pandemic.

“I would propose that this new package contain a provision that no U.S. senator, no congressman, nor their family members can take PPP loans,” Messner said, calling the loans received by Shaheen's family “outrageous." He was referring to the Treasury Department’s Paycheck Protection Program.

Shaheen countered that she played no role in who received the loans, calling Messner “disingenuous” for neglecting to mention that his law firm got “millions of dollars” through the PPP program. Messner did not dispute that claim, only saying he was not a U.S. senator when asked about the loans.

“I didn't sign off on who got approved. I'm not part of my husband's businesses,” Shaheen said. “It was actually the Trump administration that implemented the program and determined who got help through that program.”

Shaheen said she plans to vote against Barrett's nomination and argued that it should have never been made ahead of the November election. She said she was concerned about her position on Roe v. Wade, the Affordable Care Act and whether she might participate if a contested presidential election ended up in front of the court.

“I think there are real questions about what was said between her and President Trump,” she said. “Was there a commitment that if this election is thrown into the court that she would sit on that? I think that is not appropriate given the circumstances under which she was nominated.”

“She is a wonderful choice who will be objective and open-minded about any decision," he said. "That's the kind of person we want on the Supreme Court. She is a wonderful role model for young girls and women just like Ruth Bader Ginsburg was.”

Still, they managed to find some common ground in the hour-long debate.

Both agreed that climate change was a real threat and that the government should be providing incentives to support renewable energy like solar and wind. They also agreed that China is a threat to the United States and that measures should be taken to counter its growing influence.

Shaheen, who called Russia the biggest short-term threat and China more of a long-term concern, played up legislation she has co-sponsored that would provide funding to counter China's economic and diplomatic efforts while calling for greater transparency around Chinese ventures in the United States.

Messner called China a greater threat than Russia and accused the Democrats of having allowed the power of the ruling Communist Party to grow unchecked. “They want to dominate the world economically and military and we can no longer be their research and development arm,” he said. “We cannot allow them to steal our intellectual property anymore."