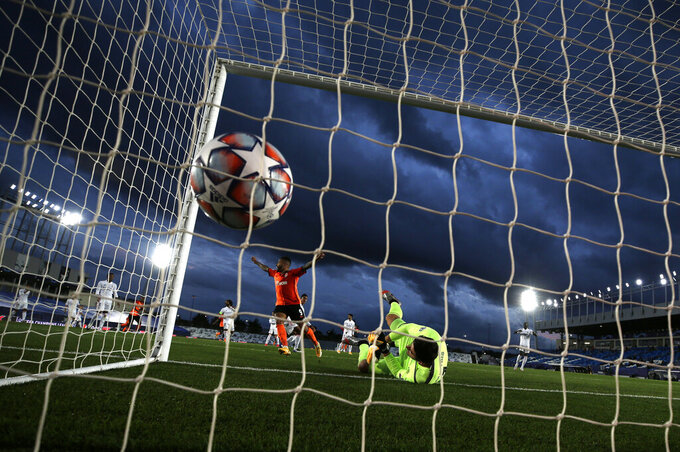 MADRID (AP) — A Shakhtar Donetsk team depleted by coronavirus cases handed Real Madrid a 3-2 home loss in Group B of the Champions League on Wednesday.

Playing with only a few regular starters, Shakhtar took advantage of counterattacks to open up a 3-0 first-half lead, and then held on after Madrid pulled closer with two goals shortly after the break in an empty Alfredo Di Stéfano Stadium.

Madrid thought it had equalized in injury time through Federico Valverde, but the goal was disallowed for offside after video review.

The Ukrainian side opened the scoring through Tetê in the 29th minute and added to the lead with an own-goal by Madrid defender Raphael Varane in the 33rd. Manor Solomon then added the third in the 42nd.

Madrid fought back with a long-range shot by Luka Modric in the 54th and a goal by Vinícius Júnior in the 59th, seconds after he came on as a substitute.

Inter Milan hosted Borussia Mönchengladbach in the other Group B match later Wednesday.

Shakhtar arrived in Spain without several key players who were not fully fit after going into isolation because of positive COVID-19 tests. Seven regular starters and a couple of first-choice substitutes were absent, and coach Luis Castro had to call up seven players from the “B” team.

Madrid coach Zinedine Zidane was without some players because of injury, including captain Sergio Ramos and right back Dani Carvajal, and he made several changes to the starting lineup ahead of the Spanish league “clásico” against Barcelona on Saturday. Toni Kroos and Karim Benzema were among those who started on the bench.

“We didn’t get off to a good start. I think we lacked confidence,” Madrid midfielder Luka Modric said. “We improved in the second half but it wasn’t enough. We have to move on, the next match is coming up soon and we can’t lose time lamenting.”

It was the second consecutive home loss for Madrid, which on Saturday was beaten 1-0 by promoted Cádiz in the Spanish league.

The team was ineffective from the start on Wednesday, unable to get near the Shakhtar goal. The visitors, meanwhile, threatened often and squandered several other scoring chances. Marlos had a goal disallowed for offside in the 80th.

The game was played at the 6,000-capacity Alfredo Di Stéfano at Madrid’s training center because the Santiago Bernabéu Stadium remains under renovation while fans are not allowed into matches because of the coronavirus pandemic.

A 13-time Champions League winner, Madrid was eliminated in the round of 16 in the last two seasons.