Shane Lowry playing golf this week, but not where he thought 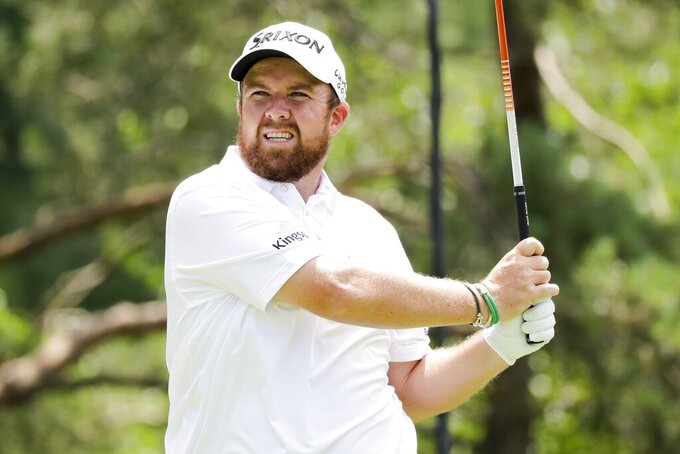 Shane Lowry, of Ireland, watches his drive on the second tee during the second round of the Workday Charity Open golf tournament, Friday, July 10, 2020, in Dublin, Ohio. (AP Photo/Darron Cummings)

DUBLIN, Ohio (AP) — This week should have started with Shane Lowry driving into Royal St. George’s along the eastern coast of England and handing over the silver claret jug, a relatively recent tradition for golf’s oldest championship.

Wednesday should have been the final practice round before the British Open.

Lowry instead found himself in the heartland of America, searching for answers to a name unexpectedly tossed his way.

“Sorry, honestly, I have never heard the name Richard Burton,” he said. “I’m going to have to go home and look at that one.”

They now share something in common, and it’s not conducting a virtual news conference because of the COVID-19 pandemic.

The title “Champion Golfer of the Year” that Lowry earned last summer at Royal Portrush stays with him another year, along with that claret jug. Burton had it a little longer. He won the British Open in 1939 at St. Andrews, and then World War II kept the Open from being played again until 1946.

Lowry knew this was coming.

Golf shut down in March because of the coronavirus, and the British Open was the first major to cancel for the year. It will go to Royal St. George’s next summer.

“I wouldn’t say it’s bittersweet,” Lowry said. “But it is strange. I should be in St. George’s, probably sitting in the press room there as defending champion and wondering how I’m going to go out and tackle that golf course, as opposed to be being here in Ohio. It’s just very strange times for us at the minute, isn’t it?”

Lowry said he has never seen the lunar landscape of Royal St. George’s. He will wait one year to see if he can become the first back-to-back Open champion since another Irishman, Padraig Harrington, in 2007 and 2008.

For now, he’s thankful to be playing.

Lowry hasn’t won since his six-shot victory at Royal Portrush. He felt his game was rounding into form until the shutdown. He returned by missing consecutive cuts for the first time in more than a year. The Memorial is his second straight tournament at Muirfield Village, another example of an odd year.

And it will be his fifth tournament without spectators, another reminder of what he’s missing.

In absence of the Open, the R&A has pulled together championships at St. Andrews and produced a fantasy tournament among the champions. Golf Channel has been airing past Opens, with Lowry’s win at Portrush and Francesco Molinari winning at Carnoustie.

Lowry said he was flipping through channels when Royal Portrush came on. He didn’t stay up for all of it. He knows how it ended. It was good.

The void this week doesn’t feel as large as when the Masters wasn’t held the first full week in April. The PGA Championship was supposed to be held in May, though the move to late summer is still on. For the week of the U.S. Open, golf was in its second week of returning from the pandemic, at Harbour Town. Those majors will be later this year.

Not so for the British Open.

At least Lowry is playing against a field just as strong as if he were in Britain. The Memorial has attracted nine of the top 10 in the world. Jack Nicklaus built a tournament that is among the most elite this side of a major.

“This is huge tournament in its own right, so I’m very happy to be competing here,” Lowry said. “But obviously I’d love to be in St. George’s. Look, I miss the crowds, you miss the kind of buzz, the adrenaline you get from that and I miss all that. I miss being announced on the fifth tee as defending champion, but I’m sure I’ll get that next year.

“So everything that I miss or that I won’t get to do this week, I’m sure I’ll get to do next year.”