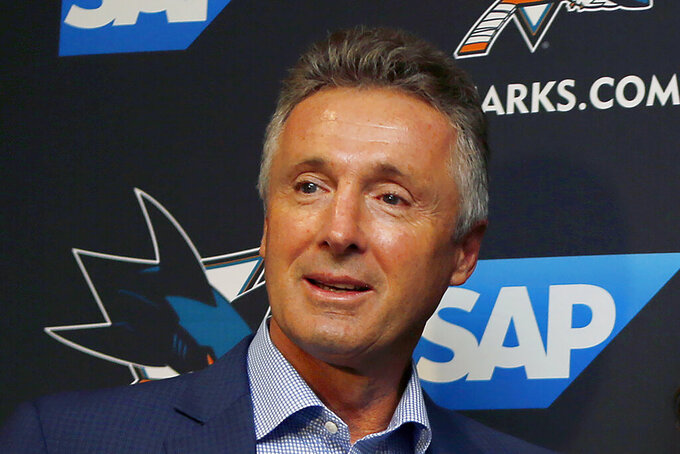 FILE - In this Sept. 19, 2018, file photo, San Jose Sharks general manager Doug Wilson attends a news conference in San Jose, Calif. Wilson characterized his team as being in the middle of a "reset" where taking a step back may be necessary before the franchise can get back into contention after years near the top of the standings. (AP Photo/Josie Lepe, File)

San Jose Sharks general manager Doug Wilson characterized his team as being in the middle of a “reset,” where taking a step back may be necessary before the franchise can get back into contention after years near the top of the standings.

After finishing last in the Western Conference last season when they missed the playoffs for just the second time since Wilson became general manager in 2003, the Sharks are struggling once again in this pandemic-altered season.

They came into Friday with the fewest points in the West Division and are in danger of missing the playoffs in consecutive seasons for just the third time in franchise history.

Wilson said the process began last season when he acquired extra picks at the trade deadline, giving him nine in last year’s draft, and is ongoing as the franchise tries to develop young players to complement Logan Couture, Erik Karlsson, Brent Burns, Evander Kane, Timo Meier and other veterans.

Wilson said he’s been pleased with some of the progress he’s seen and is hopeful of a relatively quick turnaround for a franchise that made it to the Western Conference Final as recently as 2019.

But key players like Joe Pavelski and Joe Thornton are gone from that team and the Sharks are trying to develop a new core to build around.

“We don’t put a timeline on it,” Wilson said. “But we think that there’s no reason why we can’t be back in a very good position by next season.”

It’s been a difficult season so far for the Sharks, who were one of the seven teams that didn’t qualify for the bubble last year and went 10 months without playing a game.

Then when they returned for this season they had to relocate for training camp in Arizona because of coronavirus restrictions in Santa Clara County. The Sharks then played the first 12 and 14 of their first 16 games on the road before finally getting an extended homestand.

They went just 2-4-1 on that homestand but had to play six of those games without forward Tomas Hertl, who had the coronavirus, and also missed injured forward Timo Meier for the final two games.

Wilson said he was encouraged by wins over Colorado and St. Louis and an overtime loss to Vegas on the homestand.

One issue the Sharks must resolve is the goaltending. Martin Jones and Devan Dubnyk have struggled and rank toward the bottom in save percentage, with Jones’ mark of .879 ranking 48th of 49 qualifiers and Dubnyk at 41st (.893).

Jones has had a save percentage below .900 the past three regular seasons and the Sharks hoped the acquisition of Dubnyk would help solve those woes.