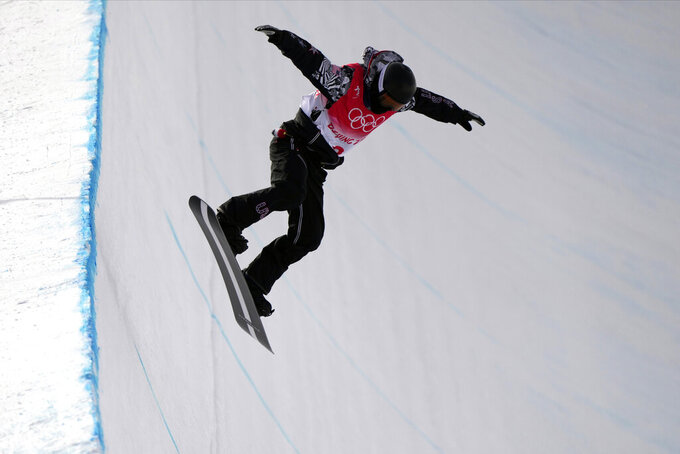 United States' Shaun White trains on the halfpipe course at the 2022 Winter Olympics, Monday, Feb. 7, 2022, in Zhangjiakou, China. White, the three-time gold medalist who said recently the Beijing Games would be his last competition, begins qualifying for the halfpipe Tuesday. “I really want to finish my career strongly on my own terms and put down some solid runs," White said. "If I could do that, I’ll be very happy.” (AP Photo/Francisco Seco)

BEIJING (AP) — Mikaela Shiffrin will have to rebound quickly. Her next chance at a medal is the slalom, but that's a top event for rival Petra Vlhova.

The showdown between those two Alpine skiing stars highlights Day 4 of the Beijing Games, which also includes qualifying runs for Shaun White and Chloe Kim, the start of snowboardcross coverage and the first curling medals of these Olympics.

Shiffrin won the slalom at the 2014 Games and is a four-time world champion in the event. Vlhova, however, has a big lead in the World Cup slalom standings this season, after Shiffrin was slowed by contracting the coronavirus.

A bad turn in the giant slalom Monday knocked the American star out of that event on the opening run. Vlhova, of Slovakia, finished 14th.

“Something was missing, and I was a bit in trouble with the conditions,” Vlhova said. "I tried to do my best, but it was not enough.”

NBC plans to show the women's slalom live as part of its prime-time and late-night coverage Tuesday.

Shiffrin's rough start was a downer for the U.S., but now it's time for a couple other American standouts to begin competing. Shaun White, the three-time gold medalist who said recently the Beijing Games would be his last competition, begins qualifying for the halfpipe. So does Chloe Kim, who, like White is a defending champion in that event.

“I really want to finish my career strongly on my own terms and put down some solid runs," White said. "If I could do that, I’ll be very happy.”

NBC is carrying women's qualifying live in prime time and the men live in its late-night slot. USA Network will also have live coverage of women's halfpipe.

The chaotic, high-flying snowboardcross also begins with the women's competition. Lindsey Jacobellis, who missed out on gold in 2006 when she fell after grabbing her board in premature celebration, is still chasing an Olympic title.

NBC is carrying snowboardcross qualifying during its late-night coverage, and USA Network plans to air the qualifying and final rounds live. The final isn't expected to start until well after 2 a.m.

The mixed doubles competition wraps up when Italy faces Norway for the gold medal. USA Network is set to air that at 1 p.m. CNBC will show the bronze medal game between Sweden and Britain at 5 p.m. and the gold medal game at 8.

“That feels great," coach Claudio Pescia said. “Not only that we have a medal, but the performance these two athletes made this week is amazing.”

Germany’s Natalie Geisenberger is trying for her third consecutive gold medal in singles luge. USA Network will show the final run live in the morning, with an encore presentation by NBC in the afternoon.

Norwegian cross-country skiing star Johannes Hoesflot Klaebo finished 40th in the skiathlon, but he has another medal shot in the sprint. USA Network will have the men's and women's sprints live in the morning, with NBC showing them in the afternoon and USA Network showing them again in the 7:30 p.m.-2:55 a.m. time slot ... NBC will air the final of men's freestyle skiing Big Air live in prime time. ... American speedskater Joey Mantia competes in the 1,500 meters. USA Network will air that between 9:20 a.m. and 1 p.m., and again later. NBC is showing it in prime time.