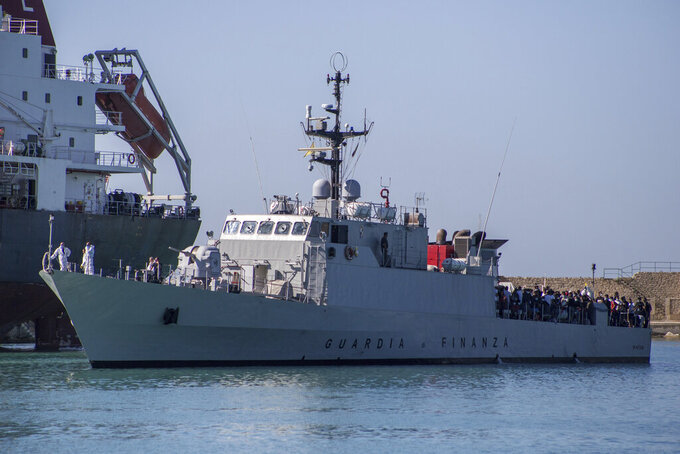 Migrants arrive in Porto Empedocle, Sicily, aboard two military ships after being transferred from the island of Lampedusa, where a number of small boat carrying migrants arrived in the last days, Monday, July 27, 2020. (Fabio Peonia/LaPresse via AP)

Tunisian migrants are now the biggest single national group reaching Italy by sea, and in a sign of concern Italian Interior Minister Luciana Lamorgese met in Tunisia on Monday with her Tunisian counterpart and the country's president.

One held 11 people, wearing sunglasses and shorts, carrying knapsacks and water bottles and a poodle on a leash, Italy's ANSA news agency said. It said their boat was intercepted by the Italian coast guard, which transferred them to a rubber dinghy to take them ashore.

The second boat reached a reef near a popular Lampedusa swimming beach, where an Italian border police boat spotted the seven occupants just as they set foot on land, ANSA said.

But by last week, Italy's interior minister noted in her meeting with Tunisian President Kais Saied, 11,191 migrants landed on Italy's shores this year, 5,237 having set out from Tunisia, and nearly 4,000 of them Tunisian citizens.

Tunisia's deep economic and social crisis is worsened by the pandemic and ensuing lockdown. In June, hundreds of unemployed Tunisians tried to march on parliament to demand a law guaranteeing jobs, and skirmished with police.

Lamorgese’s office said that in her talks in Tunisia on Monday she voiced readiness to help Tunisia find “more effective” ways to operate “surveillance of traffickers’ boats departing from the African coast.”

She also lamented the “serious problems tied to national health security with inevitable repercussions on the local community” due to uncontrolled arrivals of migrants, her office said.

“Tunisian migrants in particular try to leave in every way before obligatory quarantine” in reception centers is completed, the ministry said in a statement.

The Tunisian president expressed the view that the issue of “irregular migration is essentially a humanitarian question” whose causes need to be addressed.

Near the Sicilian town of Caltanissetta on Sunday, some 180 migrants fled obligatory quarantine, although by Monday at least 139 of them had been found. Mayor Roberto Gambino said he pleaded with Lamorgese to stop sending any more migrants his way from Lampedusa, which was being overwhelmed with the arrivals.

Elsewhere in Sicily, some 100 of the 520 migrants being held in a giant tent without windows near the dock of Porto Empedocle, where ferries arrive from Lampedusa, fled quarantine, national daily La Repubblica reported.

Lamorgese later said most had been found.

All this made for fodder for Italy's increasingly popular far-right Brothers of Italy party. “Now that's enough,'' the party's leader, Giorgia Meloni said in a Facebook post, which called on the center-left government to ”immediately stop the disembarkation" of migrants on Italian shores.

After Sicily's governor, Nello Musumeci complained that the island was being treated “like a colony," Lamorgese called to tell him that soldiers will be deployed to prevent escape from quarantine. She said none of the hundreds of migrants had tested positive for COVID-19, and soon all will be quarantined offshore on a ship of “great dimensions.”

Tunisia is one of the very few countries with which Italy has repatriation accords so migrants denied asylum can be flown home. The Italian interior ministry statement said that Tunisian authorities in their talks with Lamorgese “confirmed the regular carrying out of the weekly repatriation operations from Italy.”