Shipbuilders ready to begin voting on 3-year pact in Maine 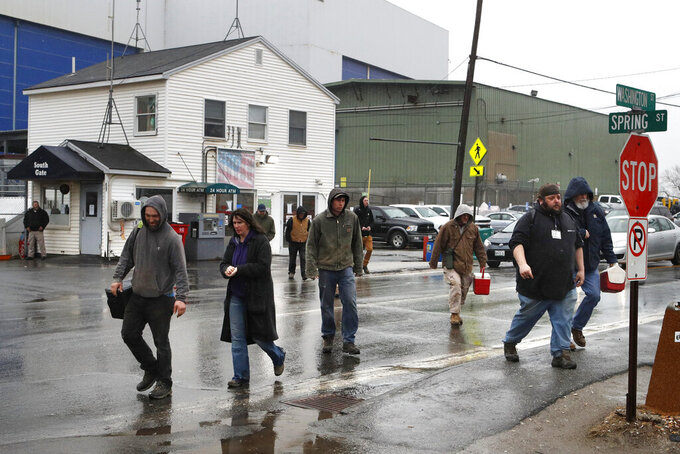 FILE - In this April 3, 2020 file photo, workers leave Navy shipbuilder Bath Iron Works after a shift in Bath, Maine. The largest union at Bath Iron Works begins voting Friday, June 19, 2020 on a contract proposal that was unanimously rejected by its negotiating committee, raising the possibility of the first strike in 20 years. (AP Photo/Robert F. Bukaty, File)

BATH, Maine (AP) — The largest union at Navy shipbuilder Bath Iron Works begins voting Friday on a contract proposal that was unanimously rejected by its negotiating committee, raising the possibility of the first strike in 20 years.

Shipbuilders from Machinists Union Local S6 would see a 9% pay raise over three years under the proposal, but they’re digging in over what they view as concessions on subcontracting, work rules and seniority.

Workers are disgruntled after they said they made concessions in the last contract to win a lucrative Coast Guard contract. Another contractor was awarded that contract.

The union's negotiating committee issued a statement Thursday calling the contract offer “garbage” and accusing the company president of “deceitful, dishonest, despicable, unprofessional and relentless” efforts to destroy the union. The president contends the company negotiated in good faith.

A strike is a “distinct possibility” as about 4,300 workers prepare to cast their votes, said Jay Wadleigh, a district business representative for the Machinists Union.

“We seem to be headed in that direction,” he said.

The company’s three-year proposal would give shipbuilders a 3% raise during each year. But the union's major issue isn't with wages, pensions or benefits.

Instead, there are more than a dozen changes that the union considers to be concessions. Among them, the company wants to use subcontractors to catch up after falling six months behind on work.

The union considers a separate proposal to change preferences for shift and location for work assignments to be an attack on seniority that potentially allows workers to be singled out for abuse.

The company doesn't view the contract as concessionary or an attack on the union. The aim is to streamline the process of hiring subcontractors who are needed despite the hiring 1,800 workers last year and another 1,000 workers this year, said Dirk Lesko, the shipyard's president.

The goal of rules for shifting of workers between assignments is to keep them busy to avoid layoffs during the inevitable lulls for specific skills during construction, he said.

Because of the coronavirus, shipbuilders will cast their votes online or by phone. The voting is due to wrap up Sunday at noon, ahead of the contract expiration at midnight.

Workers will be voting on whether to accept the contract and whether to strike. It would take a two-thirds vote to trigger a strike.

The last contract vote, in late 2015, took place amid dire warnings that as many as 1,200 jobs could be lost if the shipyard failed to win a Coast Guard contract. Another shipyard ultimately won that contract, but Bath Iron Works eventually secured additional Navy contracts.

If anything, the shipbuilding landscape has been even more challenging since then. Bath Iron Works is one of the Navy's five largest shipbuilders, but the Navy has been awarding more contracts for smaller vessels to other shipyards in Alabama and Wisconsin.

Marinette Marine, in Wisconsin, recently beat out Bath Iron Works for a lucrative contract to build a new line of frigates.

Looking ahead, the defense department is considering additional smaller ships and unmanned ships, and the smaller shipyards will likely compete for those, said Matt Caris, naval analyst for Avascent.

“The base of current business is changing even as the competitive landscape is growing or shifting. It puts Bath in a tough spot,” he said.

The pandemic has added to worker angst.

Many lawmakers threw their support behind workers by calling for the Navy and shipyard to institute greater protections as the union asked for the shipyard to shut down for two weeks. The federal government classified the shipyard as essential and production never ceased.

The shipyard continued operations through the pandemic using stringent protocols for disinfecting and distancing. Three workers were sickened by the virus but all returned to work.