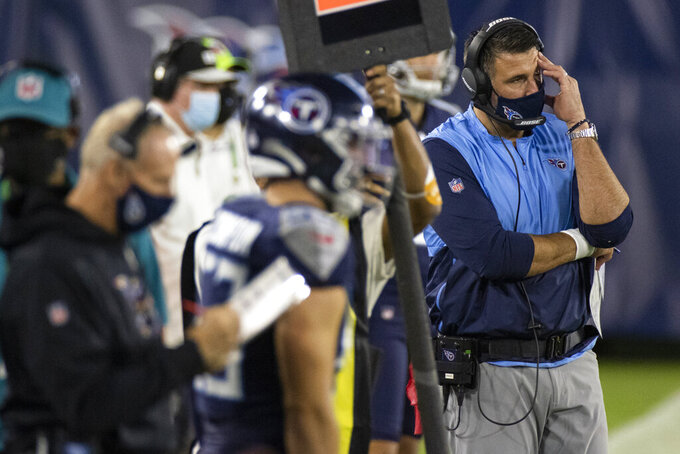 FILE- In this Oct. 13, 2020, file photo, Tennessee Titans head coach Mike Vrabel, right, reacts during the second quarter of an NFL football game against the Buffalo Bills, in Nashville, Tenn. The NFL and the NFL Players Association found instances when the Titans failed to wear masks at all times and were “insufficiently clear” to players about not meeting or working out once the facility closed in a review given to the team Monday, Oct. 19, 2020, a person familiar with the investigation told The Associated Press. But the person familiar with the review says there was no discussion of any discipline for an individual including general manager Jon Robinson, coach Mike Vrabel or any players, and there was no discussion of punishment, including forfeitures or draft picks. (AP Photo/Brett Carlsen, File)

NASHVILLE, Tenn. (AP) — For Jeffery Simmons, being sidelined by COVID-19 and having to watch his Tennessee teammates beat Buffalo without him hurt.

He sat on his couch and tweeted almost a play by play in his desire to get back to work.

“I felt more and more anxious that I really wanted to be on that field, and I was like, ‘this can’t be real that I’m really missing this game,’” said Simmons, who missed only one game and returned to work two days after the Titans' 42-16 win over Buffalo on Oct. 13.

The NFL and the players association are trying to play this season during the coronavirus pandemic that has killed more than 220,000 in the United States, with some survivors left dealing with issues months after infection: fatigue, headaches, muscle and joint paints, fuzzy thinking and organ dysfunction.

Keeping teams healthy enough for games is why the league and its players association have a lengthy list of guidelines, including daily testing, trying to do just that.

Yet the league keeps having to revamp schedules starting with Tennessee and the first COVID-19 outbreak during the season, followed quickly by several positive results in New England. Positive tests have shut down the Atlanta Falcons, Indianapolis Colts and Carolina Panthers at least briefly. Chicago has had a positive test.

Now the Raiders' entire offensive line is on the reserve/COVID-19 list after right tackle Trent Brown's positive test with the rest counted as close contacts, and the NFL moved their game with Tampa Bay from prime time to Sunday afternoon.

“ One, the fact that they are extraordinarily fit and healthy and therefore may indeed have fewer of these complications,” Schaffner said. “And the other is just as with their getting banged-up on the weekends, they’re motivated to get back to work.”

For Simmons, losing his sense of taste and smell were his worst symptoms. Upset stomachs, bad headaches, chills, coughing, diarrhea and sore throats are among the issues reported by other players and coaches testing positive for COVID-19 after clearing the medical testing to return to work.

Being sidelined and not able to work was a much bigger issue than being sick. Zoom meetings are nice, but there's no way to play virtually on game day.

Patriots quarterback Cam Newton didn't want to talk about any symptoms he had after testing positive. He missed a loss at Kansas City pushed back a day. Further positive tests rescheduled the Patriots’ game with Denver by a week.

Reigning NFL Defensive Player of the Year Stephon Gilmore said he never had any symptoms after testing positive. He didn't miss a game because of the rescheduling.

“It wasn’t easy, but a lot of things in life are not easy," Gilmore said. "You got to be able to take it on the chin and be ready to play. You can’t hold your head down, and you have to be mentally strong and go out there and compete for your teammates.”

The Titans, now 5-0, had the biggest outbreak during the season with 24 players, coaches and team staff testing positive between Sept. 24 and Oct. 11. Outside linebackers coach Shane Bowen was packed and ready to fly to Minnesota when he was told on Sept. 26 he had tested positive despite not having any symptoms.

Bowen wound up with a fever, chills, a cough but no headaches or trouble breathing.

Worse was missing the Minnesota game, a 31-30 Tennessee win in which Bowen was replaced as the defensive play caller by head coach Mike Vrabel. Bowen went into quarantine and started preparing for Pittsburgh on his own, a game later postponed and rescheduled from Oct. 4 to Sunday.

Titans safeties coach Scott Booker missed the Bills game. Secondary coach Anthony Midget says he had no symptoms but was stuck watching two games on TV after coaching through Zoom during the week.

Denver star Von Miller and Dallas running back Ezekiel Elliott were among those in the NFL who tested positive for COVID-19 during the offseason. Once training camps opened, several teams had people test positive or come in close contact with someone who had the virus.

San Francisco linebacker Fred Warner didn't want to get into what he went through except that being away from the 49ers for 10 days was frustrating.

“At the same time, I’m just grateful it happened when it did and not during the season,” Warner said. “That’s a blessing. But, yeah, it wasn’t a fun process.”

Miami was the team hit the hardest before the season started with a total of 17 Dolphins on the reserve/COVID-19 list, including members of the defensive and offensive lines. Center Ted Karras slept on the guest bed at his house, trying to keep from bringing anything home to his family.

Forget any social life, parties or even position group dinners this season in the NFL. Three at a time is the limit for anyone gathering together away from team headquarters or at hotels on the road.

“I think everyone's just going home or just here to the facility,” Karras said Monday. “We reported July 28th, and I haven’t been anywhere other than my house or the facility.”