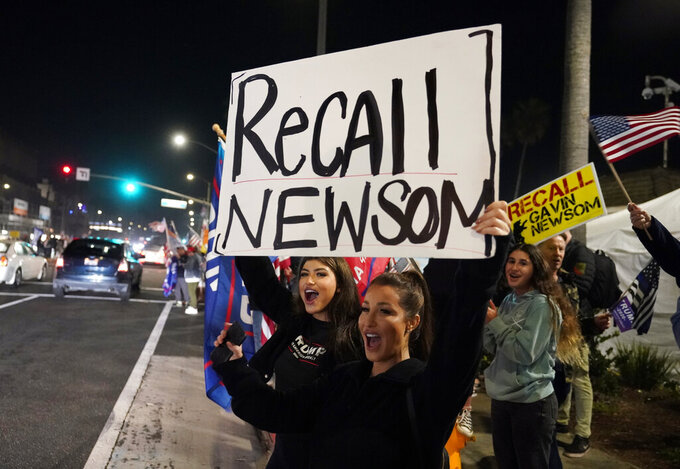 FILE - In this Nov. 21, 2020, file photo, Trump supporters shout slogans while carrying a sign calling for a recall on California Gov. Gavin Newsom during a protest against a stay-at-home order amid the COVID-19 pandemic in Huntington Beach, Calif. A plodding, months-long review kicks off Wednesday, March 17, 2021, to determine if – and when – Newsom will face a recall election that could oust the struggling Democrat from office before the end of his first term. The announcement Monday, March 15, 2021, that Newsom was beginning to raise money to defend his seat appeared to confirm the obvious, in all likelihood, organizers behind the recall effort have collected sufficient petition signatures to place the proposal on the ballot. (AP Photo/Marcio Jose Sanchez, File)

ROCKLIN, Calif. (AP) — A plodding, months-long review kicks off Wednesday to confirm what appears inevitable: California Gov. Gavin Newsom will face a recall election that could oust the Democrat before his first term ends.

The announcement Monday that Newsom was beginning to raise money to defend his seat seemed to confirm that he believes organizers behind the recall have collected sufficient petition signatures to place the proposal on the ballot.

But a series of bureaucratic checkpoints must be cleared before the secretary of state’s office determines that the requirements for scheduling a recall election have been satisfied. The agency is headed by Shirley Weber, a former Democratic legislator Newsom appointed in December.

Recall supporters are required to submit nearly 1.5 million signatures to place the proposal before voters.

Organizers say they have collected more than 2 million signatures since June. Collections surged in the fall and winter as anger intensified about Newsom's handling of the pandemic. So far, more than 80% of the signatures turned in have been validated.

Newsom and his Democratic allies have cast the recall attempt as a politically driven power grab and in appearances on national news programs Monday and Tuesday, he tried to tie the recall to extremist groups.

Wednesday marks the cutoff for organizers to submit signatures to county election officials, who have until April 29 to verify their authenticity and notify the secretary of state with the results.

However, given the various legal hoops that must be cleared, it could take until September before an election date is scheduled, which strategists on both sides expect to be set for later this fall, perhaps November.

Recall organizers believe Newsom and leaders in the Democratic-run Legislature will do everything possible to delay the election, hoping that his fortunes turn as virus cases fall, vaccinations increase and schools and businesses reopen.

“They can’t win at the ballot box. The only way they can win is to delay the system and delay the process,” said recall senior adviser Randy Economy.

The fate of a potential recall election will be decided behind closed doors, where election officials across the state have spent months assessing the validity of petition signatures.

When questions arise about a signature, the benefit of the doubt falls to the voter. Political affiliation and race cannot be considered. An exact signature match is not required — “similar characteristics” in the writing are sufficient when comparing the petition signature with those in election records.

In trying to weed out a phony, reviewers can consider the slant of the writing and how letters are shaped and spaced. But they also must take into account possible explanations for any discrepancy.

Only a signature “possessing multiple, significant and obvious differing characteristics” with those on record will be subject to further review, under state rules. Even then, two officials must agree beyond a reasonable doubt that the signature is significantly different to disqualify it.

But it’s not just a matter of turning in petitions and having them reviewed.

The recall proposal must move through time-consuming steps along the way, including giving voters a 30-day window to withdraw their names from the petitions if they choose. It’s possible Democrats could launch a major advertising drive to urge them to do just that.

Dates have not been finalized, but the state Finance Department is expected to take 30 days to produce a cost estimate for the election. Democrats say it could surpass $80 million. Then, a legislative panel gets another month to review those findings.

Only after those steps are completed can the state formally certify that enough valid signatures have been collected. If that happens, Democratic Lt. Gov. Eleni Kounalakis is required to schedule the election 60 to 80 days after that point, though it’s possible a later date could be set.

Newsom's popularity has tumbled in recent months as public unrest spread over long-running school and business closures, a still-unfolding unemployment benefits scandal and his decision to attend a party with friends and lobbyists at an opulent restaurant while telling residents to stay home.

In a shopping plaza parking lot in the Sacramento suburb of Rocklin, Shannon Hile and Celeste Montgomery collected signatures earlier this month, operating from under a small white folding tent with bright yellow and red signs saying “Recall Gavin Newsom.”

Around lunch hour, more than a dozen people walked or drove up to sign. The two women and another volunteer gave detailed instructions to signers, reminding them to use the address where they are registered to vote and to be careful to write within the lines.

Neither woman voted for Newsom in 2018, when the former San Francisco mayor was elected in a landslide. They’re both outraged over school closings.

Hile moved from San Diego to the Sacramento area to be closer to family after she struggled to simultaneously take care of her 1-year-old while helping her 7-year-old navigate virtual learning at home. Montgomery, 31, also a mother of two, put her 5-year-old son in a private school so he could attend in-person classes, straining the family budget.

Newsom “gave nobody any options to survive this," Hile lamented. "He cut you off from everything and it literally was like sink or swim.”

Two Republicans have announced their candidacies: Kevin Faulconer, the former Republican mayor of San Diego, and Republican businessman John Cox, who was defeated by Newsom in 2018.

Another name being discussed in GOP circles is former President Donald Trump’s then-acting director of national intelligence, Richard Grenell, who has not responded to requests for comment on a possible candidacy.