Silver confident that NBA season can be pulled off safely 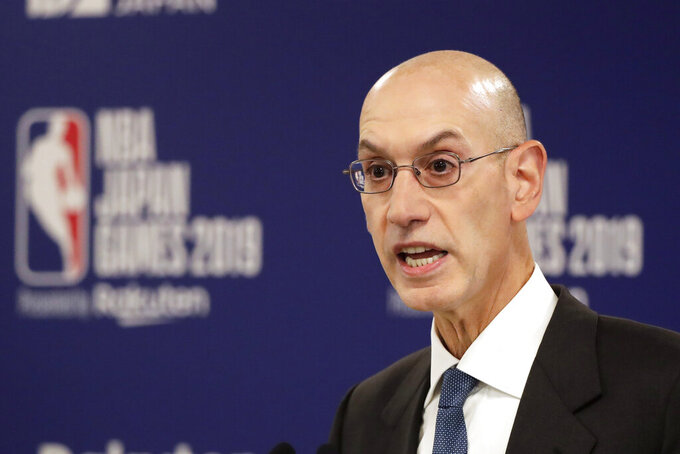 FILE - In this Oct. 8, 2019, file photo, NBA Commissioner Adam Silver speaks at a news conference before an NBA preseason basketball game between the Houston Rockets and the Toronto Raptors in Saitama, Japan. Silver is giving preseason state-of-the-league remarks Monday, Dec. 21, 2020, before opening night Tuesday, talking about how the league will handle the ongoing pandemic and the continued focus on social issues such as racial injustice. (AP Photo/Jae C. Hong, File) 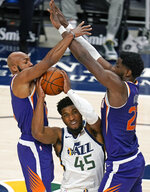 The NBA found a way to get through last season amid a pandemic. Adam Silver sees no reason why the same cannot ring true again this season.

Silver, the the NBA’s Commissioner, said Monday — one day before the new season begins — that he is confident the league’s health and safety protocols will allow teams to get through their planned 72-game regular season slates even as the coronavirus problem rages across the country and the world. He did, however, warn that he expects the virus to create some problems along the way.

“I think we are prepared for isolated cases; in fact, based on what we’ve seen in the preseason, based on watching other leagues operating outside a bubble, unfortunately, it seems somewhat inevitable,” Silver said. “We’re prepared for all contingencies.”

Games could be postponed or canceled along the way, and Silver said that if the league encounters issues that cannot be controlled by what’s covered in the health and safety protocols suspending the season — just as was the case back on March 11, when the 2019-20 season was halted for 4 ½ months — will again be a possibility.

But the league, Silver vowed, will wait its turn to get players and others inside the NBA vaccinated against the coronavirus.

“In no form or way will we jump the line,” Silver said.

Silver spoke on the eve of the season-opening doubleheader — Golden State visiting Brooklyn and the Los Angeles Clippers playing against the defending champion Los Angeles Lakers. He said if the league didn't believe in its plans, the season simply would not be starting.

“We do anticipate that there will be bumps in the road along the way,” Silver said.

Teams will play 10 fewer games than the customary 82-game slate. The season is starting two months later than usual and the playoffs are set to stretch into July, all with players and coaches being tested daily and with nearly 60 players having already missed some time with their teams during training camp and the preseason because of positive COVID-19 tests.

And as was the case at Disney, social justice initiatives remain top priorities for the league, Silver said. The efforts will be different now — for example, “Black Lives Matter” is no longer painted onto game courts, a change from what was the case in the bubble. Buy the commissioner stressed that fighting racial inequality is no less important now than it was then.

“I think there’s also been in a new awakening among the players in the league as to the impact they can have when they use the platforms they have to speak out on issues that are important to them,” Silver said. “So, I think it’s a combination of the collective action that the league will be taking together with its players and coaches, and on top of that players realizing the enormous reach they have with their voices.”

Toronto guard Kyle Lowry said last week that he expects the league to continue driving conversation about the need for societal change.

“For myself, it’s all about action. It’s all about doing it,” Lowry said. “It may not say it on the court or it may not say it on our jerseys or on the back of the jerseys, but it resonates when you’re doing things in your communities, to uplift your communities and to uplift other people. So that’s a big thing, is continuing, yourself, to make it matter.”

The NBA currently expects only six of its 30 teams to open the season with fans in the stands, and no arena is planning to have more than 4,000 ticketholders in the seats at this point. Smaller attendance means smaller revenue, and the league missed its revenue projection by about $1.5 billion last season — largely because many games were canceled and the bubble games, including the playoffs, were played without fans in the seats.

Silver said playing another season without fans would mean NBA revenue would dip about 40%.

“Tens of thousands of people rely on our league and its related businesses for their livelihoods,” Silver said. “We also feel a responsibility to our fans. People continue to look at sports as a break from the challenges of the pandemic and as a small reminder of what life was like before COVID-19. ... It’s a piece of life I feel we’re able to get back, for the time being.”