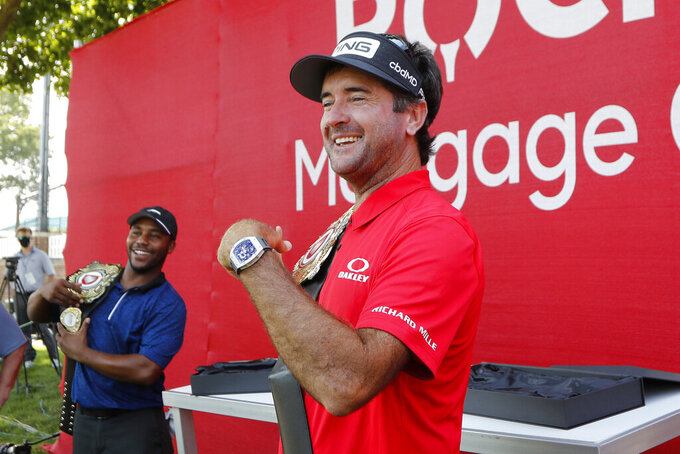 Bubba Watson and Harold Varner III, left, show off the winner's belts after their win in a nine-hole exhibition against Jason Day and Wesley Bryan ahead of the Rocket Mortgage Classic golf tournament, Wednesday, July 1, 2020, at the Detroit Golf Club in Detroit. (AP Photo/Carlos Osorio) 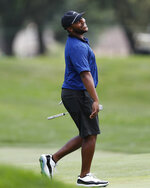 DETROIT (AP) — Webb Simpson is competing on the PGA Tour again after his family had a coronavirus scare.

One of Simpson’s daughters tested positive for COVID-19, leading to him withdrawing from last week’s tournament as a precaution.

“The first test was positive, but (she) got tested again by the more accurate tests, along with my other four kids and my wife, and everyone was negative," Simpson said Wednesday, a day before the first round of the Rocket Mortgage Classic. “So we felt confident that she never had it."

Simpson, who leads the tour in FedEx Cup points and scoring average, is attempting to become the PGA Tour's first player with three victories during this pandemic-interrupted year.

Most importantly, the No. 6 player in the world is trying to stay healthy. And Simpson does not believe that doing his job is putting him or his family at risk.

“I mentioned to the commissioner last week that based on our numbers, our stats, I told him the safest place anyone can be in the United States right now is on the PGA Tour," Simpson said. “We had at that point, I think seven out of 2,300, 2,400 positive, which is amazing. ... But I do think the elephant in the room and the tough thing that they’re dealing with every week is these positives."

Chad Campbell withdrew from the Rocket Mortage Classic on Tuesday after becoming the sixth player to test positive for the coronavirus as the PGA Tour entered a fourth week of its restart.

The tour policy requires self-isolation for at least 10 days. Earlier this week, Harris English tested positive and also withdrew from the tournament.

“Guys are so aware of how easy it is to catch this disease that I think everyone else is becoming more strict," Simpson said. “That first week at Colonial there were still fist bumps after the round, closer contact I think on the range or player dining. There’s way less of that now.

“Now, nobody’s touching. Maybe an elbow here or there. I’m definitely seeing how it’s affecting everyone, not just those who have had contact with someone."

While the PGA Tour has resumed play, the pandemic is keeping the fans away.

That will take away a chance for defending champion Nate Lashley to hear the roar of the crowd again in the Motor City.

“It’s a little different, you know, not having fans here," he said.

Last year, Lashley went from being an anonymous player to someone fans wanted to root for during a wire-to-wire victory, his first on the PGA Tour, after they heard about how his parents and girlfriend were killed in a 2004 plane crash.

Lashley won the inaugural Rocket Mortgage Classic by six shots. He will be paired Thursday with Simpson and Rickie Fowler.

“Rickie and I, we decided that we’re just going to follow Nate around and whatever he hits because he shot 25 under last year," Simpson joked.

The field includes just 18 of the top 50 in the world ranking and none of the top five. In the previous three PGA Tour events, the top five competed each week.

Simpson, along with Bryson DeChambeau, the only player with top-10 finishes in each of the last three tournaments, and No. 7 Patrick Reed, are among the favorites to earn the winner's share of $1.35 million.

The Donald Ross-designed Detroit Golf Club is a short course by PGA Tour standards. The greens have significant slopes and multiple tiers that potentially pose a challenge if there are windy conditions.

Chances are, though, the field will take full advantage of the old-school course and continue a trend in which many are going low.

Over the last three weeks, there have been 56 rounds of 64 or better and 14 players have set or tied their career low scores on the PGA Tour despite coming off a three-month break.