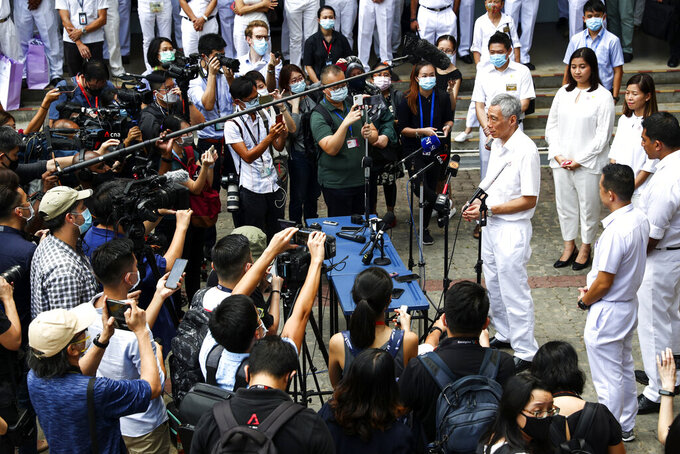 SINGAPORE (AP) — Singapore Prime Minister Lee Hsien Loong's estranged brother is not running in next month's general election but said Tuesday he hopes to be a “catalyst for change" as campaigning began.

Lee Hsien Yang, who brought his family feud into politics by joining an opposition party, said the governing People’s Action Party had “lost its way” from when his father, Lee Kuan Yew, was prime minister. Hitting out at his brother, he said empirical evidence showed that dynastic politics causes bad government and that Singapore's leadership had failed the people.

“I have chosen not to stand for political office because I believe Singapore does not need another Lee," Lee Hsien Yang said in a statement on Facebook. “I do not seek power, prestige or financial rewards of political office. I hope to be a catalyst for change.”

“We need new ideas to reinvigorate Singapore. We must have genuine discussions and rigorous debate involving a diversity of Singaporean voices as we seek to navigate the challenging waters ahead," he added, urging Singaporeans to “vote fearlessly” for a better future.

The PAP, which has ruled Singapore since 1959, has been praised for its economic management but also criticized for muzzling the media and dissenting voices. It won a landslide victory in 2015 with 69.9% of total votes and swept 83 out of 89 parliamentary seats. This year, it faces contests for all 93 parliamentary seats but the opposition is fragmented.

Prime Minister Lee, 68, told reporters after submitting his candidacy Tuesday that he wasn't worried about his brother's sway over voters. The elections are expected to be the last for Lee, who has ruled since 2004 and plans to retire.

“As for Lee Hsien Yang, I have no comment. He is entitled to speak, like anybody else. Nowadays on social media we can have five, six million voices on the internet. The public will assess which ones are worth listening to, which ones make sense," the prime minister said.

The Lee brothers, whose father Lee Kuan Yew was Singapore’s prime minister for 31 years and turned it into an affluent city-state, have engaged in a public spat since 2017 over the future of the late patriarch’s family home.

Lee Hsien Yang and his sister Lee Wei Ling accused their eldest brother of abusing his power to stop them from demolishing the family home according to the wishes of their father, who died in 2015. They accused him of seeking to preserve the house to maintain his own political popularity and legitimacy. Lee Hsien Loong said the government should be allowed to decide whether to maintain the house as part of the national heritage and that he had no role in the decision.

Prime Minister Lee “is seeking to lead the PAP to another famous victory this time amid the global pandemic,” said Eugene Tan, a law lecturer at Singapore Management University . “If the PAP fares poorly, however, it would trigger a deep review and raise serious questions about what the mandate means.”

Opposition parties have accused the government of putting politics above public safety by holding the polls during the coronavirus pandemic but Prime Minister Lee has said they can be held safely. Campaigning will be muted, with strict safe distancing measures and rallies banned. More polling centers will be set up, the 2.65 million eligible voters will be given specific times to cast their ballots to reduce crowding and priority will be given to senior citizens.

On Tuesday, politicians wore masks at nomination centers to submit their candidacies but the usual fanfare and loud throngs of supporters waving party flags were absent.

The tiny city-state, which has one of the highest coronavirus infection rates in Asia with more than 43,000 cases, earlier this month removed most lockdown restrictions. Most of the infections are linked to foreign workers’ dormitories but have since declined, while cases outside the dorms have stabilized.