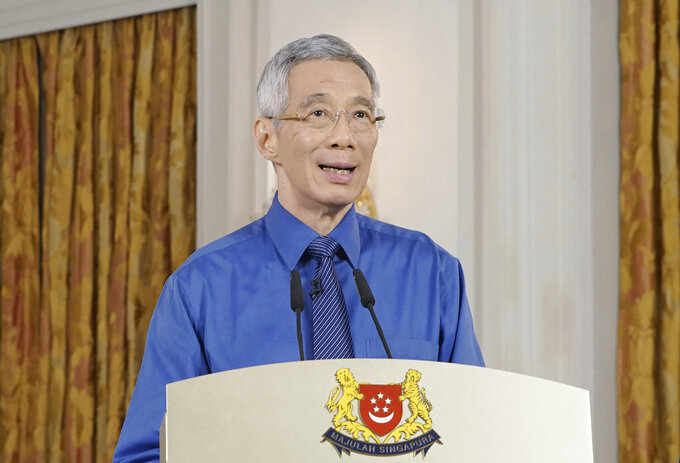 In this handout photo taken and released Tuesday, Apr. 21, 2020, by Singapore's Ministry of Communication and Information, Prime Minister Lee Hsien Loong provides an update on the COVID-19 situation in the city state. Singapore has announced that it would extend its lockdown by another four weeks after a sharp upsurge in COVID-19 cases in recent days. (Singapore Ministry of Communication and Information via AP)

The tiny city-state reported 1,111 new cases earlier Tuesday to increase its total to 9,125, the most in Southeast Asia. It marked the second straight day of over 1,000 new cases after a single-day high of 1,426 were announced on Monday. Foreign workers staying in crowded dormitories account for nearly 80% of infections.

Lee said the sharp upsurge in cases was due to aggressive testing of workers in the dorms, including those who are asymptomatic.

Although the viral clusters in the dorms have remained largely contained, Lee said circuit-breaker measures that shut down nonessential businesses and schools until May 4 will be extended to June 1 or until infections ease.

He said this will allow the government to detect and contain the virus spread early if there is a transmission from the dorms to the wider community.

Although the number of new cases in the wider community has dropped to below 30 per day, Lee said there is still a number of cases that cannot be linked to any clusters, suggesting a larger, hidden reservoir of cases in the community.

“Many will be disappointed by the extension of the circuit breaker, especially our businesses and workers, who are hurting greatly," Lee said in a televised speech. “But I hope you understand that this short-term pain is to stamp out the virus, protect the health and safety of our loved ones, and allow us to revive our economy."

Praised for its swift response and meticulous tracing of contacts in the early stage of the crisis, Singapore is grappling with an explosion of cases in foreign worker dorms that were largely overlooked earlier.

Singapore has nearly 1.4 million migrant workers, a third of its labor force, including more than 300,000 in the construction sector alone. More than 200,000 workers from Bangladesh, India and other poor Asian countries live in 43 registered dormitories that house up to 20 in a room with shared facilities. Tens of thousands more stay in other dorms or at temporary quarters at construction sites and other areas.

The health ministry said all types of foreign worker dormitories will be locked down starting Wednesday. It said the government is also monitoring workers who live in shophouses as well as private and government housing. It said some 180,000 construction workers and their dependents have been ordered to quarantine themselves at home.

Lee said workers in essential services like cleaning and maintenance are also being tested and housed separately to ensure they don't become potential channels for cross infection.

The government has also whittled down the list of essential services to reduce the number of workers, closing hairdressers and barbers, pet supply stores and retail laundries, among others.