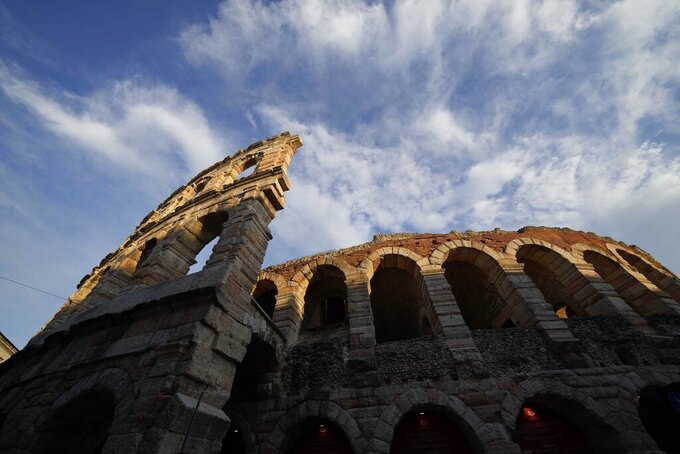 FILE- A view of the Arena in Verona, Italy, Friday, June 25, 2021. After three consecutive Winter Games in Asia, plus the 2010 edition in Vancouver, the 2026 Olympics will mark a return to Europe and the Alps. The 2026 Games will be the most widespread Olympics ever, with venues spread out over 22,000 square kilometers (nearly 10,000 square miles) over a vast swath of northern Italy — from the regions of Lombardy and Veneto to the provinces of Trento and Bolzano. (AP Photo/Luca Bruno, File)

BEIJING (AP) — From the cosmopolitan fashion of Milan to the Alpine chic of Cortina d’Ampezzo, the next Winter Olympics are being promoted as a feast of culture, cuisine and — obviously — sports.

After three straight Winter Games on new slopes in Sochi and in Asia, plus the 2010 edition in Vancouver, the 2026 Olympics will be back in the Alps.

For the International Olympic Committee, going back to Europe’s most famous mountain range — where the Winter Games made their debut in 1924 at the French resort of Chamonix — will mark a return to more familiar terrain after taking the Games to new audiences in Sochi, Pyeongchang and Beijing.

Yet several European skiers — including two prominent Italians — have reservations about how the Milan-Cortina Games are being organized.

The 2026 Games will be the most widespread Olympics ever, with venues spread out over 22,000 square kilometers (nearly 10,000 square miles) across a vast swath of northern Italy — from the regions of Lombardy and Veneto to the provinces of Trento and Bolzano.

“There will be no Olympic spirit,” three-time Olympic medalist Federica Brignone said this week after her bronze in giant slalom, before winning another bronze in Alpine combined.

“Everyone will be in their own area. It’s good to take advantage of the existing structures and not consume and build new venues; from an ecological standpoint it will be much better," Brignone added. "But in terms of Olympic atmosphere, I’m not sure how it will be but I don’t think it will be very nice.”

The 2026 organizers have heeded IOC president Thomas Bach’s reform plan, Agenda 2020, which allows for more flexible bids that take advantage of existing infrastructure — even if that means using venues far flung from the Games’ main city.

The division of Alpine skiing between Bormio and Cortina will keep the men and women, respectively, divided by a five-hour car ride that includes a detour into Switzerland because the most direct route goes over mountain passes that are closed in winter.

“I don’t like that,” Norwegian skier Lucas Braathen said. “It’s so cool to have everyone be in one location. I’m here to make new foreign friends and to see all types of culture, and then they’re dividing us.”

Defending World Cup giant slalom champion Marta Bassino cited organizational problems at her home world championships in Cortina last year — which was held without spectators because of the pandemic.

“Even without fans it was difficult and bothersome. The parking was an issue,” Bassino said. “Those are the small details that make a difference.”

Construction delays are also an issue with the official handover to Milan-Cortina coming up at Sunday's closing ceremony in Beijing.

A century-old sliding track in Cortina needs to be completely rebuilt at a cost of nearly $60 million. Work hasn’t started yet, although the Veneto region presented a reconstruction plan for the track in December.

In Baselga, refurbishment work on the outdoor speedskating track, again, has not started.

Likewise, the more than $1 billion slated for road and railway improvements, plus other infrastructure, has not been put to use for the most part.

“We are way behind,” organizing committee president Giovanni Malago, who is also president of the Italian Olympic Committee, said in November.

A new mayor in Turin has shown interest in hosting speedskating at the existing indoor oval built for the 2006 Games — if Baselga doesn't work out.

Still, there are four years to go.

“We’ll put on a great show,” said Giuliano Razzoli, the 2010 Olympic slalom champion who likely competed in his last Olympics in Beijing. “And the entire world will want to come to Italy.”