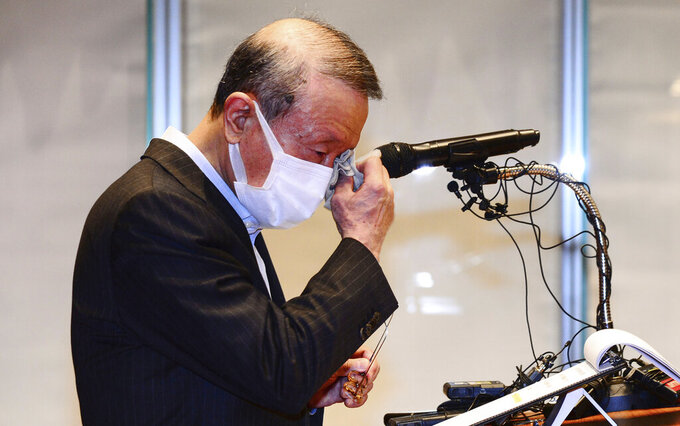 Hong Won-sik, chairman of Namyang Dairy Products, wipes his tears during a press conference at the company's headquarters in Seoul, South Korea, Tuesday, May 4, 2021. Hong resigned over a scandal in which his company was accused of deliberately spreading misinformation that its yogurt helps prevent coronavirus infections. (Hwang Gang-mo/Yonhap via AP)

SEOUL, South Korea (AP) — The chairman of one of South Korea’s biggest dairy companies has resigned over a scandal in which his company was accused of deliberately spreading misinformation that its yogurt helps prevent coronavirus infections.

While stepping down as the company’s head, Hong Won-sik and other members of his family will retain their commanding share in Namyang Dairy Products.

Namyang financed research it aggressively promoted through the media and a symposium it funded last month that claimed its Bulgaris yogurt drinks were effective in lowering the risk of coronavirus infections.

Namyang’s stock price rose temporarily before the Ministry of Food and Drug Safety sued the company for false advertising, saying the research was dubious and never involved any animal testing or clinical trials.

“I express my sincere apology for causing disappointment and anger to our country’s people with the Bulgaris-related controversy at a time when the nation is undergoing a hard time because of COVID-19,” Hong said, tearing up. He said he will take “all responsibility” by stepping down as chairman and promised not to pass on management rights to his children, which is a much-criticized practice at South Korea’s family-owned businesses.

— Sri Lanka has received its first batch of Russia’s Sputnik V vaccine following a delay in getting COVID-19 vaccines from India. The 15,000 doses were flown in Tuesday. Sri Lanka has ordered 13 million Sputnik doses, and Channa Jayasuma, the state minister for drug regulation, said he was hopeful Sri Lanka would receive the total order in the future. Sri Lanka is short 600,000 doses of the Oxford-AstraZeneca vaccine. It has administered the first shot to 925,242 people, but the health ministry has only about 350,000 doses, leaving people short the required second dose after a delay in getting the vaccines ordered from India. Meanwhile, coronavirus infections have spread rapidly. Sri Lanka has banned public gatherings and parties, schools are closed, and supermarkets and shopping complexes are limited to 25% of their customer capacity. It has counted 111,753 cases with 696 fatalities.

— North Korea is warning its people to brace for a prolonged struggle against the coronavirus, claiming that broadening outbreaks and muddled immunization programs in other countries show vaccines aren’t the ultimate solution. The column published by Pyongyang’s official Rodong Sinmun newspaper came amid questions on when and how vaccines would arrive in North Korea. The U.N.-backed program to ship COVID-19 vaccines worldwide said in February that North Korea could receive 1.9 million vaccine doses in the first half of this year. However, COVAX has since warned of global shortages because of India's surging outbreak. The North has claimed a perfect record in keeping out COVID-19, but outside experts have doubted the claim. The state newspaper took an apparent shot at India’s anti-virus campaign without naming the country. It said a certain nation that had “exported vaccines it produced while publicly insisting that it considers the evil virus as defeated,” was now experiencing an explosive surge. “The cases of other countries provide further proof that vaccines aren’t an all-around solution,” the newspaper wrote.

— South Korean officials say North Korea has told Asia’s soccer governing body it will not participate in World Cup qualifiers scheduled in South Korea next month because of coronavirus concerns. Kim Min-soo, an official from South Korea’s Football Association, said Tuesday that the Asia Football Confederation has asked North Korea’s soccer association to reconsider its decision. He said North Korea notified the AFC of its intent to drop out of the matches on Friday. North Korea’s Olympic committee also said last month it has decided to drop out of the Tokyo Olympics to protect its athletes from the coronavirus. An official from South Korea’s Unification Ministry, which deals with inter-Korean affairs, said Seoul still hopes that North Korea will participate in the soccer matches in South Korea, saying they would provide a rare opportunity for sports exchanges during a sharp chill in bilateral relations. North Korea has stopped virtually all cooperation with South Korea and resumed testing of short-range weapons amid a stalemate in larger nuclear negotiations between the North and the United States. The two Koreas belong to Group H in the second round of Asian qualifiers for the 2022 World Cup. Following a monthslong delay because of the pandemic, the remaining group matches are set in South Korea in June.

— The World Health Organization is set to decide this week whether to approve two Chinese vaccines for emergency use against COVID-19. Mariangela Simao, WHO’s assistant director-general for access to medicines, vaccines and pharmaceuticals, said Monday some “final arrangements” remain to be made before the crucial word from a WHO technical advisory group comes on the Sinopharm and Sinovac vaccines. The expected move would trigger broader use for the two vaccines in other countries.