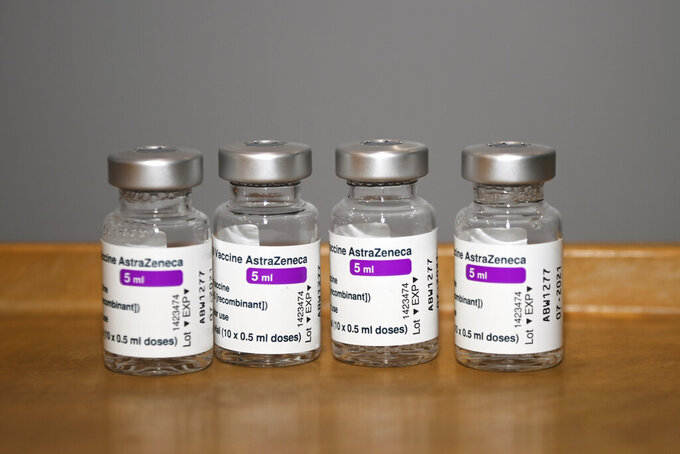 Vials of the AstraZeneca COVID-19 vaccine sit in a table at the local vaccine center in Dunajska Streda, southern Slovakia, March 14, 2021. The AstraZeneca coronavirus vaccine should remain part of Slovakia’s vaccination program the country’s Health Minister said on Wednesday, May 12. Slovakia on Tuesday halted use of the two-shot AstraZeneca vaccine after Slovakia’s State Institute for Drug Control concluded last week that the death of a 47-year-old woman who received the AstraZeneca was “likely” linked to the vaccine. (Edmund Orzsik/TASR via AP)

BRATISLAVA, Slovakia (AP) — Slovakia's health minister says he plans to keep AstraZeneca in the country's vaccine arsenal, speaking a day after the country suspended use of the shots after a recipient died.

Slovakia on Tuesday halted use of the two-shot AstraZeneca vaccine after its State Institute for Drug Control concluded last week that the death of a 47-year-old woman who received the AstraZeneca was "likely” linked to the vaccine.

AstraZeneca is still being administered, however, to those who have already gotten the first dose and are awaiting a second shot. It's currently being given to people between the ages of 18 and 44.

Health Minister Vladimir Lengvarsky said the cause of woman’s death was still under investigation. He said another, and the main reason, for the suspension was that Slovakia does not have enough AstraZeneca shots to continue their administration.

Slovakia, like other members of the European Union, have seen a drop in deliveries from the company.

“We still count on AstraZeneca in our vaccination plan,” Lengvarsky said.

Millions of doses of AstraZeneca have been safely administered in Europe, but concerns linger over a rare type of blood clot seen in an extremely small number of recipients.

Denmark and Norway, countries which are very cautious with all vaccines, suspended their use of AstraZeneca shots in March amid news of the rare blood clots.

Lengvarsky said his ministry was working to allow people to have a free choice beginning in June among the available vaccines, “including the unregistered ones.”

Slovakia has 200,000 doses of Russia-made Sputnik V vaccine available but has not allowed its use yet. Lengvarsky said use of the Russian shots might possibly also start in June. He still has to approve Sputnik V's use.

Slovakia has been administering Pfizer, Moderna and AstraZeneca, and is expected to have Johnson & Johnson soon.

It would be only the second European Union nation after Hungary to use Sputnik V, which has not been authorized by the European Medicines Agency.