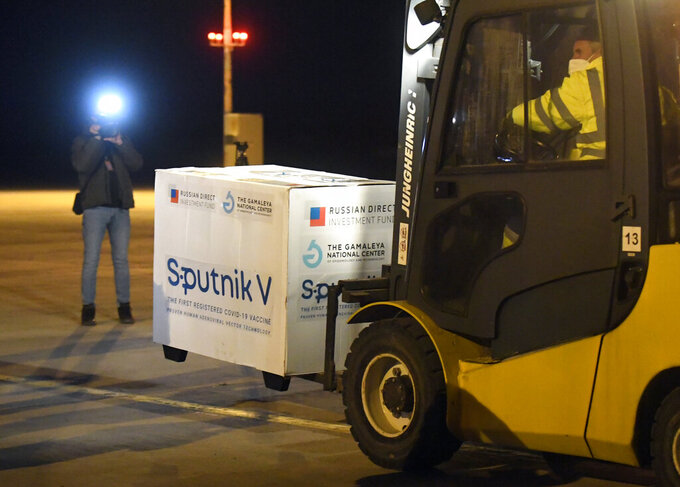 FILE - In this March 1, 2021, file photo, Russia's Sputnik V coronavirus vaccine arrives at Kosice Airport, Slovakia. Russia’s boast in August that it was the first country to authorize a coronavirus vaccine led to skepticism because of its insufficient testing on only a few dozen people. Now, with demand growing for the Sputnik V, experts are raising questions again, this time over whether Moscow can keep up with all the orders from countries that want it. (Frantisek Ivan/TASR via AP, File)

PRAGUE (AP) — Slovakia’s Health Minister announced his resignation on Thursday in a deal to defuse a political crisis over the acquisition of a Russian vaccine, which had threatened to topple the coalition government.

Marek Krajci’s resignation was requested by two parties in the four-party coalition in a country that's been among the hardest-hit by COVID-19 in the European Union. Krajci was been under fire for his handling of the pandemic.

Matovic called his resignation a “painful” but correct decision because it prevented “a collapse of the government and early elections.” It was not immediately clear who will replace Krajci.

The crisis was triggered last week by a secret deal to acquire Russia’s Sputnik V coronavirus vaccine, orchestrated by Matovic despite disagreement among his coalition partners.

Matovic has defended the deal to buy 2 million Sputnik V vaccines, saying it will speed up the vaccination program.

But the Freedom and Solidarity coalition party said the purchase cast doubts on the country’s clear pro-Western orientation. The party joined forces with another coalition partner, For People party, to demand a reconstruction of the government. For People said any vaccine needs approval from the EU’s drug regulator, which has not happened with Sputnik V.

The parties often clashed with Matovic over how to tackle the pandemic before but the current crisis was the most serious the coalition has faced.

The seven-day rolling average of daily deaths has risen over the past two weeks from 1.59 per 100,000 people on Feb. 24 to 1.72 on Wednesday, according to John Hopkins University, the second worst result in the world.

With the hospitals filled up with COVID-19 patients, the country asked other EU nations to send medical personnel to help.

Three doctors and five nurses from Denmark and two doctors and a nurse from Belgium were expected to arrive Friday to work at the F. D. Roosevelt University Hospital in the central city of Banska Bystrica. A team of 14 doctors and nurses from Romania have been already working in Slovakia.