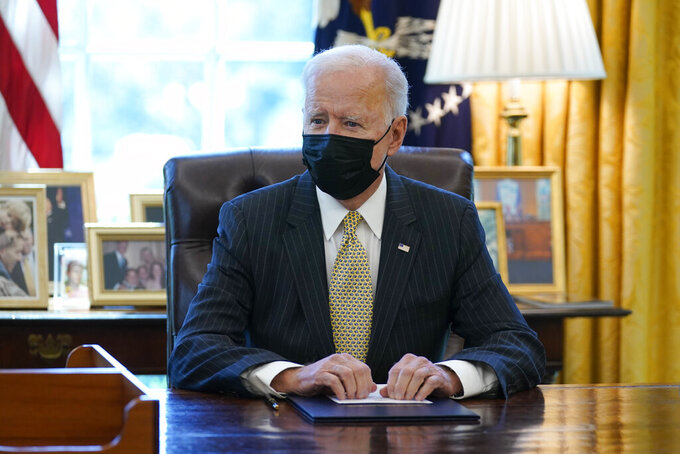 FILE - In this March 30, 2021 file photo, President Joe Biden speaks after signing the PPP Extension Act of 2021, in the Oval Office of the White House in Washington. The government's key COVID-19 relief program for small businesses has run out of money. The Small Business Administration said Wednesday, May 5, that the Paycheck Protection Program has been exhausted. As of Sunday, the PPP had given out nearly 10.8 million loans worth more than $780 billion since April of last year. (AP Photo/Evan Vucci, File)

The Small Business Administration said Wednesday that the Paycheck Protection Program has been exhausted. As of Sunday, the PPP had given out nearly 10.8 million loans worth more than $780 billion since April of last year.

The program, which has run out of cash and refunded by Congress twice before, was scheduled to expire May 31. It’s not yet known if lawmakers will approve another round of funding.

The SBA said in a statement it will still fund applications that have been approved. New applications made through Community Financial Institutions, which are financial lenders that serve underserved communities, would also be funded.

More than half the loans and nearly a third of the loan money were distributed this year. The average loan size was $46,000, less than half the $101,000 average loan in 2020. That is a sign that smaller companies unable to get loans last year were now getting funding. Companies have been drawn to the loans because they promised forgiveness if the money is used for payroll and other essentials.

But, while the PPP helped save many companies devastated by the pandemic, the Biden administration has estimated that more than 400,000 U.S. businesses have permanently closed due to the virus.

More aid is still available to small businesses through SBA Economic Injury Disaster Loans, and restaurants with no more than 20 locations can apply for grants through the Restaurant Revitalization Fund that began accepting applications on Monday. Help is also available to owners of theaters and other entertainment companies under the Shuttered Venues Operator Grants.

The PPP has been criticized because many very small companies, including those owned by minorities, struggled to have their applications accepted by banks. Many of these companies had to wait weeks or months until community banks, credit unions and online lenders were added to the SBA's roster of financial institutions.

“The program was always fundamentally flawed as it was based on an unequal traditional banking system,” said John Arensmeyer, CEO of Small Business Majority, an advocacy group. Congress should consider more grants to help companies still struggling due to the pandemic, he said.

Karen Kerrigan, president of the Small Business & Entrepreneur Council, said she was “getting a sense from conversations on Capitol Hill that PPP has run its course." She said private-sector investment and lending is needed to help small businesses recover, and to help new companies launch.

The PPP was also criticized because it imposed restrictions on sole proprietors without employees. For example, they could not apply for loans until a week after the program began on April 4, 2020. Many also found it difficult to meet the paperwork requirements for loans.

Keith Hall, president of the advocacy group National Association for the Self-Employed, said any companies whose applications were delayed because of restrictions should still get their loans, even if it means Congress needs to allocate more funds to the PPP.