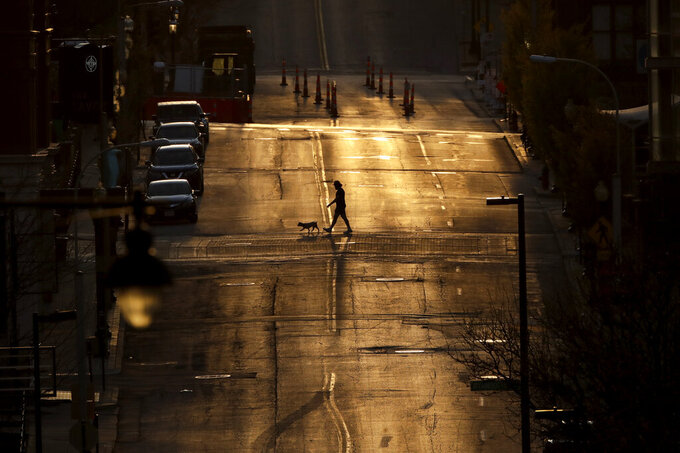 A man walks a dog on an empty downtown street as the sun sets Wednesday, April 1, 2020, in Kansas City, Mo. (AP Photo/Charlie Riedel)

COLUMBIA, Mo. (AP) — Smaller local governments are issuing stay-at-home orders to slow the spread of the coronavirus in Missouri, where the governor hasn't issued a statewide order.

Such orders took effect more than a week ago in the state's biggest cities, including Kansas City and St. Louis, but smaller counties with few or no COVID-19 cases are now telling residents to leave home only for essential reasons, such as to buy groceries or medicine.

The order in St. Francois County, in southeastern Missouri, takes effect on Friday, The Kansas City Star reported. The county has 10 cases as of Wednesday morning.

“In our case, in absence of a statewide action, we had to take action for our own community,” said Amber Elliott, director of the St. Francois Health Center, which issued the order in coordination with the county commission.

“All the orders in the world we can fight and we can print and we can send out, but at the end of the day, you as an individual are going to have to decide: Are you willing to protect somebody’s life?" Parson said.

Missouri had 1,831 cases as of Thursday, according to the state health department. That's roughly a 16% increase in cases from a day earlier, when the state reported 1,581 confirmed cases. Among those with the disease is former St. Louis Cardinals outfielder Jim Edmonds, who wrote on Instagram that the virus is “no joke."

The state also has had 19 coronavirus-related deaths, including five residents of a Springfield assisted living facility and two residents at a St. Charles nursing home. Another 19 residents and staff at the nursing home have tested positive.

Deborah Sherz, a retired nurse who signed an online petition calling on the city of Joplin to issue a stay-at-home order, said she's watched neighbors have numerous visitors at a time, the Joplin Globe reported. She said "people don't understand the risk" because government leaders are allowing social distancing rules that she says are inadequate.

The virus and the efforts to slow it have taken a financial toll. Data released Thursday by Parson's administration showed that unemployment claims in Missouri increased to more than 104,200 for the week ending March 28, up from roughly 42,200 the prior week. That a sharp increase over the same two-week period a year ago, when there were a total of 6,402 claims.

Parson said unemployment claims are at “unimaginable, historical highs" and that Missouri's labor department has been getting more than 100,000 calls a day.

St. Louis county officials on Thursday sent warning letters to about 50 nail salons, dine-in restaurants, bars and other businesses that have continued to operate despite being deemed non-essential. County Executive Dr. Sam Page said non-compliant businesses might not have access to grants from a $2 trillion relief package passed by Congress last week.

For most people, the coronavirus causes mild or moderate symptoms, such as fever and cough that clear up in two to three weeks. Older adults and people with existing health problems are among those particularly susceptible to more severe illness, including pneumonia.