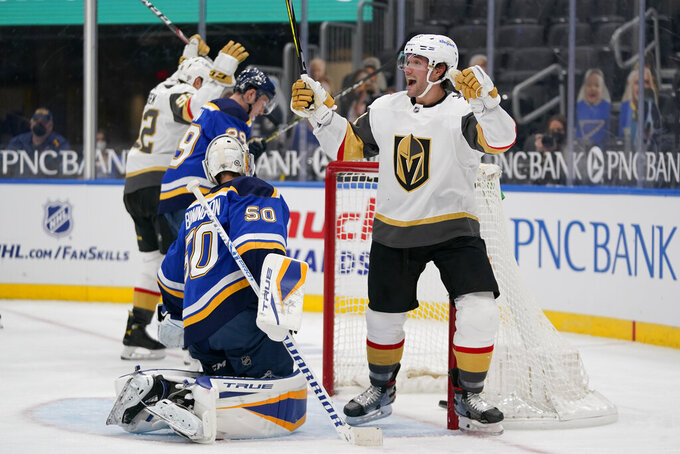 ST. LOUIS (AP) — Reilly Smith’s overtime goal lifted Vegas to a 5-4 victory over the St. Louis Blues on Friday night that snapped a two-game losing streak for the Golden Knights.

Smith’s power-play goal with 2:22 left in the extra period came off a one-timer from Jonathan Marchessault’s pass. The goal snapped a five-goal stretch without a power-play goal for Vegas.

“Our power play hasn’t been clicking the way we want it to and you kind of reinvent the wheel a little bit when you’re struggling like that to put puck in the net," Smith said. "But sometimes the best thing to do is just put the puck on the net and score an ugly one.

"I think that’s what we’re going to have to start doing a little bit more.”

Mark Stone, Tomas Nosek, Alec Martinez and Marchessault also scored for Vegas. Marc-Andre Fleury, playing after being removed from COVID-19 protocol due to a false positive, made 19 saves.

Fleury spent the last day and a half in his hotel room after testing positive upon arriving in St. Louis.

“I mean, he has a pregame ritual,” Vegas coach Pete DeBoer said. “He likes to come down and pregame skate and stretch and look at meetings on the iPad, whatever he does prior to a game, he wasn’t able to do any of that stuff. So, I thought he would battle really hard and I’m sure he’ll feel more comfortable tomorrow.”

It was Vegas’ first win in St. Louis in five tries. The Blues still have not ever lost to the Golden Knights in regulation (6-0-5).

“It seems like they’re always special teams games and for some reason their power play always gets us,” Smith said. “So, there was a lot of back and forth when we play them and a late goal and overtime goals and you know that’s not the way we want to play but you know we just have to find a way to win those games.”

Vladimir Tarasenko and Zach Sanford each had a goal and an assist, and Ryan O’Reilly also scored for the Blues. Jordan Binnington made 35 saves as St. Louis lost its third straight game in overtime — playing in its fourth consecutive OT game — but ran its points streak to seven games (4-0-3).

Peron’s power-play goal, set up by a falling Brayden Schenn, gave the Blues a 4-3 lead with 9:20 left in the third. Martinez answered 47 seconds later.

Vegas took control with two goals in a 35-second span late in the first period.

Stone got it going with a tip for his seventh of the season. Marchessault banged home a rebound off Smith’s shot to make it 2-0 with 4:31 left in the first.

O’Reilly got the Blues back in it with a one-timer at the 5:14 mark of the second period, set up by some slick tic-tac-toe passing by Justin Faulk and Zach Sanford.

“We know there’s never an easy night, especially when you play teams a couple times in a row,” O’Reilly said. “You get to know each other well and it makes the games a bit more stingy. We know it’s going to be difficult and that’s when you’ve got to focus on the little details, all the little things matter, and we have to be better at them tomorrow.”

Nosek regained the two-goal advantage for Vegas with a one-timer that made it 3-1 midway through the second.

Tarasenko, playing in just his third game of the season after rehabbing a surgically repaired shoulder, cleaned up a rebound off a rush by Sammy Blais to cut Vegas’ lead to 3-2 with 6:24 left in the second. It was Tarasenko’s first goal in nearly 17 months, dating to Oct. 21, 2019.

Sanford’s power-play goal at the 4:53 mark of the third period tied it at 3. The Blues have scored a power-play goal in six straight and entered the game No. 1 in the NHL with the man advantage in March.

Vegas defenseman Alex Pietrangelo was supposed to play his first game at Enterprise Center against his old team, but instead returned home after suffering an upper body injury against San Jose last Saturday.

Pietrangelo played his first 12 seasons for St. Louis and was the captain on the Blues’ 2019 Stanley Cup champion team. He signed a seven-year, $61.6 million contract with the Golden Knights in the offseason.

St. Louis signed Binnington to a six-year, $36 million contract extension on Thursday. ... Blues center Oskar Sundqvist returned to the lineup after missing the last two games due to an undisclosed injury.