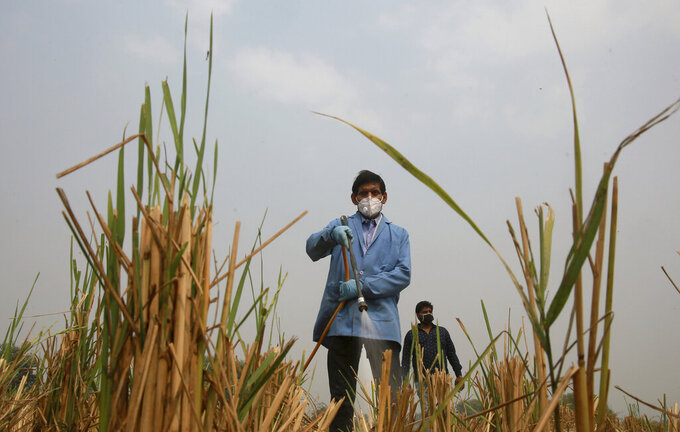 A Pusa Institute of Technology worker sprays bio-decomposer to convert agricultural waste into compost in a field, in a bid to contain farmers from setting fire to their post-harvest fields that need clearing for the next crop season, in New Delhi, India, Tuesday, Oct. 13, 2020. The smoke from neighboring states travels to New Delhi, leading to a surge in pollution levels in the city of more than 20 million people, exacerbating what is already a public health crisis. But the microbial liquid solution that softens the hard stubble and turns it into compost, thus ruling out the need to burn the agricultural crop, is being billed as a game-changer that can help reduce smoke emissions from India’s vast farmlands. (AP Photo)

The Air Quality Index in New Delhi rose past 270, according to SAFAR, India’s main environment monitoring agency, after agricultural fires in neighboring states sent smoke billowing across the city. The World Health Organization deems anything above 25 as unsafe.

The national capital, one of the world’s most polluted cities, enjoyed a respite from air pollution up until September in part thanks to a virus lockdown. But with industrial activities resuming and cars back on the roads — along with the onset of cooler weather and less wind — air quality in the city has once again fallen to unhealthy levels.

October is also the time of year when farmers in neighboring regions, including the states of Haryana and Punjab, set fire to their post-harvest fields to clear them, despite there being a ban on it.

That smoke travels to New Delhi, leading to a surge in pollution levels in the city of more than 20 million people and exacerbating what is already a public health crisis.

Health experts say high air pollution levels over a prolonged period have compromised the disease resistance of people living in New Delhi, making them more susceptible to the coronavirus.

Over the years, the pollution crisis in New Delhi has piled public pressure on the government to tackle the root causes.

Authorities have often introduced a system that restricts many private vehicles from taking to the roads for two weeks. It has also ordered firefighters to sprinkle water from high-rise buildings to settle the dust, tried to snuff out garbage fires and ordered builders to cover construction sites to stop dust from enveloping the area.

But the problem continues to persist.

During peak pollution periods last year, air pollution levels in New Delhi sometimes soared even off the measurable scale. A dark yellow haze blanketed the city for several days, forcing schools to close and flights to be diverted.

The Indian Agricultural Research Institute says it has developed a microbial liquid solution that softens crop stubble and turns it into compost, thus ruling out the need to burn the agricultural crop.

The watery solution is made of four capsules that cost a little less than half a dollar and can be used for the rapid decomposition of crop residue.

K Annapurna, a senior scientist at the public institute, said the solution can help with pollution levels while at the same time retaining the essential nutrients in the soil that are otherwise damaged when the residue is burned.

Anumita Roychowdhury, executive director at the New Delhi-based group Centre for Science and Environment and an air pollution expert, said that ensuring millions of farmers across multiple Indian states have timely access to the microbial solution will remain a challenge.

Roychowdhury also said India needs to have a certain preparedness in the health care sector because the upcoming winter season and toxic air will exacerbate respiratory problems in people.

“Our health care system will also have to respond adequately,” she said.