So many events in Melbourne, until COVID disrupted the plan 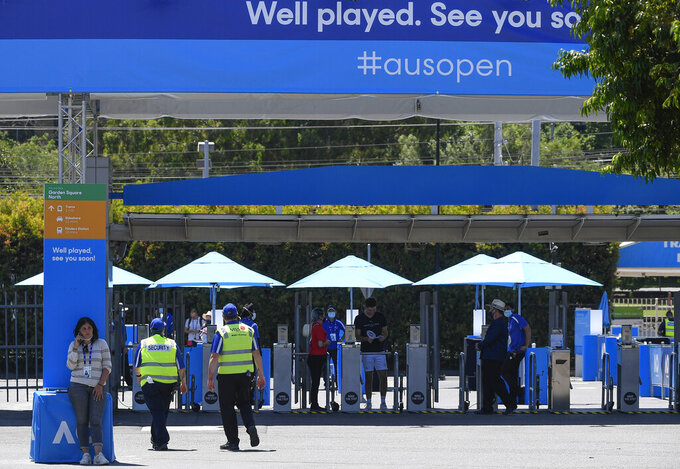 Officials man the entry gates to Melbourne Park in Melbourne, Australia, Wednesday, Feb. 3, 2021. The Australian Open site has the feel of a major this week with six tournaments being contested at Melbourne Park. Usually the tuneup tournaments Down Under are spread around the capital cities and some of the biggest stars have time off competitive play in the week before the first Grand Slam of the season. Not this year. The COVID-19 pandemic has changed the entire preparation for the Australian Open. (AP Photo/Andy Brownbill) 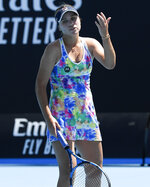 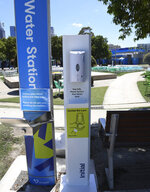 MELBOURNE, Australia (AP) — Erima Nishimura sure picked a decent day to bring her 9-year-old son, Yoshiharu, to Melbourne Park for the first time to see some tennis.

So much tennis: There were 89 matches on the schedule Wednesday, featuring Serena Williams, Naomi Osaka, Stan Wawrinka and eight other Grand Slam singles champions.

It’s all part of a six-tournament setup meant to help players who had to spend 14 days in hotel quarantine prepare in short order amid a pandemic for the Australian Open — yes, a half-dozen tournaments, and all held at one site, the venue where the year’s first Grand Slam event begins on Monday.

“I feel like things are coming back to somewhat normal,” said Sofia Kenin, the defending Australian Open champion, who won a three-setter Wednesday that was part of the Yarra Valley Classic. “It’s obviously nice to see a lot of matches.”

Things got more complicated later Wednesday, when the state government announced that a worker at one of the tournament's three Melbourne quarantine hotels had tested positive for COVID-19. That meant any players, coaches or officials who quarantined at the Grand Hyatt would have to isolate until they returned a negative test for the virus.

Tennis Australia responded by calling off all play at the tuneup tournaments scheduled for Thursday.

Things had been going smoothly, with health authorities reporting earlier Wednesday that Melbourne hadn’t had any locally transmitted COVID-19 cases for weeks.

Nishimura, who is from Tokyo and moved to Melbourne 18 months ago, and Yoshiharu got to see Osaka, who collected one of her three Grand Slam trophies at Melbourne in 2019, beat Katie Boulter 3-6, 6-3, 6-1 on Margaret Court Arena.

“This Australian Open is very happy for all people living in Melbourne, I think,” said Nishimura, who bought tickets especially to see Osaka play and then waited in a small group of fans above the player exit to collect a special memento. "This is the first time I’ve seen her play — have only seen her on television. Now we've got her autograph.”

Even Osaka herself said she planned to head out to the courts to sit in the stands and watch others play.

“I just feel like this whole situation is a bit unusual,” Osaka said, “because we’re at the Australian Open — like, where it’s being held, but we’re not playing it quite yet.”

As well as three WTA tournaments, there's the 12-team ATP Cup, featuring top-ranked Novak Djokovic, No. 2 Rafael Nadal and most of the top 10 players, and two other ATP events going on this week.

That's a lot of tennis players and their entourage to transport, feed and to ensure adequate social distancing.

For some, the glut of tennis at Melbourne Park has the vibe of majors in times gone by — before a Grand Slam stadium had a retractable roof — when rain washed out play and those matches had to be crammed onto different days. For others, like British player Dan Evans, it felt like going back to junior tournaments, when it was the norm for multiple competitions to run concurrently.

“They have obviously done a great job to get so many playing opportunities out there. The beauty of this is, if you lose ... you can just go straight back out and prepare — you’ve not going to travel anywhere," he said. “Obviously practice courts are not ideal right now, but there’s plenty off-site."

And there's fans — something fresh to the mix for players who've become used to playing to empty stands in the COVID-19 pandemic.

Capacity has been capped at 25% this week, allowing some extra space for the players to play and practice, something they've sorely missed while spending two weeks in hotel quarantine. It's expected to rise to 50% for the Australian Open.

Usually, the lead-up tournaments for the Australian Open are held in other state capitals and the top players tend to have the week off before the first major of the season. Not this time. The ATP Cup, which was played in Perth, Brisbane and Sydney last year, is now confined to two show courts at Melbourne Park.

Djokovic's team won the inaugural title last year, and was followed from one venue to the next by a large group of Serbian fans.

They were back again for Serbia's opening match against Canada, waving flags and chanting, but that kind of revelry was missing on Wednesday when the Canadians lost to Germany in the morning group match.

The crowd numbers on some courts were only in the hundreds or sometimes dozens in the middle of a week when local children have just returned to school. The Australian Open is usually held in the southern summer holidays, but is being held three weeks late.

Still, organizers were expecting about 30,000 fans in Melbourne Park each day next week.

“It makes a difference. It’s fun to play when people come and watch, support,” Elise Mertens said after her win over Caroline Garcia. “We’re in Melbourne playing in this beautiful event, beautiful site. There’s nothing to complain about."