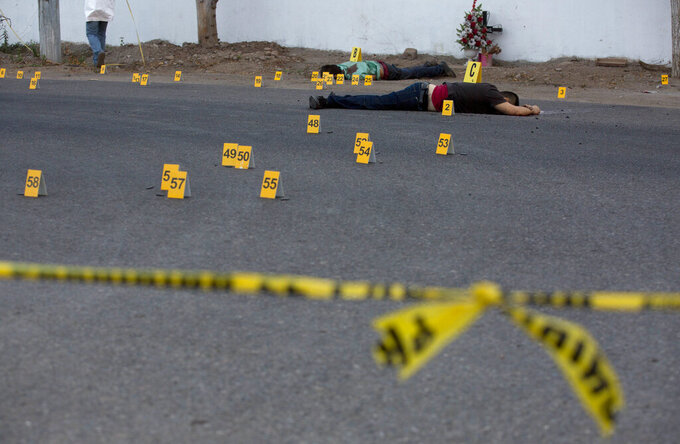 FILE - In this June 29, 2017 file photo, investigators mark the spot where spent bullet casing fell next several bodies lying on a road in the town of Navolato, Sinaloa state, Mexico. For people in Mexican towns and villages where criminal gangs, armed groups and drug traffickers hold more sway than the state, the novel coronavirus is just the latest danger. The threat of death and the inability to move freely are nothing new. (AP Photo/Enric Marti, File)

MEXICO CITY (AP) — For people in Mexican towns and villages where criminal gangs, armed groups and drug traffickers hold more sway than the state, the novel coronavirus is just the latest danger. The threat of death and the inability to move freely are nothing new.

From the northern border to the western sierra to the Gulf Coast, hundreds of Mexican communities have been under curfew and quarantine for years. Their residents are unable to move around at night, or from their town to another under control of a different gang.

Death from a bullet or after disappearance has long been an ever-present possibility -- making the risk of coronavirus seem abstract, even as the toll grows around Mexico.

“A lot of people don’t believe it, aren’t careful, I think because of what we’ve been through,” said a woman from Tamaulipas, a northern border state long plagued by cartel violence across the Rio Grande from Texas. “They say if 10 years of war haven’t killed us, a virus isn’t going to.”

She spoke on condition of anonymity because in Ciudad Miguel Aleman, the border town where she lives, it’s dangerous to speak with journalist even about an epidemic. In Tamaulipas -- in big cities with assembly plants churning out washing machines and flat screen TVs for the U.S. market, or in remote ranching communities -- any home could be a safe house holding migrants, drugs, guns or cash.

Mexico is headed into the critical moment of the pandemic with 24,905 confirmed cases and 2,271 known dead, but the violence hasn’t stopped. The 34,000 murders last year surpassed any year on record. And last month’s toll of 3,000 homicides was highest for any month since July 2018, according to official data. Another 61.000 people are missing.

“We’ve been living 10 years in quarantine,” the woman said. “It’s not hard to stay home anymore.”

In some places, the changes are just aesthetic.

Agua Prieta, a desert border outpost across from Arizona, is a drug-smuggling spot and a place where migrants cross illegally into the U.S.

A humanitarian worker there recently noticed a street-level drug dealer was wearing a mask, and the local crime group was giving away food and other necessities.

It’s a public relations tactic seen in various parts of Mexico during the past month to curry favor with locals; among those handing out relief kits were the daughter of kingpin Joaquin “El Chapo” Guzman. López Obrador has denounced it, but said it was inevitable.

In the rugged Tarahumara mountains of northern Chihuahua state, where organized crime controls drugs, the illegal logging business and most movement, patrolling soldiers advise residents to take precautions to avoid COVID-19, according to a resident in Sisoguichi.

But the government’s presence has always been perfunctory and fleeting. The criminals are the authority and they don’t pause or seem much concerned about the health emergency.

“It can sound really cold, but if we compare the dead from violence and those from the pandemic, the first are more,” said a local who declined to be identified, because days earlier a group had entered the town shooting, killing four and kidnaping two more, one of whom later turned up dead. “Using a mask and gloves doesn’t protect you from bullets.”

The man doesn’t minimize the virus. With the nearest medical specialist 300 kilometers (about 185 miles) away, he can imagine what would happen if the coronavirus spread through ravines connected by sinuous dirt roads. He’s also worried about the economic impact. But he said others are skeptical.

“A lot say its rumors to scare the people, that it’s not going to come there, that it’s made up by the government,” he said. “There’s a lot of disbelief.”

There is a “desensitization” toward violence for those who live close to death, said psychotherapist and trauma expert Susana Uribe. “If you already live scared, how is the virus going to scare you?”

But there are signs that some Mexicans are scared, and are trying to protect themselves.

Nobody knows violence like residents of the western state of Sinaloa, but unlike those in some other remote outposts, they also know coronavirus, especially in the capital. The state saw 92 people succumb to the virus in a month; that same time, 74 were murdered.

Even as life goes on in working-class neighborhoods of the state capital Culiacan -- a city where dead drug capos rest in more luxury than most living residents -- it appears that some in Sinaloa are taking the virus seriously.

“The drug traffickers, the bosses, are afraid, they’re in their bunkers fearing infection. They know they can die from it”, said Juan Carlos Ayala, expert in violence at the Sinaloa Autonomous University. “They are worried when someone arrives from Culiacán. And of course, the wave of violence keeps going. They’re killing each other the same as before”

In the mountains, the domain of the Sinaloa cartel, a resident said some have stocked up with essentials to avoid having to travel to Culiacan, and you see fewer. cars on the highway.

Néstor Rubiano, a mental health expert with Doctors without Borders, said doctors have trouble getting to towns in the mountains of Guerrero state, and competing criminal groups control access. This is the land of opium poppy production, with checkpoints manned by rifle-toting narcos.

So, he said, some residents decided to self-quarantine.

“If the virus came and someone got sick, where would they go? Because the closest hospital is hours away, that is if they take them,” Rubiano said. “And are they going to be able to get out? Because if the opposing group is there they’ll kill them en route.”

Others can’t isolate themselves so easily.

In Aldama, in the highlands of southern Chiapas state, official recommendations for COVID-19 have been put into practice, according to Adolfo López, a community leader. Checkpoints have been set to control who enters and leaves the community; to minimize the chance of infections, religious and community activities have been suspended. Antibacterial gel is plentiful.

But none of that matters when shots ring out, and everyone runs.

In these densely forested mountains, the communities are primarily indigenous, but there is a heavy paramilitary presence involved in land disputes. When entire communities are forced to flee their land, they hide in the forest, sleeping under tarps until the situation calms and they can return.

Just last week, eight homes were damaged by gunfire. People are afraid to light cooking fires because the smoke could draw their pursuers, Lopez explained.

“We’re living under fire and facing aggression; that’s a bigger concern than coronavirus,” he said. “Furthermore, the government’s recommendation is to stay at home, but what home?”