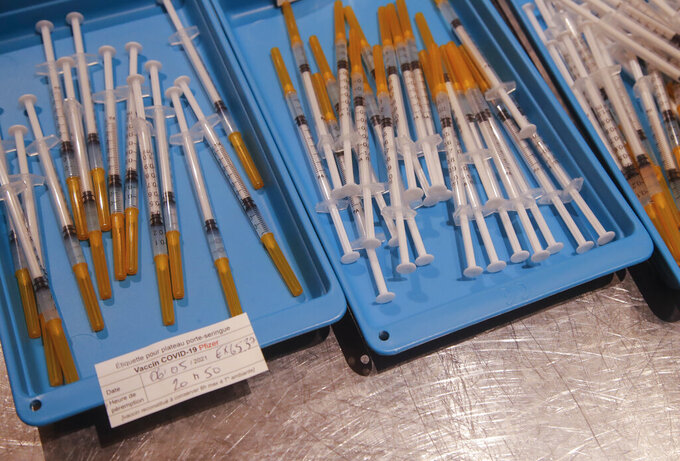 In this May 6, 2021 file photo syringes with the Pfizer vaccine against COVID-19 disease are ready at a new vaccination center in Paris. Social media influencers in France with hundreds of thousands of followers say a mysterious advertising agency offered to pay them if they agreed to smear Pfizer's COVID-19 vaccine with negative fake stories. The smear effort drew a withering response from French Health Minister Olivier Veran, who called it "pathetic." (AP Photo/Michel Euler, FIle)

LE PECQ, France (AP) — Social media influencers in France with hundreds of thousands of followers say a mysterious advertising agency offered to pay them if they agreed to smear Pfizer’s COVID-19 vaccine with negative fake stories.

French YouTuber Léo Grasset was among those contacted. He said Tuesday that he was offered a potentially lucrative but also hush-hush deal to make bogus claims that Pfizer's vaccine poses a deadly risk and that regulators and mainstream media are covering up the supposed dangers.

Grasset, who has 1.1 million subscribers on YouTube, says he refused. Other France-based influencers with sizable audiences on Twitter, Instagram and other platforms also said they were contacted with similar offers of payment for posts.

The person who contacted Grasset identified himself as Anton and said his agency has a “quite considerable” budget for what he described as an “information campaign” about “COVID-19 and the vaccines offered to the European population, notably AstraZeneca and Pfizer.”

Specifically, Anton asked for a 45- to 60-second video on Instagram, TikTok or YouTube to say that “the mortality rate of the Pfizer vaccine is 3 times greater than the AstraZeneca" and querying why the European Union is buying it.

“This is a monopoly and is causing harm to public health," Anton claimed of EU's purchases.

He refused in a follow-up email to divulge who is financing the disinformation campaign, saying: “The client prefers to remain incognito.”

Grasset shared the email exchanges with The Associated Press.

“It's pathetic, it's dangerous, it's irresponsible and it doesn't work," he said.

The person who contacted Grasset said he works for an advertising agency called Fazze. A website for Fazze used to give a London address but that had been scrubbed from the site on Tuesday. Companies House, where British firms are registered, has no record of Fazze.

The AP sent emails requesting comment to a contact address listed on the website and to the email address used by Anton. Neither elicited an immediate response.

Anton's emails included a password-protected link to a set of instructions in error-strewn English for the would-be campaign.

It said influencers who agreed to take part shouldn't say that they were being sponsored and should instead “present the material as your own independent view.”

Other instructions were that influencers should say “that mainstream media ignores this theme” and should ask why governments are purchasing Pfizer.

A trainee doctor in southern France with tens of thousands of followers who was also approached for the smear effort told French broadcaster BFMTV that he was offered more than 2,000 euros ($3,000) for a 30-second video post.

Grasset said that given the large size of his YouTube following, he possibly might have earned tens of thousands of euros (dollars) had he agreed to take part.

Instead, he wrote back that “I can't work for a client that won't give its name and who asks me to hide the partnership.”

“Too many red flags,” Grasset said in an interview with AP. “I decided not to do it.”

He said the disinformation effort drives home the need for people "to be super, super cautious” about what they see online.

“We creators on YouTube, on internet, Instagram, et cetera, we are at the center of something going on like an information war," he said. "We, as creators, need to set our standards really high because it's, I think, just the beginning."

AP journalist Jill Lawless in London contributed to this report.