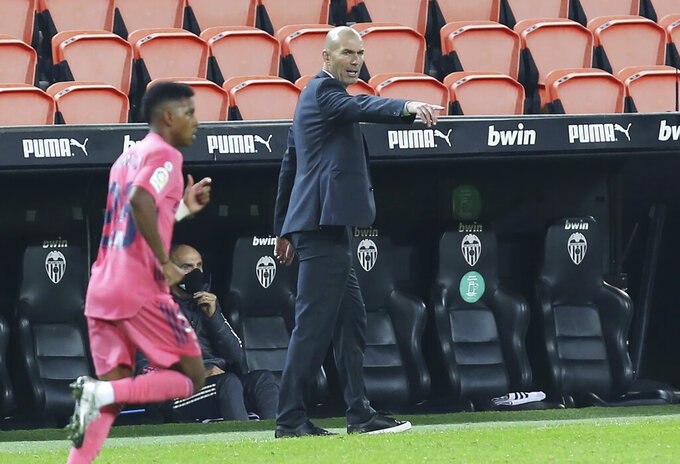 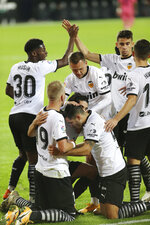 MADRID (AP) — One lapse from the penalty spot didn't deter Carlos Soler, who made amends with three penalties against Real Madrid.

Soler saw his initial penalty attempt saved but felt confident enough to return for another try. Then another, and then another. The young midfielder ended up converting three penalty kicks for his hat trick as Valencia ended its winless streak with a 4-1 win over Real Madrid in the Spanish league on Sunday.

“I had doubts for a moment but then I decided to take it again,” the 23-year-old Soler said. “It gave me confidence for the other ones as well.”

Real Sociedad stayed at the top with a 2-0 win against a virus-depleted Granada team which was filled with youth-squad players. Granada finished without the minimum of five registered first-team players set out in the regulations and could be punished for using an illegal lineup.

Madrid also faced problems because of the coronavirus as Eden Hazard and Casemiro couldn't play against Valencia because of positive COVID-19 results.

"Everything went wrong in this game," Madrid coach Zinedine Zidane said. “Three penalties, an own-goal... It's hard to explain.”

Madrid, which had won five of its previous six league games, took the lead in the 23rd minute with a goal from Karim Benzema, who left injured near the end of the match.

Soler equalized from the penalty spot in the 35th after a handball by Lucas Vázquez. Soler saw his penalty saved by Madrid goalkeeper Thibaut Courtois but got a second chance after video review determined that players from both teams encroached into the area before he took his shot.

Valencia went ahead with the own-goal by Varane in the 43rd. VAR ruled that a ball that ricocheted off Varane’s leg crossed the goal line before Courtois could swipe it away.

Soler’s second goal from the spot came after Marcelo fouled Maxi Gómez in the 54th.

VAR determined that Sergio Ramos touched the ball with his hand inside the area to prompt the third penalty converted by Soler in the 63rd.

Valencia was coming off a draw and three losses. It moved to ninth place with the win. Madrid dropped to fourth, four points off the lead with a game in hand.

Granada entered the match against Sociedad with seven first-team players available after 10 positive COVID-19 results were detected within the club in the last 10 days. Several players and coaches in close contact with those infected also could not participate.

Granada's goalkeeping coach, Juan Carlos Fernández, was in charge as manager Diego Martínez and an assistant could not be present.

Only four first-team players were on the field after Jorge Molina was substituted in the 77th minute, which could lead to the equivalent of a 3-0 loss for Granada.

Granada's bid to have the game postponed was rejected because it had enough players available to play.

The Spanish league said it opened an investigation into Granada for allegedly failing to follow health safety protocols during the pandemic.

Nacho Monreal put Sociedad ahead from close range in the 22nd, and Mikel Oyarzabal added the second by converting a penalty kick in the 27th after a handball inside the area.

“It was a good game,” Monreal said. “Our dynamic has been good. We have been playing well. And it was the same again today. We are happy with the performance of the team and with the victory.”

Willian José missed a chance to score the third when his 54th-minute penalty kick was saved by youth-squad Granada goalkeeper Ángel Jiménez, an 18-year-old player.

It was the fifth straight league win for Sociedad, which played the final minutes a man down after a red card for Robin Le Normand for halting a counterattack with a foul.

Valladolid beat Athletic Bilbao 2-1 at home for its first win of the season. The result moved the team owned by former Brazil great Ronaldo out of last place.

Alavés salvaged a 1-1 draw at Levante despite playing most of the game with 10 men after the Édgar Méndez's dismissal in the 34th.